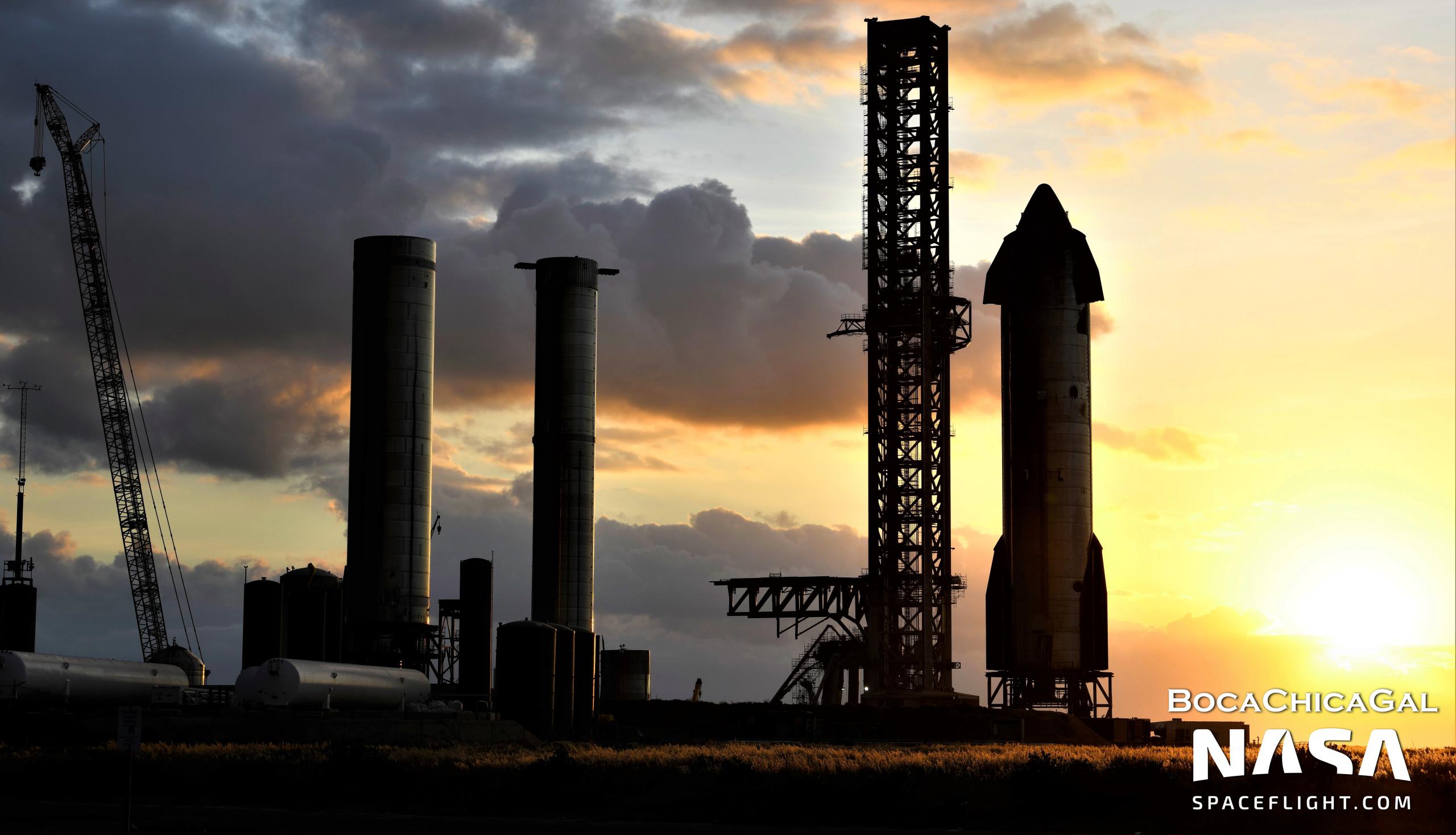 SpaceX appears to have begun tying up a number of loose ends at Starship’s first orbital launch site, potentially setting the stage for major rocket testing CEO Elon Musk has stated could begin next month.

The list of tasks started or completed in just the last week or two is significant and each one is singularly focused on similar goals: pave the way for SpaceX to finish testing the first orbital-class Starship and Super Heavy booster and prepare for the first orbital launch attempt of the largest rocket ever built. While SpaceX’s progress towards those goals over the last several months has been decidedly slow relative to the pace of similar work completed in the very recent past, the nominal timeline Musk recently sketched out suggests that things could once again start to happen at a dizzying rate.

Kicking off a jam-packed two weeks of minor to major finishing touches, SpaceX rigged Starbase orbital launch tower’s rocket-catching arms to a system of pulleys, and ‘drawworks’ in a process known as “reeving.” Thousands of feet of rope were first threaded from up, down, and through the ~145m (~440 ft) tower to act as a temporary guide for the next step. Once fully rigged, anchored, and attached to the start of the steel cable actually meant to operate the system, the tower’s ‘drawworks’ was activated for the first time to reel in the guide rope – simultaneously installing the steel cable. By November 9th, the process was more or less complete, leaving the steel cable firmly attached to the tower’s giant rocket-catching arms and able to carry their significant weight.

SpaceX hasn’t quite finished installing those arms and does not appear to have picked up the slack in the cable that will eventually lift them up and down the tower, but the arm assembly’s first real move is likely just a few weeks away. Notably, a bit of scaffolding around the tower’s ‘legs’ still needs to be removed before the catch arms can freely roll up and down rails welded to their exteriors. SpaceX will also need to complete shakedown testing of the arms themselves, ensuring that the massive structures’ hydraulic, electrical, and mechanical systems are all working properly.

In the near future, those arms will be used to grab, lift, and install Super Heavy boosters and stack Starships on top of them, while SpaceX also hopes to eventually use them to catch boosters and ships out of mid-air. At least for the former role, a separate arm visible about halfway up the tower in the photo above will also be crucial. Known as the tower’s Starship quick-disconnect (QD) arm or claw, SpaceX has also made significant progress on the structure, practically completing it in the last few days.

Designed to fuel Starship and stabilize the top of Super Heavy with its claw, the Starship ‘QD arm’ is also able to swing left and right both to quickly back away during launches and to make room for the catch arms during rocket catches and ship/booster stacking operations. Last week, SpaceX technicians finished plumbing the arm, which requires thousands of feet of insulated steel tubes to connect to the pad’s propellant tanks. This week, on November 23rd, SpaceX installed the last major component of the arm – the actual quick disconnect (QD) mechanism that will connect to Starship to supply power, communications, and propellant.

A few small actuators likely still need to be installed and the QD mechanism itself will have to be fully connected to pad systems but the QD arm now appears to be more or less complete and should soon be ready to fuel Starships installed on top of Super Heavy boosters.

Last but not least, SpaceX performed multiple tests of the pad’s ‘orbital launch mount’ – the giant, steel structure that will support Super Heavy, hold the booster down during testing and before liftoff, and supply it with thousands of tons of propellant. On November 21st, SpaceX completed the first of those tests, seemingly venting an unknown gas out of the mount. More likely than not, it was the first simultaneous test of all 20 of the mounts Raptor Boost engine gas supplies, which – having no need to reignite in flight – will rely on ground gas supplies for ignition. Each of Super Heavy’s 20 outer Raptor engines has a small umbilical and quick disconnect mechanism, resulting in what is likely the most mechanically complex rocket launch mount ever built.

On November 22nd, the orbital launch mount’s booster quick disconnect panel actuated for the first time, showing off the first glimpse of how it will move forward to connect to Super Heavy after a booster is installed on the mount. To prevent its sensitive components from being practically incinerated each launch, the mount’s QD panel will also need to rapidly move away from Super Heavy just before liftoff.

Aside from simply avoiding direct impingement from the several-thousand-degree plume created by 29-33 Raptor engines at full thrust, that movement will also tie into some kind of hood, seamlessly actuating hatches that will close to truly protect the device. That hood was itself spotted for the first time on November 21st and will likely be installed on the launch mount and over the naked QD mechanism in the very near future.

Finally, over the last week or so, SpaceX has begun installing a number of new pipes on and around the launch mount, likely assembling a water deluge system that will help manage the extreme thermal and acoustic environment created by the most powerful rocket in history shortly before and after liftoff. When activated, a spray bar circling the mount’s full interior circumference will likely unleash several tons of water per second in a giant artificial waterfall, hopefully preventing Super Heavy from damaging itself with the sheer sound produced by its Raptor engines or violently eroding the surrounding pad or launch mount legs with its plume.

Ultimately, once all the tower, arm, and mount work described above is completed, the only obvious thing standing between the orbital launch pad and the first Super Heavy booster testing and first orbital Starship launch will be the delivery of liquid methane fuel, which could easily begin any day now.