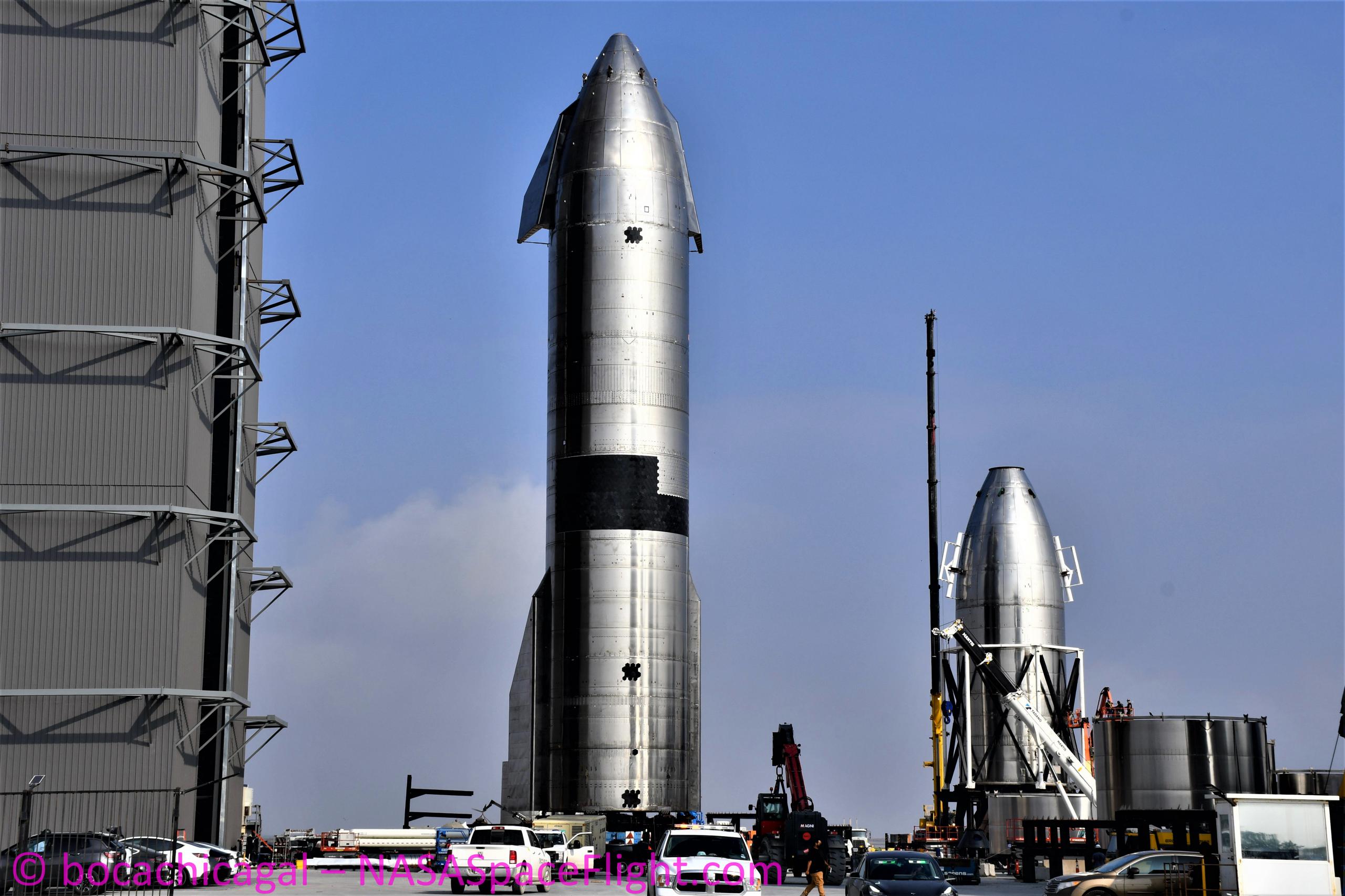 Update: Right on schedule, SpaceX has transported Starship serial number 15 (SN15) from its Boca Chica rocket factory to a launch and test site just down the road.

SN15’s pad arrival comes just nine days after Starship SN11 – the last in a batch of four first-generation prototypes – exploded in midair some 30 seconds before a planned landing. While minor, SN11’s midair failure was undoubtedly a step backward relative to Starship SN10, which (briefly) became the first full-size prototype to land in one piece less than a month prior. Both SN8, SN9, and SN10 made it further into their identical flight tests, leaving SN11 somewhat high and dry and putting extra pressure on Starship SN15.

After Starship SN8’s unexpectedly successful December 2020 test flight, in which the rocket made it just a dozen or so seconds away from soft landing after more than six minutes in flight, SpaceX made the decision to scrap Starship SN12 and kill SN13 and SN14 before assembly could begin. Effectively a gamble that SN8-SN11 would produce enough of a foundation for future testing to start off on, it’s hard to say if that gamble paid off.

All four Starship flights managed the extraordinary feat of more than four minutes of powered flight and spent two minutes free-falling like no rocket ever before them, but they also made it clear that both Raptor and autogenous pressurization (using gasified propellant to pressurize Starship’s tanks) are not quite mature enough for reliable launches and landings. Featuring “hundreds of improvements,” many of which were hopefully designed to tackle some of those shortcomings, it’ll be up to Starship SN15 to attempt to carry that torch forward – and, with any luck, further than any prototype before it.

After SpaceX unexpectedly used a Monday road closure to deliver its first custom-built rocket fuel tank, plans for the next Starship test campaign and launch have begun to solidify.

Most importantly, the initial schedule for Starship serial number 15’s (SN15) test campaign appears to be clear. As of Wednesday, April 7th, road closures filed by SpaceX suggest that the first of a new group of upgraded Starships will be transported from build site to launch pad as early as 11am-1:30pm CDT (UTC-5) on Thursday, April 8th. Once SN15 is installed on ‘Suborbital Pad A,’ SpaceX means to waste no time and has scheduled a 7am-12pm road closure on Friday.

As usual, the weekend will once again be free of any testing or activity requiring road closures, but SpaceX has already cordoned off noon to 8pm on Monday and Tuesday (April 12/13) to continue putting its newest Starship prototype to the test.

While road closure notices no longer offer any real detail, a few basic details can still be inferred. The April 7th closure, for example, warns that SpaceX only plans to intermittently close the highway but not Boca Chica Beach – implying that the window poses no threat to residents or beachgoers. Historically, that means that something will be transported – likely Starship SN15, in this case.

On Friday, SpaceX has scheduled a full five-hour closure of both the highway and beach, implying that some kind of testing is likely on the books. The same goes for Monday and Tuesday, but with longer eight-hour closures.

More likely than not, assuming Starship SN15’s pad transport and launch mount installation goes smoothly, SpaceX will use the shorter Friday window to complete a basic ambient pressure test – filling the rocket with ambient-temperature nitrogen gas to test its complex plumbing and propellant tanks for leaks. Continuing the IFF (if and only if) string, SpaceX will then spend the weekend preparing Starship SN15 for a cryogenic proof test and thrust structure stress test – simulating the thrust of three Raptors after loading the rocket with extremely cold liquid nitrogen (LN2).

SpaceX will then most likely spend another one or two days inspecting Starship SN15 and removing the hydraulic ram used to simulated thrust from the launch mount the ship is installed on. Once SN15 and its mount are cleared, SpaceX can move into static fire testing. Given that – according to CEO Elon Musk – SN15 will debut Raptor engines with an unknown degree of upgrades, it’s reasonable to assume that SpaceX will take things relatively slowly and possibly perform more than one static fire test even if the first attempt is a total success.

If not and SpaceX continues to push hard like it did with SN10 and SN11, it’s not out of the question that Starship SN15 will be ready for its first launch attempt around Friday, April 16th or Monday, April 19th. Stay tuned for updates as SpaceX hopefully rolls the rocket to its Boca Chica, Texas launch site later today.