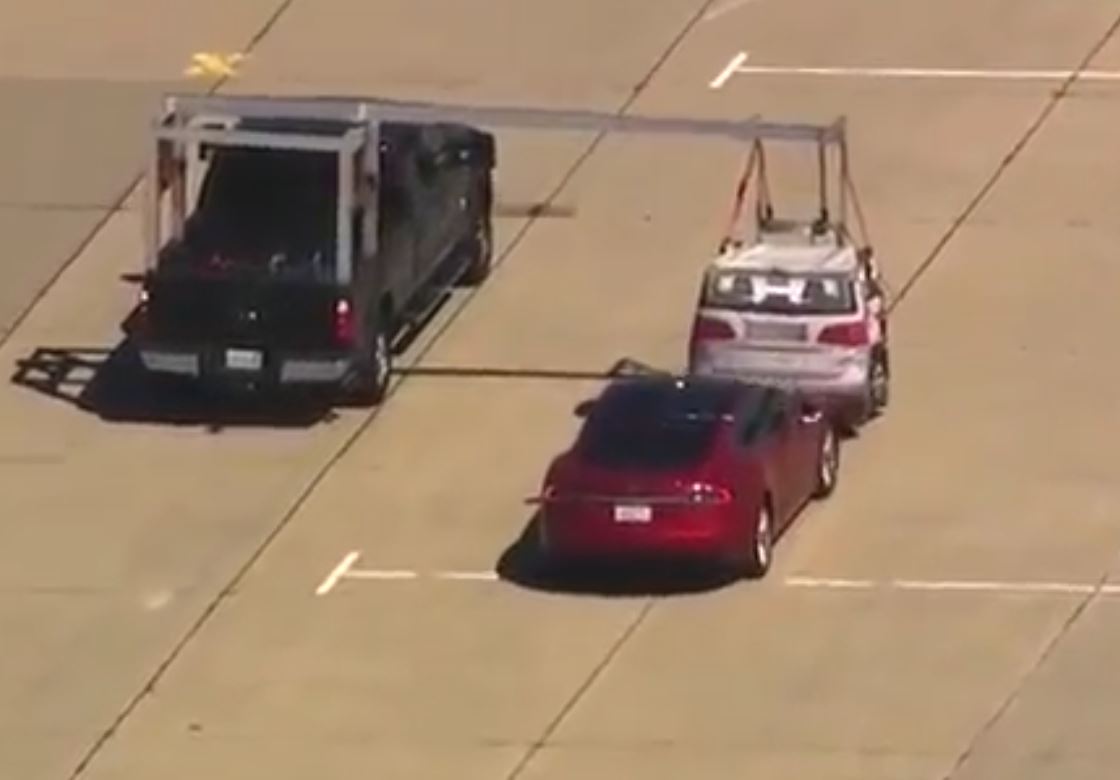 Newly found video appears to show Tesla testing or calibrating their automatic emergency braking system prior to the official release of the refreshed Model S. With several recent stories involving alleged failures of the system, the video of the test session is of particular interest.

The video appears to have been shot while Tesla engineers were evaluating automatic braking systems on a runway at the Naval Air Station in Alameda, California. Tesla has long used the facility for testing  as it is a mere 30 mile jaunt from the Fremont factory (you may recall the first sighting of the Model X test mule was also on a runway at Alameda).

Despite the video’s misleading title promising a Model 3, the  video actually shows two Tesla Model S test cars accompanied by a full-sized pick-up truck that has a soft target on a long arm. The target is typical of tests involving vehicle collision detection and crash mitigation systems. Inflatable tubes and foam panel bodies are mounted on a metal frame and then covered in vinyl. Any potential system failure during testing that leads to impact will result in minimal damage to the test vehicle. 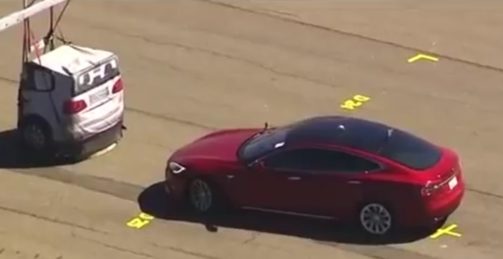 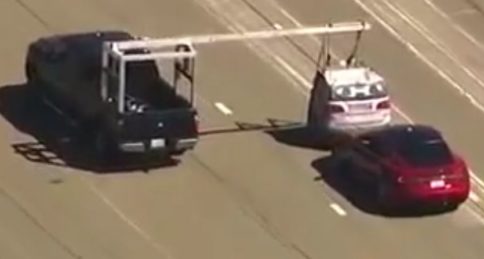 The vast acreage of the runway is ideal for this sort of test and the Tesla engineers are able to do multiple attempts on each pass. Below is a Google Maps satellite view showing runway 25 at the Naval Air Station in Alameda, Calif., site where the tests took place.

Though posted to YouTube on March 31st, the red car in the video is clearly equipped with the recently introduced rear valance and painted rocker panels. The headlights also appear to have the more even pattern of the new daytime runnings lights, though the black nose suggests either the front fascia was not new or is marked to mimic the legacy bumper. Tesla didn’t officially reveal the refreshed Model S until April 12th, meaning this prototype was captured nearly 2 weeks earlier. The proximity of the test to the release might suggest that last minute calibrations were being verified or that software was being adjusted to maximize the system’s effectiveness with the new sensors’ placement, especially those that were moved behind the fascia itself. The darker colored car appears to be an older P85.  It isn’t captured on the uploaded video doing any of the tests itself. HOV lane stickers on the rear fascia and the older non-LED headlights are clearly visible, reinforcing the likelihood that it was not a subject in this test session. The Model S’ driver appears only to be observing the movements of the red test car, following it along the runway. At one point, the driver of the pick-up truck with the test rig stops to confer with the person in the darker Model S– even nodding in the direction of the helicopter shooting the video– before resuming test runs.

While automatic emergency braking is part of Tesla’s Autopilot suite of features, it alone isn’t unique. Twenty automakers representing the entirety of the US market have already agreed to make automatic emergency braking systems standard in all new cars and light trucks by the 2022 model year. The agreement was jointly announced in mid-March (about two weeks before this video was posted) by federal regulators with the National Highway Traffic Safety Administration and the Insurance Institute for Highway Safety. The IIHS estimates vehicles with  the systems are 40% less likely to cause a rear-end crash.