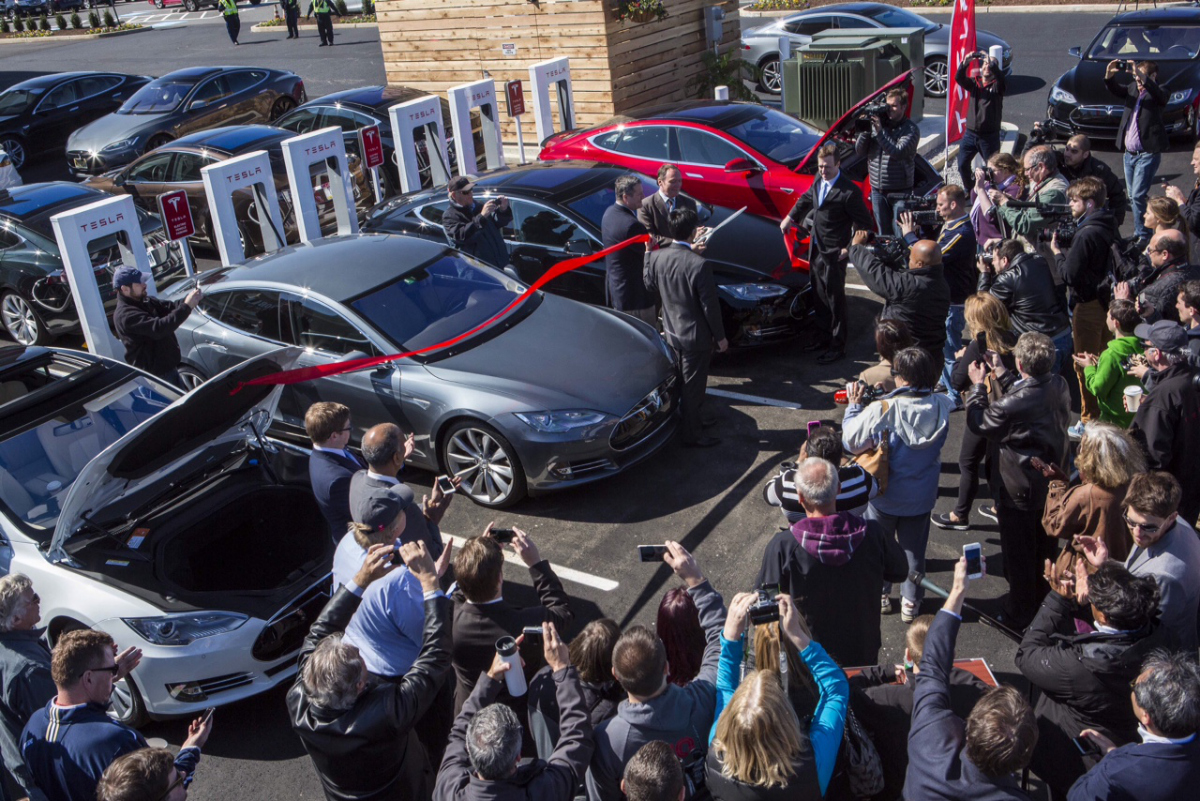 Tesla’s unique business model allows them to sell vehicles directly to consumers through both retail locations and Tesla’s online design studio. Direct-to-consumer sales of its vehicles have led to some turbulence with existing car dealerships in many states, including Utah, Louisiana, Connecticut, Texas and Michigan. New Jersey allowed Tesla to open direct sales in the state in 2015, but with conditions. New Jersey’s legislation limited the number of direct-to-consumer dealerships per manufacturer to four stores and required at least one service center in the state. Tesla CEO Elon Musk once compared local car dealers to a mafia protection racket, stating in a Tesla blog post, “The rationale given for the regulation change that requires auto companies to sell through dealers is that it ensures ‘consumer protection’…Unless they are referring to the mafia version of ‘protection’, this is obviously untrue.”

Tesla recently launched a lawsuit to overturn a sales ban put into effect in Michigan in 2014 that prevents the Elon Musk-led electric carmaker from selling directly to consumers within the state. The greatest opposition against Tesla’s plea for direct sales in Michigan comes from both auto dealers and manufacturers, who argue that Tesla disrupts the traditional franchise dealership model. Ironically, Michigan and Texas which bans Tesla’s direct sales model have public pensions that are significant investors in the Silicon Valley company. However, that isn’t the only financial interest states have in Tesla. All states in the US rely heavily on sales tax to generate revenue. States without stores are forcing owners to purchase and service their vehicles out-of-state, missing out on sales tax in the process, a major revenue loss. Bill Wolters, of the Texas Automobile Dealers Association, is claiming that the introduction of Tesla into the Texas car market would “reduce competition”, and will incur costs for Texas. However, this argument assumes that dealers are creating added value for their consumers, and if that argument holds, then dealers should be able to keep customers in the market after Tesla enters. Additionally, Tesla is competing against other manufacturers and not franchises. Out of a presumed 400,000 reservations for the Tesla Model 3, it is estimated that roughly half originate from the United States, according to the distribution of early Model 3 reservation data from Model3Tracker.info. Using a loosely estimated assumption of Tesla Model 3 reservations originating from banned states via Model3.ocasual.com, we get the following numbers: 1,250 in Louisiana, 2,980 in Connecticut, 3,076 in Utah, 15,670 in Texas, and 4,230 in Michigan.

Navigant Research believes that sales electric vehicles, including hybrid/plug-in hybrid, are set to comprise 9 percent of total vehicle sale by 2025. Currently, EVs make up 3% of total vehicle sales, but the number in 2016 saw a 36 percent increase in sales in the US alone. In 2016, 4,500 EVs were sold in Texas, 2,470 in Michigan, 270 in Louisiana, 1,452 in Connecticut, 1,132 in Utah, and 70 in West Virginia. Texas, Connecticut, and Michigan ranked among states with some of the highest EV sales. Of electric vehicles sold total in 2016, the Tesla Model S was the leading electric vehicle with ringing in at 29,156 vehicles. The Tesla Model S also outsold its entire class of vehicles, combined. Tesla is expecting high demand for Model 3, which will start at roughly half the cost of the Model S. There are currently 223,319 estimated Model 3 reservations in the United States, far greater than the sales of comparable vehicles. The BMW 3 and 4 series which sold around 106,000 vehicles in 2016 and the Mercedes C-Class sold around 77,000 vehicles in 2016. Tesla CEO Elon Musk is expecting to produce 500,000 vehicles in 2018 and tens of thousands this year (Tesla hasn’t released Model 3 production guidance for 2017). Musk’s expectations could make the Model 3 the highest selling vehicle in its class in both 2017 and 2018. The states that ban Tesla dealerships not only miss out on sales tax revenue from Tesla vehicles but in turn create an inconvenience for residents. By instating a direct sales ban on Tesla before the launch of Tesla Model 3, states will not only lose millions of dollars in sales revenue per year but also interfere with and disrupt free market competition and consumer activities.