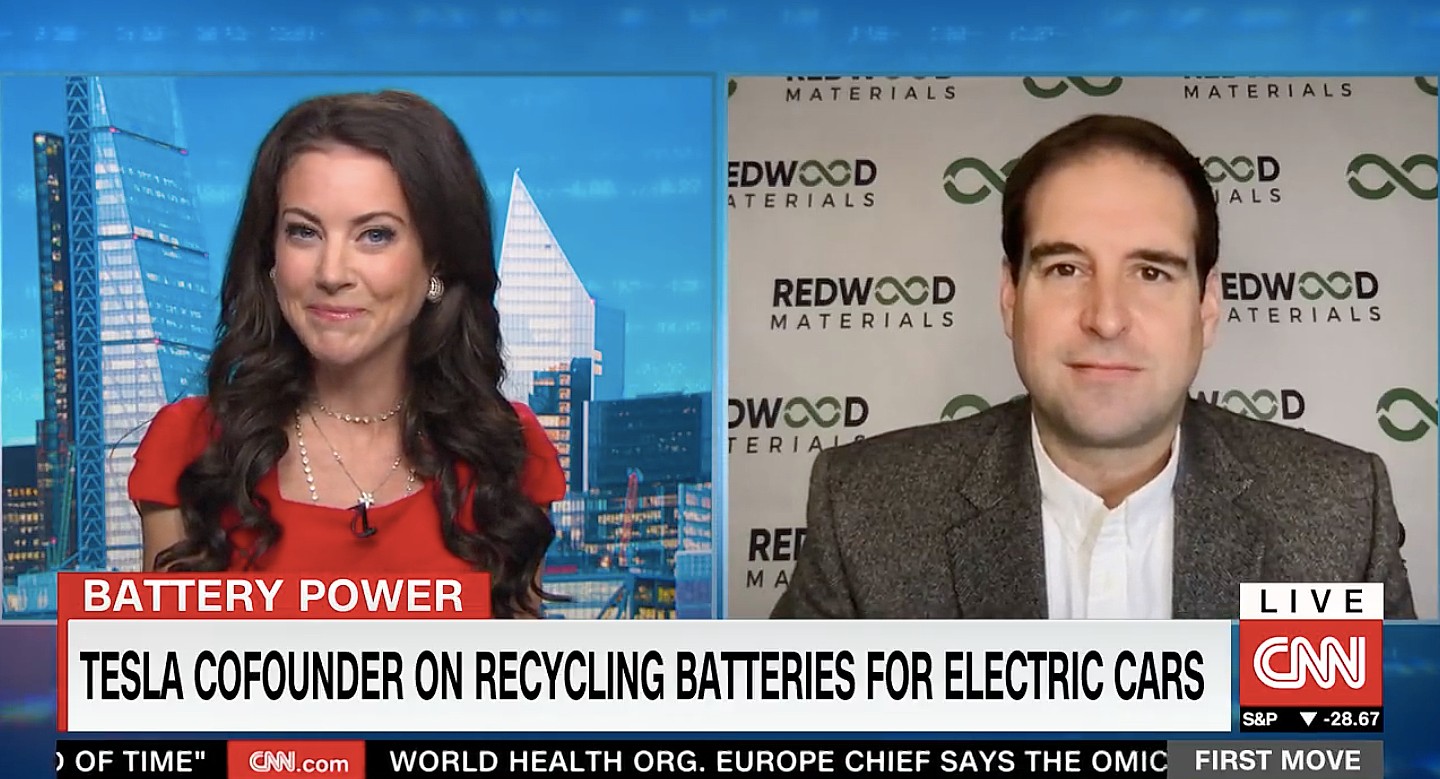 During a recent interview with CNN anchor Julia Chatterley, Tesla co-founder and Redwood Materials CEO JB Straubel shared his thoughts about what he estimates is an upcoming electric vehicle battery supply crisis, his thoughts on the adoption of recycled batteries, and his long tenure with the Elon Musk-led EV maker.

With the world’s most prominent automakers embracing electric vehicles, the demand for EV batteries is expected to rise sharply in the coming years. This is an encouraging sign, though Straubel explained that the demand shift to electric vehicles could be very challenging for automakers, particularly those that are late to the EV game. The Redwood CEO even stated that the challenges connected to battery supply in the coming years could be a “2.0” version of the ongoing semiconductor shortage.

“I think it’s going to be quite challenging for a lot of the automakers that are coming into this late. The market is making a dramatic shift. The demand shift toward EVs is phenomenal to see, it’s inspiring to see. But securing enough supply of both batteries and all the components that go into them is going to be challenging. I think we may see a version of the semiconductor shortage, kind of like a 2.0 version of that, coming in a few years as so many new automakers ramp up their EV production,” Straubel said.

Battery recycling is still in its early stages, and while companies like Panasonic are poised to use Redwood’s recycled battery components for its cell production in Tesla’s Gigafactory Nevada later this year, the percentage of batteries produced today that use recycled materials is still very small. Speaking about where he believes battery recycling would be in the near future, Straubel noted that he believes Redwood’s work would help prove that recycled batteries are a feasible solution.

“Batteries are amazing because they are so recyclable. More than 90% of the critical materials in the battery could be reused many, many times without degradation. Today, the batteries that we buy and put into our products admittedly still have a pretty small recycled material content, but this is changing fast… We’re demonstrating and showing that you can make batteries that have very high percentage (of recycled materials) and still have extremely good performance and exceptional life,” the Redwood CEO said.

Being a Tesla co-founder, it was no surprise that the Redwood CEO was asked about his long tenure at the electric vehicle maker. The CNN anchor even mentioned one of Elon Musk’s past statements, where the CEO noted that Tesla would not exist without Straubel. The former Tesla CTO responded by stating that he actually enjoyed his tenure at Tesla, and he roots for the company every day. He also noted that he believes everyone should root for his previous employer for the sake of the planet and its future.

“Tesla was an amazing adventure. I had such a fun time there helping build everything with the team. It is a wonderful team, and part of the joy of being there for so long was the caliber of the engineers and the people that made up that group. I still root for the Tesla team every single day. I love the mission and I love the company. I think we all need to root for them for the sake of the planet and the future,” Straubel noted.

JB Straubel’s interview with CNN’s Julie Chatterley could be viewed below.