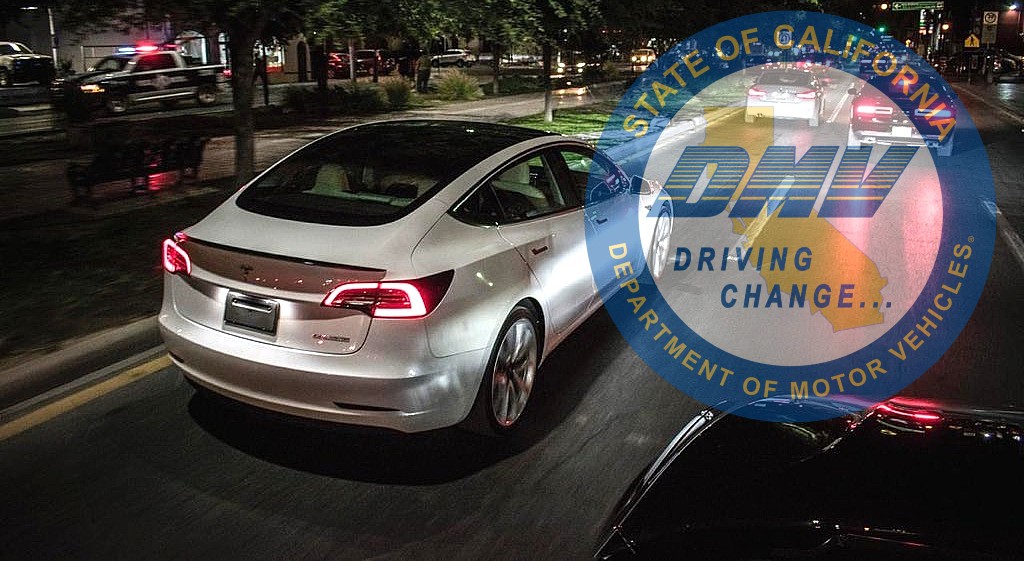 The Professor was looking forward to getting a new US driver’s license. After moving from the East Coast to teach at the University of California, it became pertinent for the 38-year old engineer and scientist to have his own driver’s license again. The coming school year would be different from the last, after all, and with face-to-face classes likely starting again, it was important for the Professor to have the capability to drive the family’s Tesla Model 3 when needed.

Having extensive driving experience overseas before moving to the United States, the Tesla owner (name witheld as requested) was fairly optimistic that he could pass the Department of Motor Vehicles’ standards. His family certainly looked forward to it, so his wife, who also teaches at the University of California, and their two kids — a 4-year-old and a 3-month old baby — headed over to the Santa Ana DMV. Unfortunately for the Professor, he made a grave mistake.

He drove a Tesla.

It is no stretch to state that California is the heart of the US’ electric vehicle transition. It’s home to Tesla’s headquarters and the company’s Fremont Factory, where vehicles like the Model 3 and the Model Y are produced. The Professor was then surprised when the DMV examiner, after what appeared to be an uneventful drive, told him that he had failed his driving test. As related to Teslarati, the DMV examiner reportedly informed the Tesla owner that he failed because the “technology in the car was not off.” When asked for more explanation, the examiner explained that the Model 3’s acceleration should have been on “Chill Mode” and the steering settings in “Comfort.”

This was inconvenient, but the Professor figured that he should probably just try again. The Model 3 owner ultimately opted to try his hand at another test in the LA DMV, especially since Teslas are extremely common in Los Angeles. For the second time, the family of four headed over to the LA DMV in their Model 3 for another test. The Professor then drove away with his examiner, but not before ensuring that the Model 3 was in Chill Mode and its steering was set in Comfort. But just like his previous attempt, the DMV examiner informed the Tesla owner that he had failed because of the Model 3’s “automatic engage.” Explaining further, the examiner stated that she could feel the brakes even when the physical brake pedal was not being pressed.

This set off alarms in the Professor and his wife, as regenerative braking is a feature that is very common among electric vehicles. It is also not in any way connected to a Model 3’s automated features. As they addressed their concerns with the DMV, the manager of the LA office told the Model 3 owners that there was no way for Teslas to disable their automated features. When the Tesla owners asked where she got her information from, the manager stated that she heard it from a customer who visited the DMV a few weeks prior. The manager then extended an offer, telling the Tesla owner that he could retake the exam that same day if he could rent a traditional car.

This was an unexpected turn for the family, but they were eventually able to secure a Toyota Camry from a rental car company an hour away. But upon presenting the vehicle to the DMV, the LA office rejected the Camry since it was not under the Professor’s name. Ultimately, the Tesla owner was not allowed to take his driving test in the rental car, though he was given the option of renting one from the LA DMV office instead for $140, $40 more than the Camry that the family had initially rented. Unfortunately for the Professor, he was given a failing score once more, despite the DMV examiner acknowledging that he seemed to have a lot of experience driving cars.

In a later message, the Professor’s wife stated that her husband would most definitely try to get his driver’s license once more, though they would probably wait some time before trying again. The last three tries were quite exhausting, and by the third driving test, the Model 3 owner stated that some DMV staff were already irate. This was not that unusual, of course, considering that the DMV is one of America’s least-liked agencies. It was just quite surprising that in the first two tests, it was the Model 3’s features that caused the examiner to fail the Tesla owner.

In a response to a Teslarati inquiry about the Model 3 owners’ experience, the CA DMV Public Affairs Office confirmed that there is no policy that prevents customers from taking their driving test in a Tesla. The office added that while the DMV currently has no specific criteria for features like regenerative braking in EVs, it is working to ensure that examiners have an understanding of the function and how it impacts driving. That being said, the agency advised that those who wish to take their driving test in a Tesla should speak to a manager first to avoid issues.

“In the event (that) a customer has questions about taking a driving test in a particular vehicle, they should ask to speak with a manager before the test. DMV employees who give behind-the-wheel tests receive updated training as necessary,” the DMV Public Affairs Office noted.

It should be noted that California is arguably the US state that is friendliest to electric vehicles. The state still offers clean vehicle rebates, and there is still a Zero Emission Vehicle (ZEV) mandate for automakers. It is then no surprise that Teslas are very popular in the state. In 2015, California accounted for 43% of Tesla’s new vehicle registrations, as per data from IHS Markit. This percentage has since decreased as Tesla started selling its cars to more territories — but its California stake is still no joke. In 2020 alone, Tesla still sold 37% of its vehicles in California, despite the pandemic and the company no longer having any access to the $7,500 federal tax credit enjoyed by competitors like the Ford Mustang Mach-E and the Volkswagen ID.4.

The California Air Resources Board (CARB), which is charged with protecting the public from the harmful effects of air pollution and developing programs to fight climate change, is among the agencies that are helping push the transition to sustainable transportation. With this in mind, it seemed appropriate to get the agency’s take on the Tesla Model 3 owners’ experience with the Santa Ana and LA DMV. After all, it would be quite challenging to fully adopt electric vehicles in California if some driving examiners or DMV offices were still unfamiliar with how EVs work, or their features for that matter.

CARB Communications Specialist John Swanton informed Teslarati that while driving tests are not CARB’s area of responsibility, the agency could work together with the DMV if there are widespread issues that could impede the greater goals of California’s transition to Zero-Emission vehicles. That being said, Swanton remarked that driver-assist technologies are becoming more and more common in modern cars, and they are widely accepted as features that enhance safety.

“While the driver’s license test is not our area of responsibility, we can say that we are not aware of any serious concerns that DMV has with the routine features found in a very wide range of vehicles equipped with driver-assistance technologies. As you are probably aware, these are in use in both EV and combustion-powered vehicles, and are widely accepted to enhance vehicle safety. These systems not only meet state requirements; they are fully certified for use nationwide by the US National Highway Traffic Safety Administration,” Swanton said.

The CARB Communications Specialist further stated that specific features like regenerative braking have long been proven to be very efficient, driver-operated controls that have been utilized since the early days of hybrid vehicles like the Toyota Prius. In this light, at least, it appears that the DMV examiner’s statements about the Model 3’s regenerative braking being an automated feature seems misinformed at best or biased at worst. “Their operation is not unlike the use of an automatic transmission. So it’s safe to say that these are not autonomous features, but rather simply part of modern automobile controls. I think this complaint may be a situation with an individual examiner that DMV management will need to speak to or clarify policy,” Swanton remarked.

There is something ironic about the idea of a Tesla driver in California failing a driving test because of the electric vehicle’s basic functions. Numerous driving schools across the globe, after all, are already embracing electric vehicles fully. Los Angeles-based Drivers Ed Direct currently operates an all-electrified fleet of cars for its students. Defensive Driving School, which was founded in 1945, actually offers a “specialty course” on Model 3s called “The Tesla Experience.” These programs suggest that driving schools across the country are already aware that sustainable vehicles are inevitable, and it is in everyone’s best interest to ensure that drivers of the future are fully acquainted with the features and behavior of electric cars.

And it’s not just the United States either. In Germany, a country famous for its mastery of carmaking, schools like Die Fahrschule have made it their mission to ensure that the next generation of drivers is properly prepared for the era of electric vehicles. In an interview with noted EV advocate Ove Kröger, one of the German driving school’s instructors, Alexander Erler, stated that there are actually advantages to teaching in an EV like a Model 3, since the vehicles provide a calm atmosphere. Remarkably, Erler noted that the presence of Model 3s in the school’s fleet actually helped dispel misinformation about electric vehicles, especially when younger drivers take their EV-skeptical parents along for their lessons.

Even oil-rich Dubai is no different. Electric vehicles are still a niche product in the Middle Eastern city, but prominent driving schools like Emirates Driving Institute (EDI) are already investing in electric vehicles. The school purchased a Model X to be part of its premium driving fleet in 2018, and since then, the vehicle has been received well. In a conversation with Teslarati, EDI Marketing Executive Disha Bhatia explained that the addition of electric vehicles to the school’s fleet is fully supported by the government. This is a big vote of confidence in EVs, since Dubai mandates all drivers to attend a formal driving school before attempting a driving test.

“It becomes important for them to also know that if tomorrow, electric cars are the future, then how would driving be any different than that of regular cars? So when (the students) learn on Teslas, they would understand the differences between a normal car versus an electric car. However, they also need to understand that driving is the same. They still need to focus on the same points… the same (focus on safety)… We’ve received great responses from a lot of our customers who are very interested to drive in a Tesla, and they’re very happy to get their licenses,” she said.

So what exactly happened in the case of the Model 3 owner? It would be very difficult to determine exactly what caused the examiners to fail the Tesla owner, though it appears that a lack of proper information is the prominent culprit. Teslas are ultimately cars, after all, and they serve the same purpose as regular vehicles. They just happen to be more advanced, and in more ways than one, safer, than traditional vehicles. With this in mind, it seems to be a bad idea to be misinformed about Teslas, especially since the vehicles are practically everywhere in the state.