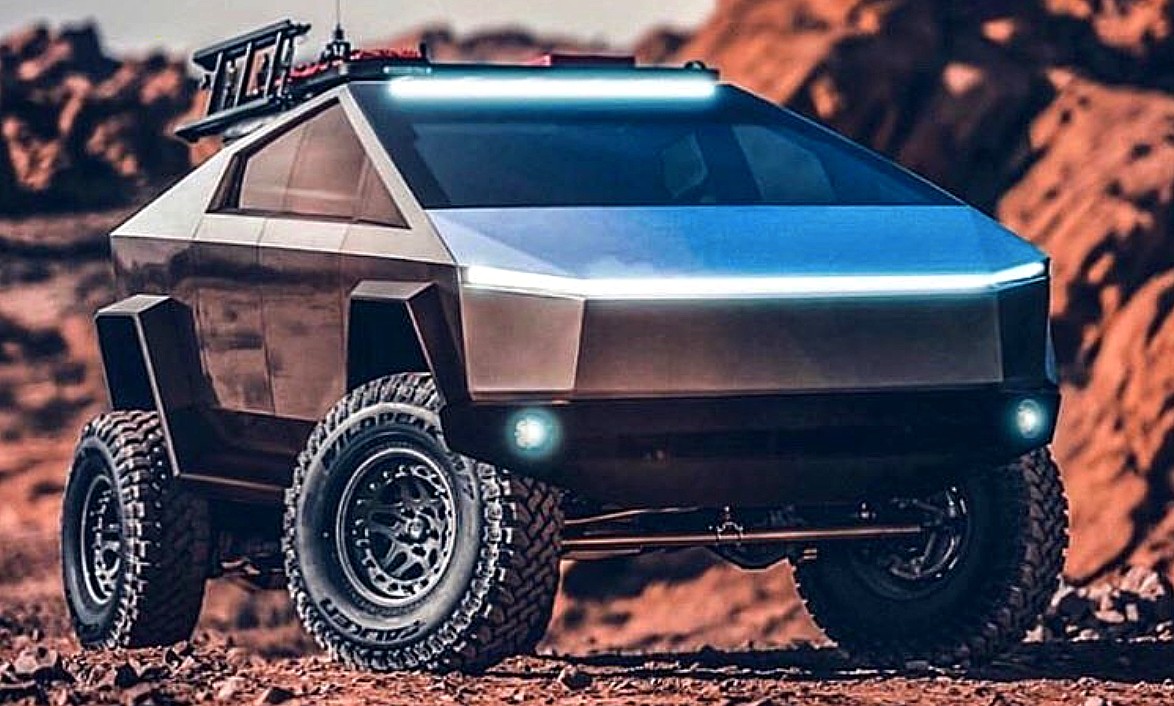 Tesla Cybertruck is keeping its massive size; now it’s an even better rival to flagship pickups and SUVs

After a significant degree of consideration, CEO Elon Musk has noted that the Tesla Cybertruck will likely be keeping its original physical size. This means that the all-electric pickup will be just as massive and daunting as the prototype that shocked the automotive industry in its unveiling late last year.

Musk’s comments came as a response to a tweet showcasing a clip from an upcoming Jay Leno’s Garage feature, which is currently being promoted by CNBC. The upcoming episode of the popular auto show will be focused on Tesla, and teasers have shown Elon Musk and Jay Leno discussing the Cybertruck, the Roadster, the S3XY line, and even the Semi.

In his recent update, Musk stated that he recently reviewed the design of the Cybertruck with Tesla Design Chief Franz von Holzhausen, and they figured that even a 3% reduction in size to the all-electric pickup would make the vehicle too small. With this in mind, the production version of the Cybertruck will likely be identical in size to the massive prototype that was featured in the vehicle’s unveiling late last year.

Musk did note that this would likely mean that Tesla will be releasing a smaller truck sometime in the near future. This could actually be strategic for Tesla considering that veteran truck makers such as Ford have both full-sized trucks such as the F-150 and smaller pickups like the Ranger. The Cybertruck will be a rival to the F-150, but Tesla has no response to the Ranger, and the market for midsize trucks is significant as well.

While the Cybertruck’s massive size will likely result in the vehicle being too large for some American garages, Musk’s decision to keep the pickup’s dimensions identical to the prototype would mean that it will be comparable to some of America’s most popular pickups and SUVs. This is because the American market is quite fond of large vehicles, and this has resulted in flagship trucks and SUVs getting bigger by the year.

A survey from USA Today has determined that the drive for bigger vehicles in the United States has started bumping into the physical limitations of American homes and garages. Jeff Dyke, president of Sonic Automotive, one of the largest automotive dealership networks in the US, described this trend in a statement to the publication.

“The next-generation Suburban is gonna be so big – my wife drives one – you’re not going to be able to park it in the garage. The Tahoe is the new Suburban, and the new Suburban is a school bus.” Dyke said. Despite this, Americans want large vehicles, as indicated by the demand for full-sized trucks and SUVs. “Gas prices are low, they’re reasonable, and the country’s in love with SUVs,” he added.

These challenges associated with large vehicle sizes do not appear to be adversely affecting the pickup and SUV market, or at least not as much. Both segments remain popular, and they do not seem to be poised to drop anytime, either. Instead of stopping the purchase of these vehicles, consumers in the United States have responded to this trend by simply parking their trucks and SUVs on their driveways.

This presents some challenges, of course, since exposing vehicles to the elements means that their paint may get damaged, among other things. Vehicles left outside are prone to getting punished by the elements, which is bad news if they are exposed to things like hail. As it happens, the Cybertruck actually addresses these factors, as the vehicle appears to be designed to be parked outside.

In previous tweets, Musk has stated that the vehicle will have an option where its motorized tonneau cover is fitted with solar panels, allowing the Cybertruck to charge its batteries while it’s parked outside. The all-electric pickup is also unpainted, which means that it can take a lot of punishment without flinching. Musk even noted recently that the Cybertruck would pretty much be impervious to hail, on account of its steel body and Armor Glass.

Tesla Cybertruck is keeping its massive size; now it’s an even better rival to flagship pickups and SUVs