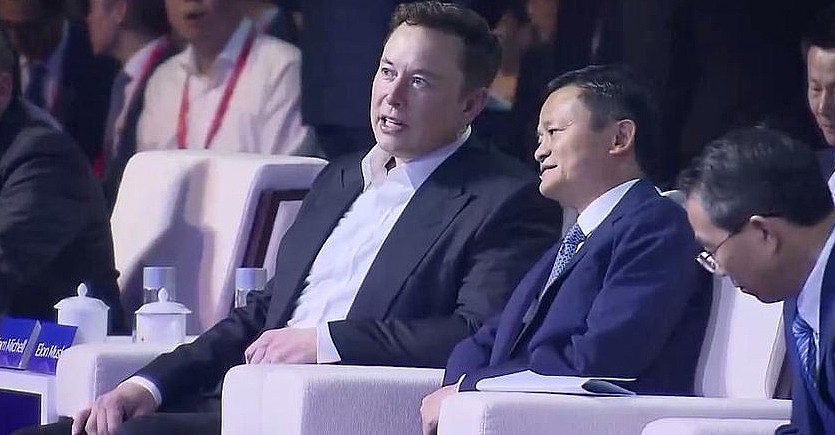 Tesla and SpaceX CEO Elon Musk and Alibaba founder and Chairman Jack Ma kicked off the 2019 World Artificial Intelligence Conference in Shanghai, China, with an informal debate about AI and its implications to humanity. Throughout their conversation, Musk and Ma touched on several topics, from jobs, the need for educational reform, moving to Mars, and how humans’ way of life can improve in the future.

The two billionaires have vastly differing points of view concerning artificial intelligence. While Musk is cautious about AI considering the dangers it may pose to humanity, Ma is far more optimistic. “I don’t think AI is a threat,” Ma said, responding to the Tesla CEO’s introductory points. Explaining further, the Alibaba founder noted that people are “street smart,” and thus, humanity will be fine even when AI evolves. Musk, for his part, doubled down on his point, arguing that AI’s rate of improvement is notable, and there will come a time when computers will outpace humans’ natural ability to understand it.

Musk noted that humans have an opportunity today because this is the first time in history that it’s “possible to extend life beyond Earth.” He added that the window for this could either be open for a long or short time. Thus, it is in humanity’s best interest to secure its multi-planetary opportunities as quickly as possible.

Ma, for his part, argued that he has no interest in multi-planetary initiatives. “I’m not a fan of going to Mars,” he noted. Instead, Ma stated that it’s more pertinent for humans to try and preserve Earth. The Alibaba chairman nevertheless stated that the world needs innovators like Elon Musk, in as much as it needs people who are willing to do what needs to be done to save the planet. “We need heroes like you (who want to go to Mars), but we need heroes like us (who will fix Earth),” Ma said.

Musk explained that preserving Earth is a notable part of Tesla’s mission, from transitioning the transportation sector towards sustainability to fostering energy independence through solar power and batteries. Responding to Ma’s statements about using resources to focus on solving Earth’s problems, Musk noted that it will only take a fraction of the world’s GDP to make humans multi-planetary, comparable or even less than what people spend on something like makeup annually. “Spending resources on making life multi-planetary would be enough with just 1% of the earth’s GDP,” Musk noted.

“Why do we need that many jobs anyway?” Ma said, explaining that humans have been fearing that tech will take jobs away for over a hundred years, and yet, jobs have increased. Ma believes that with AI’s help, humans can eventually reach a point where the average workweek is only 3 days per week, and the average workday is only 4 hours a day. This, according to Ma, opens the opportunity for humans to enjoy life more, and live even longer. “We need to be ready to enter the era where everyone will get to live 120 years,” he said.

Musk, for his part, stated that the advent of AI will likely make most jobs pointless. Considering AI’s evolution, Musk noted that the time will come when computers could eventually make their own software. With this in mind, it would be best for people to embrace areas such as engineering and fields of study that deal with human relations, as these will still be pertinent even in the artificial intelligence age. The Tesla CEO added that this is the reason behind Neuralink and its brain-machine interface, as it will prevent humans from being left behind.

The need for education reform

The Alibaba founder admitted that he is worried about the current educational system, which is still largely designed for the industrial period. Ma argues that today, there is a need to foster more creative and constructive education, which would allow humans to live a happier life. “I want to spend more time training kids on painting, singing, dancing, these creative things that make people live like humans,” he said. Ma added that people have heart, and that is where wisdom comes from. With this in mind, it is best for education to focus on training this aspect of the human being.

The Tesla CEO agreed that creative education is needed, particularly as today’s school system is “low bandwidth and extremely slow.” Musk noted that solutions such as Neuralink’s neural lace could be a difference-maker in this sense, as it would allow people to upload skills and learn them quickly, in a manner that is not too far from the concepts depicted in the sci-fi franchise The Matrix.

The dangers of AI

While the two disruptors agreed that there is a need for educational reform, Musk and Ma disagreed most about the potential risks of AI. Ma argued that compared to humans, computers are just a toy, adding that the best resource in the world is the human brain. “It’s impossible that humans could be controlled by machines. They’re machines that are invented by humans,” Ma said.

Musk noted that he very much disagrees with Ma’s stance. Arguing his point, the Tesla CEO stated that humans are capable of creating things that are superior to people. Humans are not the last step in evolution, Musk said, and people must be wary of thinking that they are smarter than they really are. “The most important mistake smart people make is that they think they’re smart. Computers are already smarter than people. We just keep moving the goalposts,” he stated.

Responding to Musk’s argument, Ma noted that the metrics humans use to benchmark themselves against AI (such as world champions in Chess playing against artificial intelligence) do not make sense, as games like Go are designed for human minds. “Why should humans play against computers? It’s stupid to compete with computers,” Ma quipped, adding that while computers can be clever, humans are smarter and wiser.

The future of humanity

Musk believes that one of the world’s greatest threats lie in its declining birthrate. “The world’s biggest issue in 20 years is population collapse,” he said, adding that this could be a big issue considering that humans generally have a “20-year boot sequence.” Ma agreed, stating that even China’s population, which currently stands at 1.4 billion people, sounds a lot today, but if one factors in the country’s declining birthrate, the country will see a completely different landscape in 20 years.

Ma ultimately believes that pursuing AI is wise to make people’s lives better. The Alibaba founded added that artificial intelligence can always do a better job when logic is involved, but when logic is not involved, humans will always be better. To thrive in the future, Ma stated that humans need not just IQ, but emotional intelligence, and (love) intelligence as well. Musk nodded, stating “I agree with him. Love is the answer.”

Watch Elon Musk and Jack Ma’s informal AI debate in the video below.