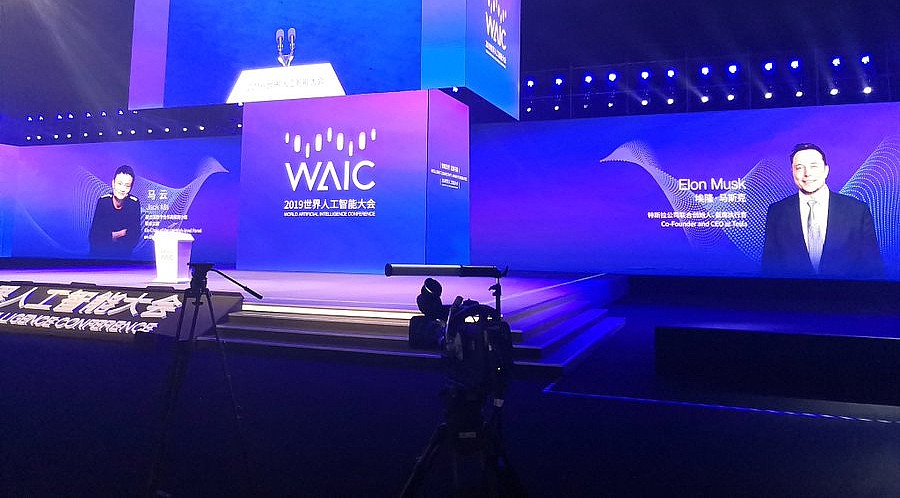 The 2019 World Artificial Intelligence Conference in Shanghai, is set to kick off on Thursday, August 29, and based on images shared by Tesla enthusiasts in China, the 2019 WAIC’s venue is already getting prepared for Elon Musk, who is expected to kick off the event alongside Alibaba founder and Chairman Jack Ma.

Elon Musk and Jack Ma are expected to hold what is currently being dubbed as a “free-wheeling debate” about artificial intelligence. The session between the two entrepreneurs was initially related by an Alibaba spokesperson on Monday, who noted that Musk and Ma will be holding their conversation on the WAIC’s opening day. Tesla confirmed Musk’s attendance on Tuesday.

In a statement to Bloomberg, Zhang Hongtao, one of the event’s organizers, stated that Musk’s attendance in the conference was secured “quite early.” Zhao added that Musk is expected to share updates on the future development of Tesla’s investment in Shanghai, which is headlined by the buildout of the expansive Gigafactory 3 complex in the Lingang area.

The conversation between Elon Musk and Jack Ma will likely be insightful, especially considering that the entrepreneurs are two of the most driven disruptors in the industry today. Both men have built their businesses through persistence and hard work, and both have experienced notable failures in the past. Musk’s initial struggles with SpaceX and Tesla’s early days, as well as the multiple rejections Ma experienced before he became an e-commerce titan, are notable examples of these.

Apart from speaking at the AI conference and engaging the Alibaba founder in a friendly debate, reports from Chinese social media have also suggested that Musk will potentially unveil the first Made-in-China Tesla Model 3 at the upcoming event. Images and footage of partially assembled Model 3 inside Gigafactory 3 were recently leaked online, and not long after that, reports emerged stating that a vehicle produced in the Shanghai-based site will be showcased at the AI conference.

Elon Musk’s trip to China will not only involve his attendance at the 2019 WAIC and a potential unveiling of Tesla’s first locally-produced Model 3. Musk has also announced on Twitter that he will be establishing The Boring Company’s China unit on this trip. Reports have also suggested that Musk will be personally visiting the Gigafactory 3 complex, which continues to be built at an incredibly rapid pace.