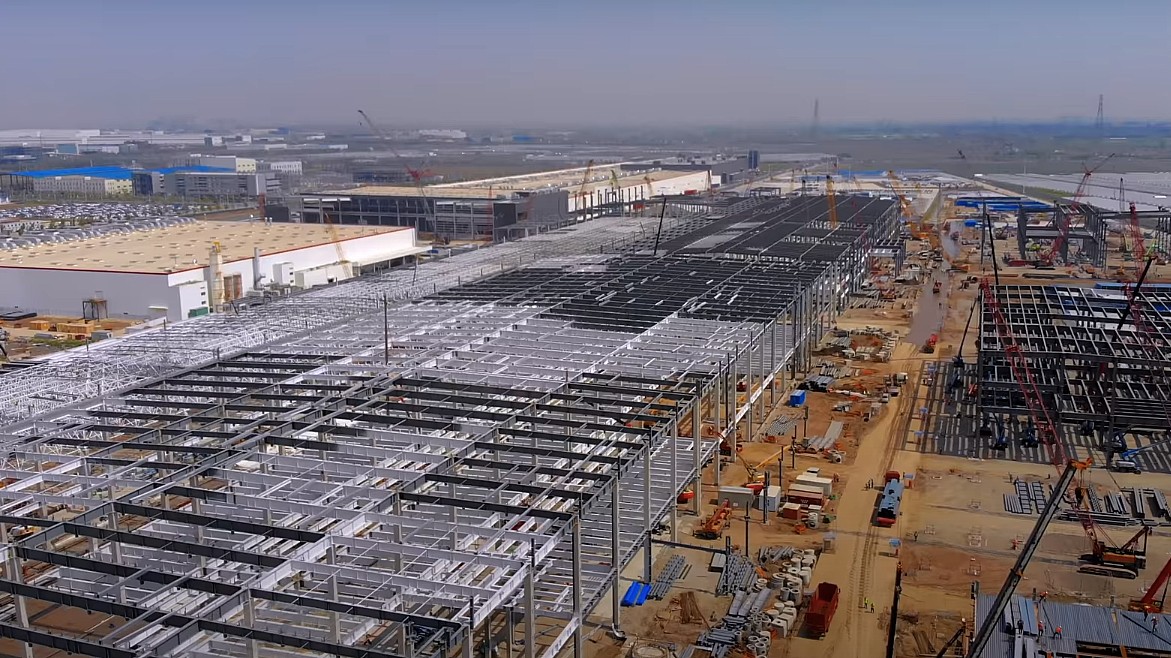 Recent flyovers of the Gigafactory Shanghai complex indicate that work on the Model Y factory is progressing at an incredibly quick manner. Built with a speed that seems to rival even that of the site’s Model 3 factory last year, the Model Y facility has evolved from a simple field with a few posts to a framework of a massive building in just a couple of months.

As could be seen in recent drone footage from Tesla enthusiast Jason Yang, Gigafactory Shanghai’s Phase 2A area, which has been confirmed as the Model Y factory in Tesla’s Q1 2020 Update Letter, is coming to form. Roof trusses have been laid on most of the building, and its metal framework seems pretty much completed. Considering the speed of the buildout so far, it would not be surprising if Tesla China starts paving the roof and floors of the facility within the coming month.

If one were to look at the current state of the Gigafactory Shanghai complex, one would see that it matches the progress of the Phase 1 building in late April 2019. Gigafactory Shanghai’s Model 3 facility was built in record time, and following a groundbreaking ceremony in January 2019, the building’s metal framework and roof trusses were nearly done by late April.

Following this, roof and floor paving were started, and by the end of May, the Model 3 facility’s factory shell was practically completed. Based on the current progress of the Model Y factory, it appears that Tesla China and its construction partners are progressing just as fast, if not faster, than the buildout of the Model 3 facility. This could bode very well for the production of the Made-in-China Model Y and its eventual release to the local market.

After the completion of Phase 1’s factory shell in late May 2019, it only took less than four months before trial assembly of the Model 3 began in the Phase 1 building. The first images of Made-in-China Model 3 trial units being assembled in Gigafactory Shanghai emerged in September 2019, and by October, photos of first production vehicles were being shared online. By the end of 2019, first deliveries of the locally-made Model 3 to Tesla China employees was conducted.

If the construction in the Phase 2A area matches the speed of the Model 3 factory, it would not be surprising if the Model Y facility starts rolling out trial units by the start of the fourth quarter. If Tesla China could accelerate its pace even further, then the idea of initial Model Y deliveries happening before the end of the year actually becomes quite feasible. The Model Y shares 75% of the Model 3’s parts, after all, and it is designed to be built with automation in mind. As it turns out, Tesla’s China team happens to excel in projects that are quick and efficient.

Watch a recent drone flyover of the Gigafactory Shanghai site in the video below.