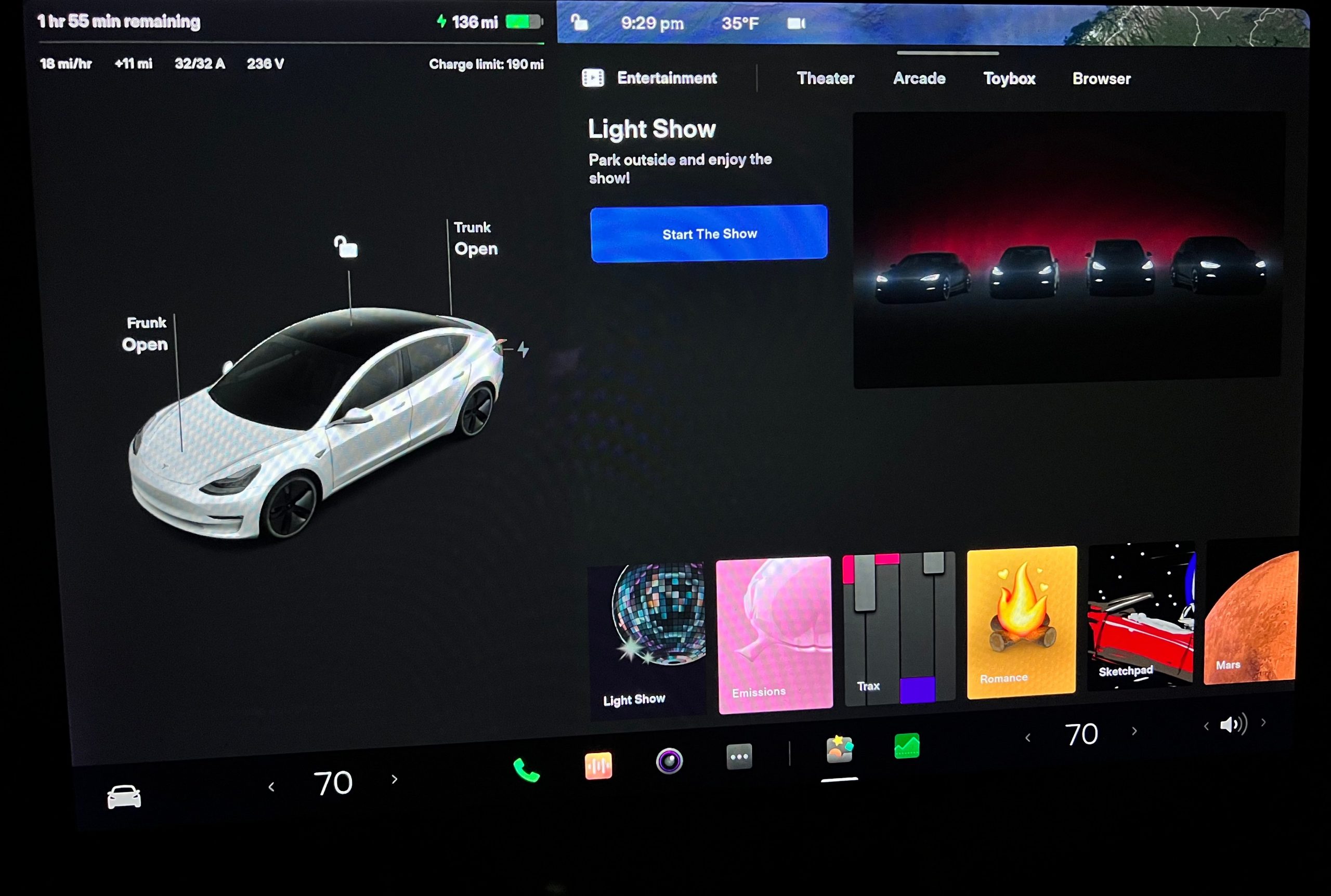 Just a few days before Christmas, Tesla is kicking off the holidays with a bang. This year’s Holiday Update includes a few fun surprises for Tesla owners, including new games and a few other fun features.

Teslascope, a Tesla software update tracker service, has shared that the 2021.44.25 update is being rolled out to employees for now, with a wide release following in the lead up to Christmas. Reports shared online suggest that the update works very smoothly on vehicles like the Model 3 and Model Y, however.

First off is the Light Show, which enables Tesla vehicles to dance to a choreographed light show any time of the year. The feature was a signature trick of the Model X, so it is pretty interesting that Tesla is now rolling it out to the other vehicles in its lineup. The Light Show feature can be accessed through the Toybox.

In its Holiday Update, Tesla also introduced the Customizable App Launcher, allowing owners to customize the menu bar in their infotainment systems. This should go perfectly hand-in-hand with the Model 3 and Model Y’s update UI, which now matches the interface of the Model S Plaid and new Model X that were rolled out this year.

“Drag and drop your favorite apps to any position along the bottom menu bar for easy access. To customize your menu bar, hold any icon and then drag to reorder. To adjust climate controls such as heated seats and defrost, tap on the temperature or swipe up from the bottom of the screen,” the update’s Release Notes read.

As with any update, Tesla improved a few key features, including vehicle controls, blind spot monitoring, and Waypoints.

Simplified Controls makes it easier for Tesla owners to focus on navigation, media, and the most common primary controls. The improvement should make accessing features in the infotainment system easier, so driving or operating a Tesla may be more convenient and perhaps even safer.

The Blind Spot Camera feature is probably one of the best improvements in the Tesla Holiday update, as it provides vehicles with a video feed showing their blind spot when a turn signal is activated. “You can now automatically see a live camera view of your blind spot whenever you activate the turn signal,” the Release Notes for the feature read.

Tesla also made trips easier with Edit Waypoints. The navigation improvements will probably be quite useful to families taking trips this holiday. The feature allows drivers to reorder or add multiple destinations to their route. Edit Waypoints will update the arrival times for each change on the route. “To add a stop, or edit a trip, initiate a navigation route, and tap the more options button not he turn list,” wrote Tesla on the Edit Waypoints Release Notes.

Being a Holiday Update, 2021.44.25 is rife with a number of improvements for Tesla Theater and Tesla Arcade. Access to a popular social media platform has also been enabled.

First up is Sonic the Hedgehog, which Elon Musk himself announced on Twitter recently. Multiplayer support for The Battle for Polytopia has also been enabled, which should make in-car gaming sessions even more fun.

Sudoku has also been added to the Tesla Arcade, complete with a mode that includes a smart hint system for beginners. Also, the popular social media app TikTok is now accessible to Teslas.

Update 2021.44.25 is not all fun and games. Tesla included some Cold Weather Improvements to its Holiday Update, too. Preconditioning the cabin from the Tesla Mobile App when the battery is at a lower state of charge is now enabled. First row seat heaters can now automatically regulate seat temperatures based on the cabin’s environment and control set temperature.

Managing dashcam clips is also easier, as videos can now be deleted directly from the infotainment system. Themes for the infotainment system have been rolled out, too. For instance, Dark Mode is now available for Tesla displays. Dark Mode may be a simple update, but it could make vehicles safer, as a darker display reduced the chance of screen glare for the driver.