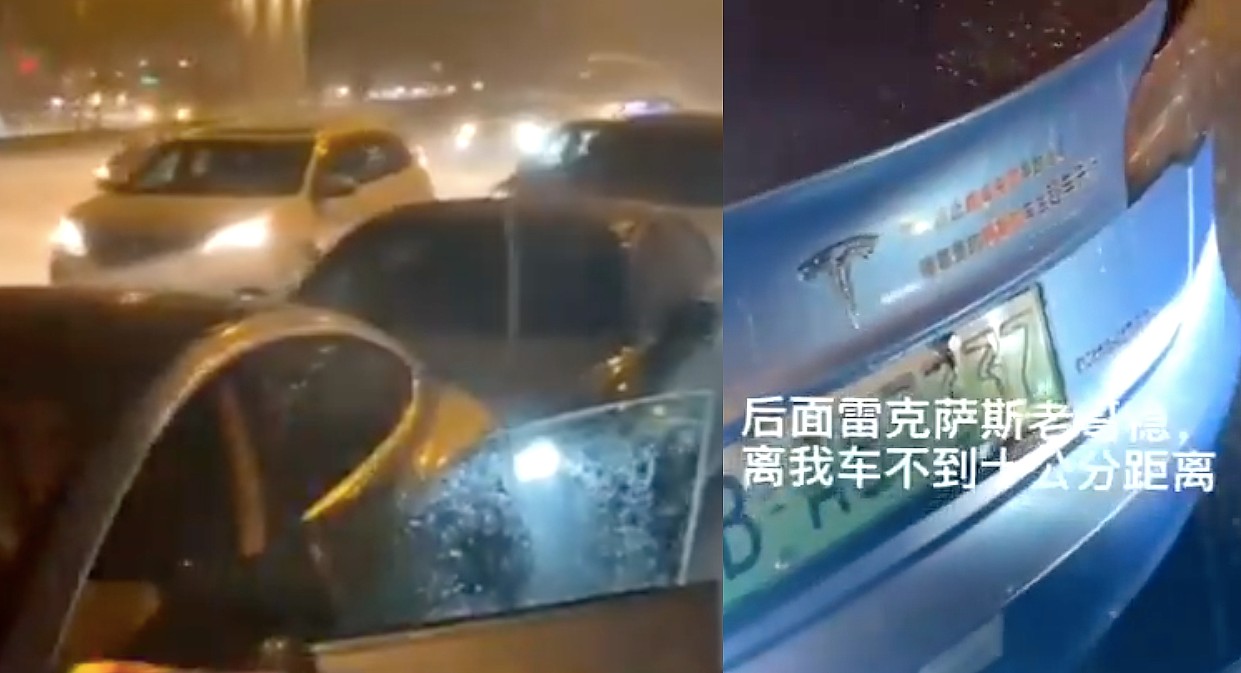 It may be a bit challenging for Tesla skeptics to maintain the “brake failure” narrative in China, as the company’s all-electric vehicles are proving their critics wrong in real-life incidents. One of these, which has garnered some traction in China’s social media platforms, featured a Tesla that found itself in the middle of a multi-vehicle collision in heavy rain. Despite the slippery roads, the Tesla’s brakes proved strong enough, effectively saving the vehicle from any front-end damage.

The video was taken during a particularly rainy night in Shenzhen, China. On the road’s leftmost lane, four vehicles ended up in a pileup. A Tesla Model 3 in the same lane would have been the fifth vehicle in the collision if it had not been for its brakes, which stopped the all-electric sedan in time. As luck would have it, the Model 3 escaped some rear damage since a Lexus behind it was able to stop as well, albeit just a hair away from the Model 3’s rear bumper.

BREAKING: another crash involving 8 vehicles just happened today in Shenzhen, China. One familiar vehicle was unharmed. You know which one it is. Owner said braking was applied by the vehicle itself while AP was on before he pressed brake pedal further down. @elonmusk @teslacn pic.twitter.com/6LETuPkxGZ

The owner of the Model 3 had some interesting insights from the incident. According to the Tesla owner, his Model 3 had Autopilot engaged when the multi-car pileup happened. The EV owner also noted that the brakes were already being applied by the vehicle before his foot was actually pressing on the brake pedal itself. This is quite an interesting remark, as it highlights the strength of Tesla’s brakes and the safety features of Autopilot.

This is not the first time that a Tesla has performed exceptionally well in a multi-vehicle crash. Earlier videos from China had depicted a Model Y stopping well behind a multi-car collision, at least before it was rear-ended by the vehicle directly behind it. Some of these incidents have gone viral in China, and they have helped curb some of the recent “brake failure” rumors surrounding the company and its vehicles.

Tesla’s “brake failure” rumors were kindled recently when a disgruntled Model 3 owner, whose vehicle had previously crashed, held a bold protest at the Shanghai Auto Show while claiming that her car’s brakes had failed. Tesla China issued statements, formed special customer teams, and released data from the crash to prove that the Model 3’s brakes have not failed at all. However, the damage has been done, and some Tesla drivers have reported experiencing some unwanted attention and prejudice due to their vehicles’ brakes.

Hopefully, these real-world examples of Tesla’s safety and performance on the road would eventually shift some of the public’s perception surrounding the company. After all, if Teslas on the road are proving their safety and using their brakes to do so, it would be pretty challenging to insist that the vehicles have brake issues.