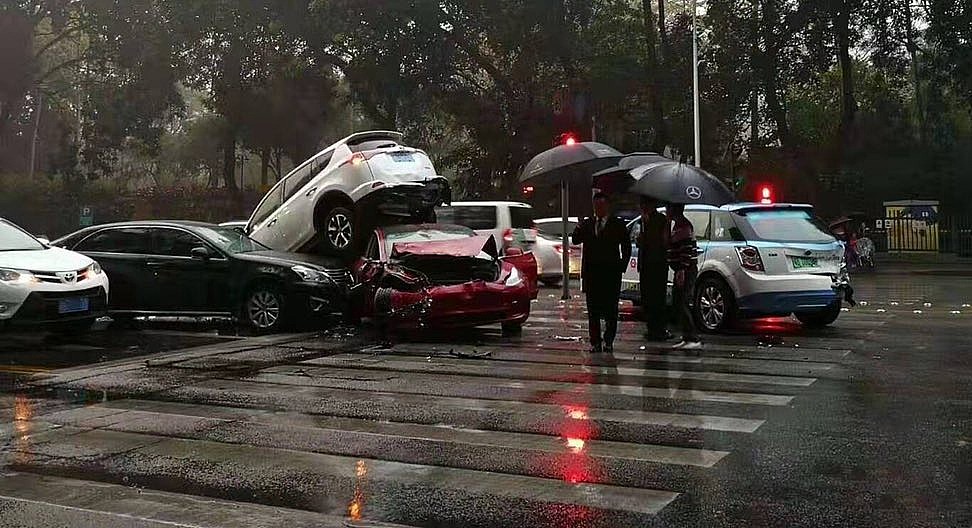 There are two things that buyers can be certain of when they purchase a Tesla. One, they are extremely quick, with even the most conservatively-specced vehicles in the company’s lineup being snappy and nimble. Two, they are all engineered to be as safe as possible. This second point became evident in a recent multi-car pileup in Guangdong, China, which involved a Model 3.

Footage and images from the incident were shared on Twitter by Tesla enthusiast @Tesla__Mania. Based on pictures from the accident, the multi-car pileup appeared to have happened at an intersection, with the Model 3 being hit on the side by a black sedan. During the pileup, a crossover SUV also ended up on the Model 3’s glass roof. At least another vehicle was involved in the accident as well.

Despite the frightening scene of the crash, the Model 3’s driver reportedly escaped the ordeal without any serious injuries. According to the Tesla enthusiast, the driver of the Model 3 seemed to have walked out of the vehicle unharmed. A look at the severe damage to the Model shows just how fortunate the electric car’s driver was.

A video showing the aftermath of the crash reveals that the Model 3’s spacious cabin was intact despite the severe accident. Its glass roof also seemed to be fully intact, despite supporting part of the weight of a crossover SUV. Overall, the entire incident showcases just how well-designed Tesla’s vehicles are, and how optimized they are for safety.

The feat of strength exhibited by the Model 3 in the recent multi-car pileup in China Guangdong, China is proof that the findings of the IIHS regarding the vehicle’s all-glass roof were no fluke. The IIHS has dubbed the Model 3 as a Top Safety Pick+ vehicle, the highest achievement awarded by the Institute. During its tests, the IIHS took particular note of the Model 3’s all-glass roof, which exhibited impressive strength in its tests. Tesla outlined these findings in a blog post about the Model 3’s IIHS safety

“The Institute’s results also demonstrate the exceptional strength of Model 3’s all-glass roof, which is supported by a very strong metal body structure and helps protect occupants in roll-over crashes. During testing, the car’s roof was able to successfully resist more than 20,000 pounds of force – that’s more than if we placed five Model 3s on top of the car’s roof at once. And, the roof earned a higher strength-to-weight ratio score than any other fully electric vehicle that IIHS has ever tested,” Tesla wrote.

Looking at the results of the recent multi-car pileup, it appears that the Model 3’s glass roof can definitely take some punishment before giving way. It does not only make the Model 3’s interior airy and futuristic; it also makes the vehicle very, very safe.