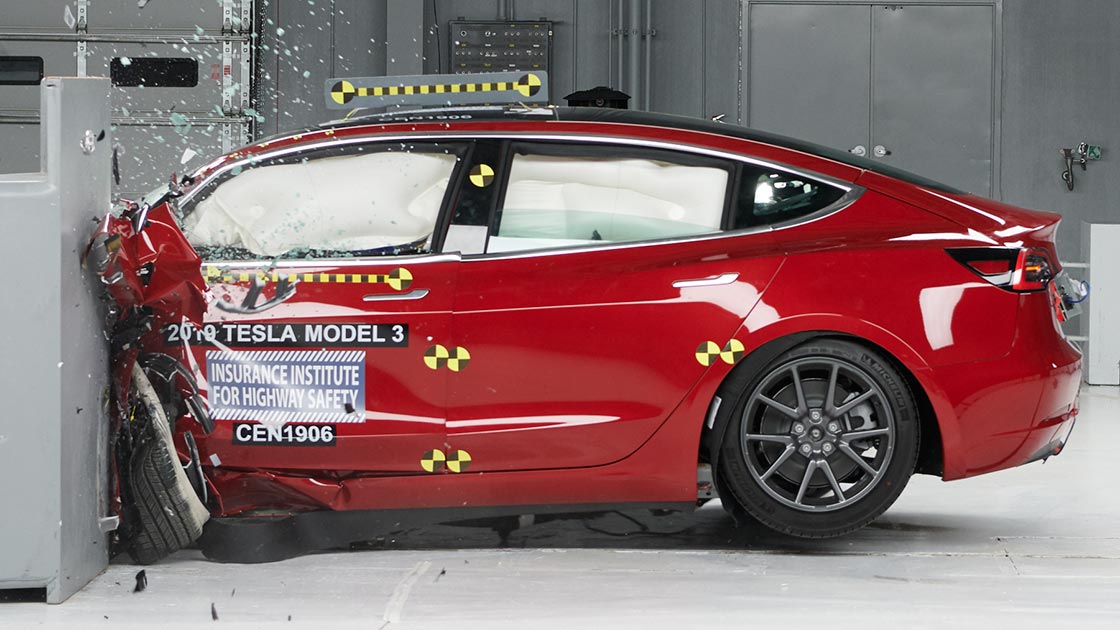 The Insurance Institute for Highway Safety (IIHS) has released the results of its crash tests for the Tesla Model 3, and just like other safety agencies in the US and abroad, the organization has granted the all-electric sedan its highest rating available. In a recent announcement, the IIHS has revealed that the Tesla Model 3 qualifies for its Top Safety Pick+ award.

The IIHS notes that to earn the Top Safety Pick+ award, a vehicle must get good ratings in the driver-side small overlap front, moderate overlap front, side, roof strength, and head restraint tests. Good ratings are also required in the passenger-side small overlap test and the headlight evaluation, the latter proving to be a tricky metric that is rarely aced by carmakers.

The Model 3 earned good ratings across the board for crashworthiness, with the vehicle’s front crash prevention system getting a superior rating after successfully avoiding collisions in both the 12 mph and 25 mph track tests. The Model 3’s strong frame also allowed the vehicle to perform well in challenging tests such as the driver-side small overlap front test. Additionally, the Model 3’s headlights received a good rating for being bright enough without causing glare to other drivers.

With its results, the Tesla Model 3 joins the all-electric Audi e-tron and the hydrogen-powered Hyundai Nexo as the IIHS’ Top Safety Pick+ vehicles for 2019. Speaking about these results, IIHS Chief Research Officer David Zuby remarked that the stellar safety performance of these vehicles proves that cars with alternative powertrains do not compromise in terms of safety. “Vehicles with alternative powertrains have come into their own. There’s no need to trade away safety for a lower carbon footprint when choosing a vehicle,” he said.

In a blog post, Tesla explained that the Model 3’s Top Safety Pick+ rating from the IIHS is due to the vehicle’s all-electric structural and powertrain design, which gives the car a low center of gravity that reduces rollover risk while protecting occupants in the event of a crash. Of course, the absence of an engine results in a generous crumple zone in front of the Model 3, which absorbs energy more effectively during a collision. The Model 3’s glass roof also proved very strong, resisting more than 20,000 pounds of force.

Watch the IIHS’s featurette on the Tesla Model 3’s stellar safety results in the video below.

Read Tesla’s blog post about the IIHS’ Top Safety Pick+ award for the Model 3 below.

We engineer our cars to be the best in the world – in every category. Model 3, our most affordable car yet, is no exception. From the start, we designed it to be among the safest cars ever built, with the goal of getting as many Model 3s on the road as possible to further our mission.

Model 3 has already earned a 5-star safety rating in every category and sub-category from safety authorities on three continents (North America, Europe and Australia), and it has received top marks around the world for its advanced safety assistance features like Automatic Emergency Braking.

Now, in new tests from the Insurance Institute for Highway Safety (IIHS), Model 3 has been named a 2019 IIHS TOP SAFETY PICK+ vehicle, the highest achievement awarded by the Institute. To evaluate whether Model 3 met the criteria for this top rating, IIHS tested the car’s crashworthiness, occupant protection, crash avoidance, and headlight systems. Model 3 earned top marks in all eight tests, including a superior rating in front crash prevention, which evaluates a car’s Automatic Emergency Braking system, and the highest possible rating in IIHS’ headlight assessment.

Here’s a look at some of the ways we made this happen:

Part of what makes Model 3 so safe is its all-electric powertrain design, which gives the car a low center of gravity that reduces roll-over risk, as well as its rigid aluminum and steel passenger cabin that provides exceptional strength to equally protect drivers and passengers. Additionally, Model 3’s lack of an engine is replaced by a large crumple zone that helps it absorb energy more effectively than a gas car would, dissipating force away from the passenger cabin. This crumple zone contributed to Model 3’s top rating in IIHS’ frontal crash protection tests.

The Institute’s results also demonstrate the exceptional strength of Model 3’s all-glass roof, which is supported by a very strong metal body structure and helps protect occupants in roll-over crashes. During testing, the car’s roof was able to successfully resist more than 20,000 pounds of force – that’s more than if we placed five Model 3s on top of the car’s roof at once. And, the roof earned a higher strength-to-weight ratio score than any other fully electric vehicle that IIHS has ever tested.

In addition, Model 3’s safety restraint system also earned high marks in IIHS’ evaluation. This was due in part to Model 3’s seats, which are designed and manufactured in-house at our dedicated seat factory in Fremont, as well as our thick curtain airbag and uniquely shaped front passenger airbag, which help protect a passenger’s head from the car’s A-pillar and center screen.

In terms of crash mitigation, good headlights can help prevent nighttime crashes, which is why Model 3 comes standard with automatic high and low beam headlights that earned top marks in IIHS testing. And, when it comes to crash prevention, Model 3 earned a superior rating thanks to our Automatic Emergency Braking system, which successfully avoided collisions at both 12 miles per hour and 25 miles per hour.

The safety of our customers is what matters most, which is why our active safety features and passive safety equipment come standard on all of our cars. We’re also committed to making our cars even safer over time via over-the-air updates, helping us ensure that all Tesla drivers have access to the best safety features available for their cars.