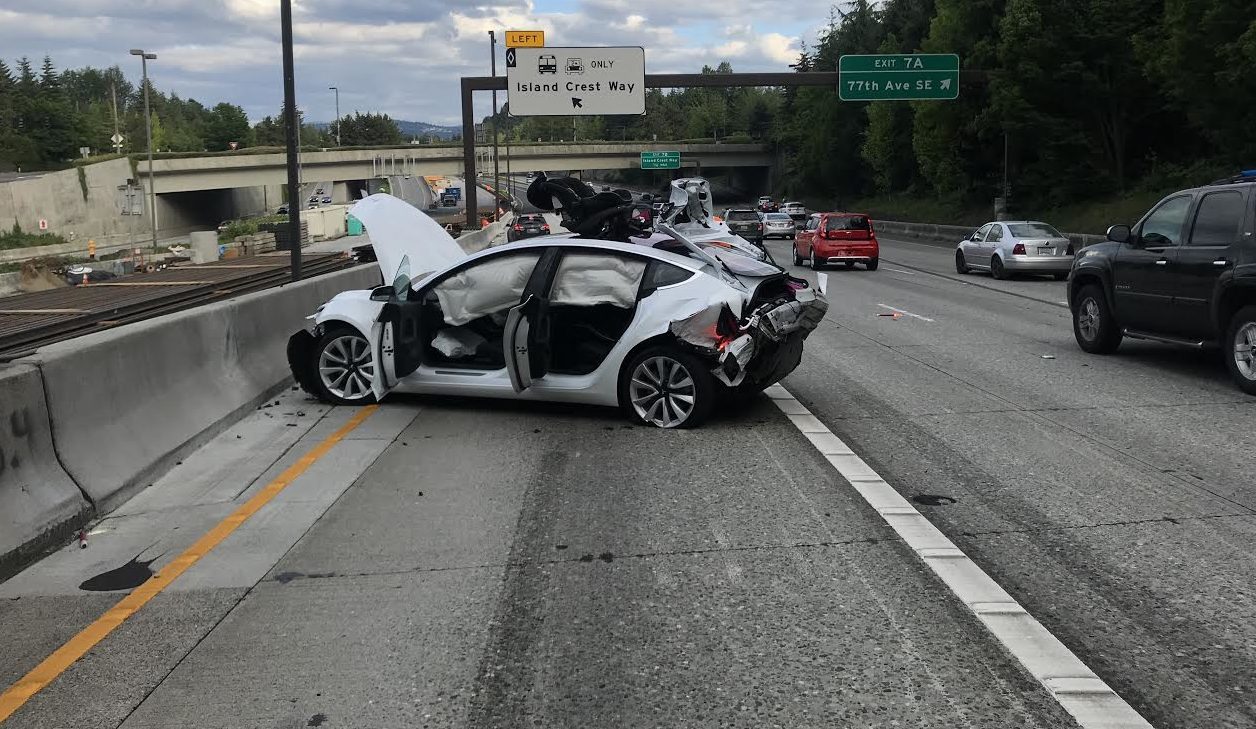 A family of four is counting their blessings after their Tesla Model 3 protected them from serious injury after their all-electric vehicle was rear-ended at high-speed in a major collision on the I-90 tunnel in Seattle, Washington on Monday, May 28.

An eyewitness posted their account of the incident on the Seattle Cars & Coffee Facebook group, writing that a Camaro SS and a BMW M4 were racing when the Camaro SS, unable to slow down in time, smashed directly into the rear of the Model 3 and sent the vehicle spinning into a concrete highway divider.

“I was going 65, so that vehicle must have been going significantly faster. From there I lose control of the car, and the car spins out of control, hitting the freeway divider wall all the way on the other side of the freeway 4 lanes across, and then bouncing back all the way back to the other side of the freeway and hitting that wall before coming to a stop,” recalls Antari who shared their story on the Tesla Motors Club forum. “Thankfully the model 3 performed miraculously, crumple zones compressed, airbags deployed, no fire after the accident, and no one in my family seems to be seriously injured,” adds the driver.

Similar to Tesla’s flagship Model S and Model X fleet, Model 3’s all-electric design is void of a front-mounted engine and rear-mounted gas tank, as can be found on traditional gasoline vehicles, and acts as an extra large crumple zone that absorbs energy during high-speed collisions for added safety. In addition to Tesla’s use of ultra-high-strength steel and aluminum for Model 3’s body structure, its floor-mounted battery pack provides structural rigidity to an already reinforced vehicle.

The Model 3 was recently given a “Superior” front crash avoidance rating by the Insurance Institute for Highway Safety and praised for its Forward Collision Warning and auto brake system. In 2017, Tesla shared a side-by-side video that showed impact testing of a Volvo S60 and a Model 3. Although the S60 received a 5-star safety rating in all categories, the video depicts Model 3 outperforming the Volvo in the safety test.

This is not the first time a Model 3 driver walked away from a serious accident. In February of this year, a Model 3 owner was involved in a 60 mph collision that crumpled the entire frontend of the vehicle. The driver escaped relatively unharmed, noting that paramedics on the scene said that people don’t usually walk away from accidents of this caliber.