Tesla Model 3 currently leads the pack in terms of having the highest parasitic battery drain, or better known as “Phantom Drain”, over Tesla’s more mature Model S and Model X.

Phantom Drain represents the amount of charge an electric vehicle loses when it is not being driven or operated by a person, similar to how smartphones lose battery power while in standby mode. In the case of Tesla vehicles, the battery discharges while the car is not being driven in order to provide power to its onboard electronics and auxiliary functions, such as the battery’s thermal management system. According to the Model 3 Owners Guide, the vehicle, on average, should discharge at a rate of around 1% per day, similar to Tesla’s quotes for the Model S and Model X’s battery drain levels.

However, looking at data collected through TezLab, a popular app among the Tesla owners community that tracks vehicle power usage, efficiency, and other statistics, Ben Sullins of the Teslanomics YouTube channel was able to see a significantly larger discharge rate from the Model 3. Ben was also able to compare the differences in vampire drain between the 3,855 Model S, 1,281 Model X, and 362 Model 3 being sampled.

Looking at the distribution of Phantom Drain between the Model S, Model 3 and Model X, it could be seen that around 60% of TezLab’s users experienced drain levels similar to Tesla’s quoted levels, which are on the 1-2% range per day. However, the differences between battery drain of the Model 3 and the Model S and X become more prominent over time. It’s worth noting that any parasitic losses as a result of TezLab connecting to the vehicle on a recurring basis may also be accounted for in the results being reported. 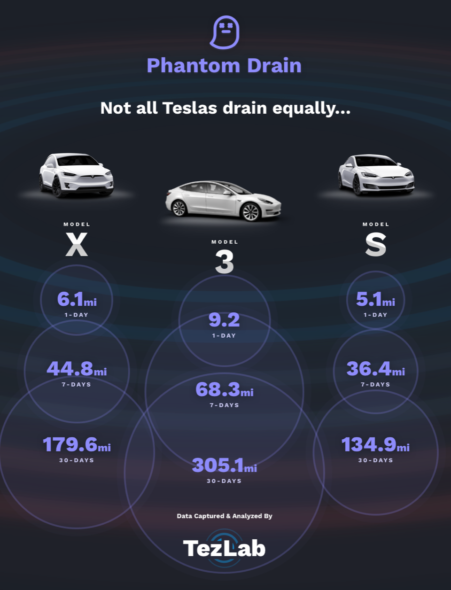 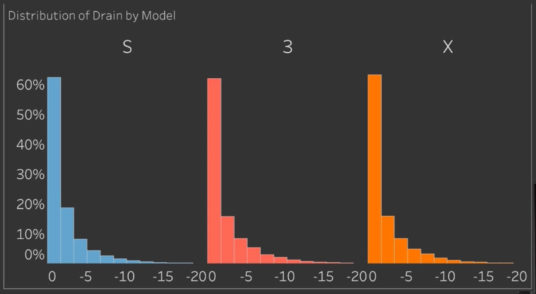 A comparison of the Phantom Drain levels of the Model 3, Model S, and Model X. [Credit: Ben Sullins/YouTube] 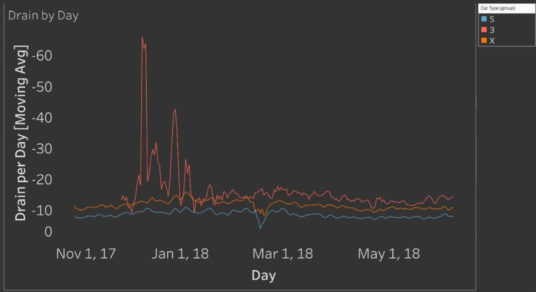 A comparison of the Phantom Drain levels of the Model 3, Model S, and Model X. [Credit: Ben Sullins/YouTube]

As noted by Ben, the Model 3’s Phantom Drain levels exhibited volatility sometime during the November 2017 to January 2018 period. Ben’s recent real-world range test using his RWD Long Range Model 3 on an LA to Las Vegas route showed an even more drastic level of Phantom Drain, with his car losing almost 20 miles of range while he and his companion ate lunch. That’s a loss of more than 6% from the Model 3’s rated 310-mile range in the span of an hour.

The drain levels of Model 3 owners using the TezLab app has started becoming more normalized, suggesting that the longer the vehicles are on the road, and as Tesla pushed firmware updates to its Model 3 fleet, the more consistent the cars’ drain levels became. Back in 2015, we covered a Model S that lost an average of 2.3% rated range per day while the vehicle was left in 16-degree Fahrenheit (-9 C) weather.

Overall, Tezlab’s data shows that the Model 3 is becoming more consistent as the maturity of the vehicle’s software is improving. Other features like its battery thermal management systems and its auxiliary functions are improving over time as well. These improvements are a trademark of Tesla, which is known as one of the only carmakers whose vehicles get better after they roll off the showrooms.

Watch Ben’s video on the Phantom Drain of the Model 3 compared to the Model S and Model X.