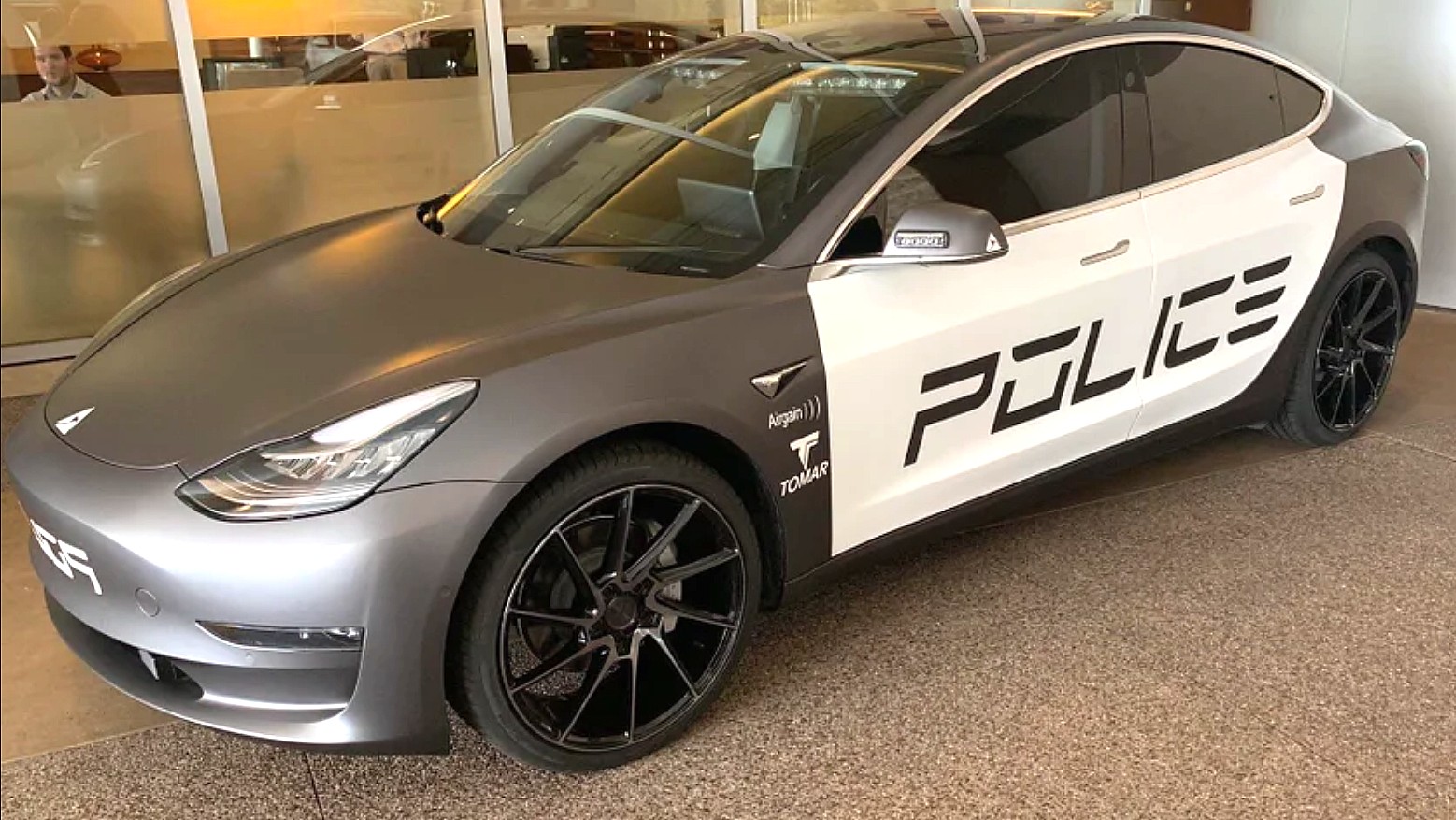 A Tesla Model 3 police car made an appearance at the Accelerate Policing conference, an event hosted by law enforcement tech company Axon. The symposium was held in Phoenix, AZ, and it featured presentations and discussions on recent innovations for the law enforcement industry.

Images taken of the Model 3 police vehicle suggest that the electric car was specifically modified by Axon itself, as well as Tomar, a manufacturer of police car equipment. Wrapped in matte silver and white and emblazoned with the words “Police” in classic Tesla font, the Model 3 looked every bit like a police cruiser. Modifications such as a lightbar inside the cabin and police lights on the side mirrors also give the electric cruiser a distinctly futuristic look.

Quite interestingly, the Model 3 police car was fitted with what appeared to be 20″ wheels, which are great for performance but not really practical for police duty. The vehicle also appears to be a non-performance Model 3, due to the absence of red brake calipers.

While Axon’s Model 3 police car appears to have been built simply as a concept, the idea of using the electric sedan for law enforcement actually makes a lot of sense. Teslas have been used by police for years, though the high costs of the Model S and Model X have largely prevented their widespread use. This issue is not present with the Model 3, which costs significantly less than the premium sedan and SUV.

The Tesla Model 3 is quick on its feet thanks to the instant torque of its electric motors, and it’s durable thanks to its rigid aluminum frame. Being an electric vehicle, the Model 3 requires far less maintenance than a comparable gas or diesel-powered police car, and its operating costs are also significantly lower. The Model 3’s 1-million-mile drive unit and long-lasting battery pack further ensure that the vehicle could remain in service for a long time.

Police vehicles are subjected to a lot of use and abuse during their years of service. According to the Fremont PD, police cruisers drive around 40-70 miles a day on average, and each vehicle is driven hard on a consistent basis. From these requirements, it appears that the Standard Plus Model 3 could be a perfect fit for police duty, since it’s affordable enough for mass deployment while including all the advantages of its more expensive siblings. Axon’s Tesla Model 3 police car definitely looks the part. Perhaps, in the future, the Model 3 could even be as ubiquitous as the Crown Vic. One can only hope.