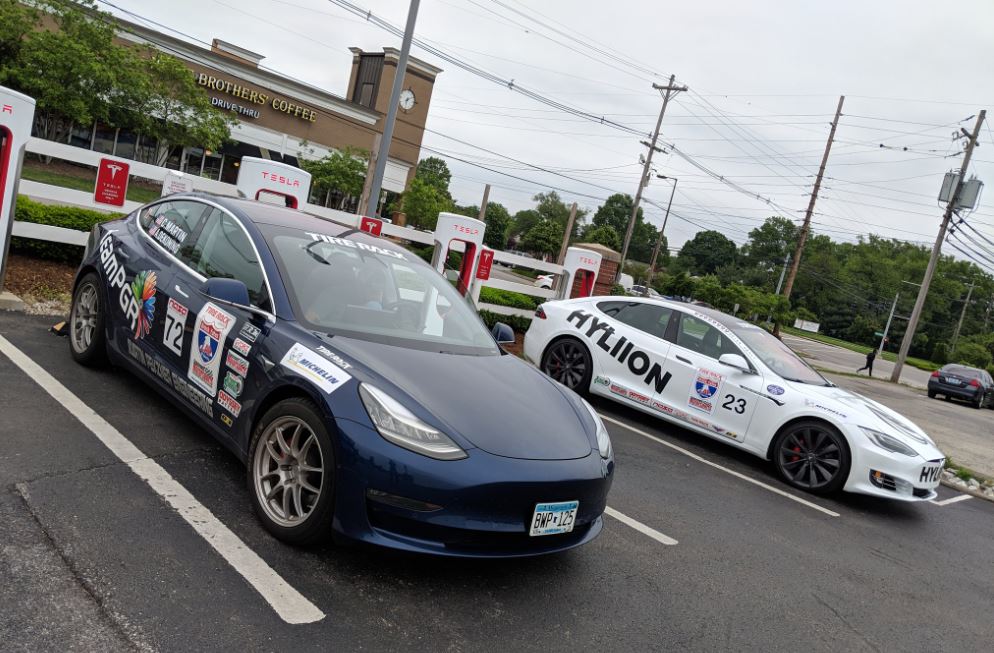 A Tesla Model 3 Performance and Model S P100D became the first all-electric vehicles to compete in the Tire Rack One Lap America road rally event, completing 18 track races at 9 locations for a total of about 3,500 miles over seven days. Thanks to Tesla’s vast Supercharger Network, the built-in performance features of their cars, and some great planning, both teams finished successfully and even took home a few wins. This year’s event took place from May 3rd through the 11th, marking its 36th year running.

Driving the Model 3 Performance was Team Panel Gap Racing (PGR) with Andrew Dekoning and Chad Martin behind the wheel. Andrew previously took part in the 2006 One Lap driving a Mazda RX-7, and as a veteran of the event and Tesla enthusiast, he knew there were advantages the Model 3 had that would make it competitive against other gas-powered vehicles.

“We had a few things that made us think this year was the year for a Tesla. #1 is that no one has ever completed the One Lap in an electric car, and we thought with the introduction of the Model 3 that it was possible,” he told us while the team was on the road. “With a performance model and Track Mode, it would actually be a pretty good car. This event is part road rally, part transit, and part on-track competition – the best cars excel at all three.”

The Tire Rack One Lap of America road rally event’s history dates back to the Cannonball Run, a not-quite-legal American highway race from New York City to Redondo Beach, California. It was created by Brock Yates, former senior editor of Car and Driver Magazine, to prove the point that competent, well-trained drivers could safely compete on highways while having a good time reminiscent of barnstorm piloting days. After a few revisions, One Lap was eventually organized into the format it has today. Drivers travel to nine places located in several different states to compete at 18 timed track events including time trials, skid pads, and drag races.

To meet their battery power needs, Team PGR used 27 Superchargers and 22 plug-ins either at the track or hotels they stayed at for a total of 1,500 kWh used to complete the event. Along with the availability of Superchargers and other power sources, the Model 3’s Track Mode gave the team a competitive edge.

“Without Track Mode we likely wouldn’t have made the attempt,” Andrew explained. “We had faith from the development story with Randy Pobst that they had the feature dialed in fairly well…Track Mode (and AWD) allow you to turn with the accelerator which is a fun new challenge and very fast when done right.”

Only minimal aftermarket swaps were made to Team PGR’s midsize sedan before taking on the One Lap challenge to keep the car within “Stock” class requirements. They upgraded the Model 3’s front brake pads and rotors with Racing Brake parts, used racing brake fluid, and opted for Michelin Pilot Sport 4S tires. Aftermarket rear brake pads weren’t available, however, and the stock versions used on the car melted during one of the time trials.

One other hiccup reported was the loss of cruise control, Autopilot, the speed limit display, and automatic wipers about two-thirds of the way into the trip, but those issues only impacted convenience. Tesla’s support service indicated a software bug may have caused the losses, and the issue was fixed after completion of the One Lap with a system reboot.

The tweaks and detailed planning paid off in the end for Andrew and Chad. Team PGR finished first in the Alternative Fuel category, 2nd in the Stock Touring class, and 17th in the One Lap overall out of 77 vehicles competing.

As Tesla enthusiasts, there was more than winning with an all-electric car that motivated Team PGR’s decision to join One Lap this year, namely in sharing everything that comes with the Tesla ownership experience.

“We wanted to show a whole new set of people (enthusiasts) that this was possible, and that the car was very good. At least half the field didn’t know that Superchargers were as prevalent as they are, so they didn’t know how we’d make it. They didn’t know about Track Mode, how well the car works to control the power, cornering, braking, etc. That said, there were a number of people who were very excited/interested to see how we did, who know the performance potential of the car, and [were] rooting for us,” Andrew explained.

The Tesla Model S driving team named Hyliion joined the event as a last-minute entrant after their gas-powered vehicle options became unavailable for the One Lap. The father and son team of Thomas and Brian Healy have their own alternative fuel creds aside from racing their 2017 P100D via Hyliion, their semi truck manufacturing company that’s developing a diesel-electric hybrid Class 8 long hauler. The Model S performed well for the team, although the lack of Track Mode’s thermal protections required adjustments to their driving techniques to compensate during timed trials.

Much like Team PGR, the Hyliion drivers were able to take advantage of Tesla’s extensive Supercharger network to participate successfully in the One Lap and they finished 34th overall.

“The most surprising thing was the abundance of Superchargers that are out there in order to keep the car charged. We weren’t sure going into the event how manageable it was going to be, getting from one track to the next, and being able to do it in the allotted time… Tesla’s done a great job of getting these Superchargers located around the US, where finding a destination to stop at and charge up for 45 minutes is a really feasible thing,” the team told CNET’s Roadshow in comments about the event.

As for Andrew and Chad, they plan to participate in future One Lap events with other Tesla vehicles and also expect more of the all-electric cars to meet them on the tracks.

“Because we are newer to running this car on track, and the car is new overall, we believe it has a lot more potential! We are already scheming about how to improve the car and how to find someone with one of the first [Next Generation] Roadsters when it is released so we can ‘borrow’ it for the One Lap…I think by completing the events we will go a ways toward changing some minds toward electric cars in the performance driving community and it will not surprise me if there’s 5 Model 3’s here next year,” Andrew concluded enthusiastically.

For more about TeamPGR, watch their video below with some updates and highlights from the One Lap of America 2019.