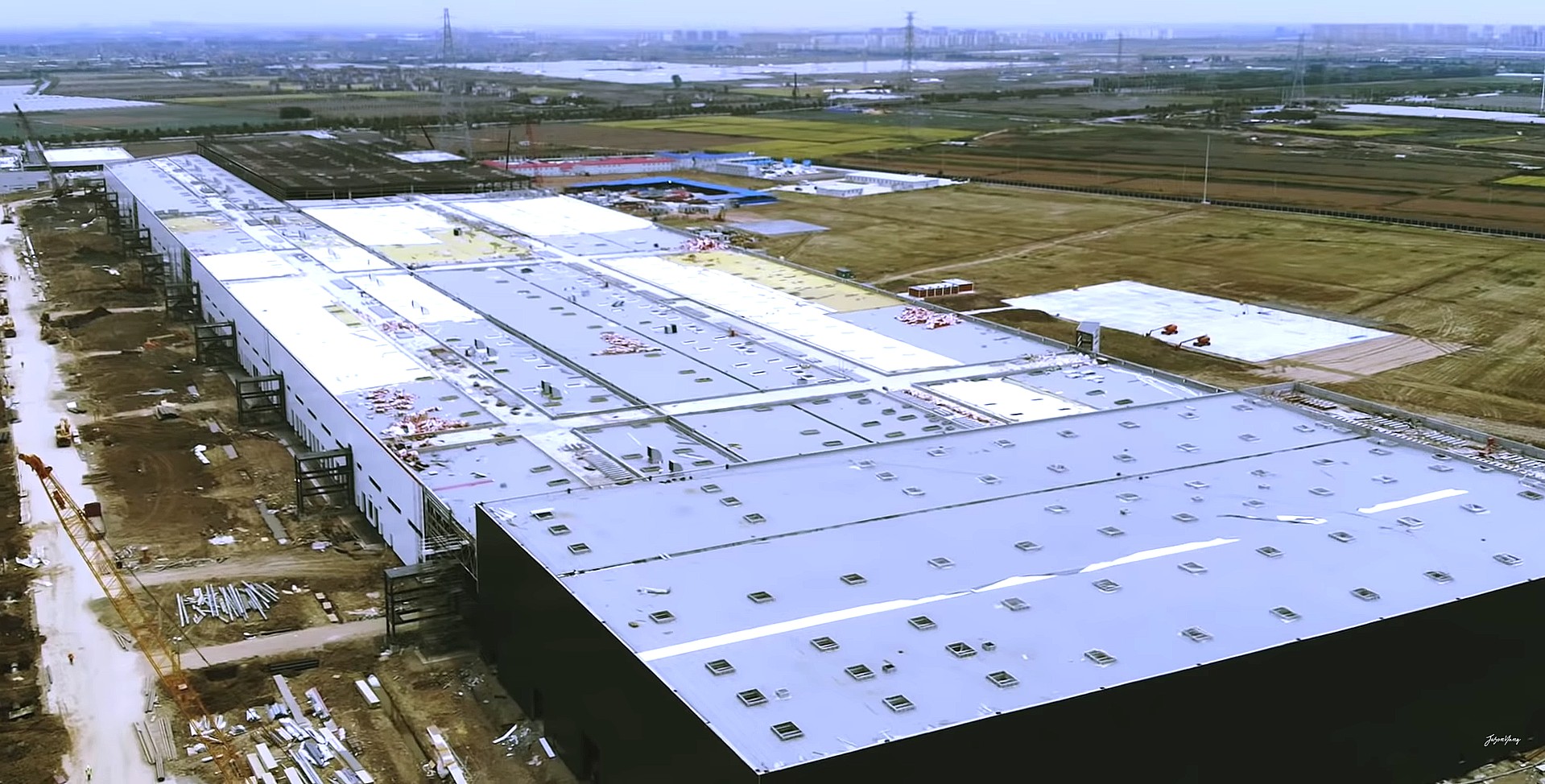 A recent drone flyover of Tesla’s Gigafactory 3 in China reveals that the factory shell of the upcoming electric car general assembly building is all but complete. Seemingly in relation to this milestone, Tesla has also started teasing the vehicle that will be produced in the expansive facility: the Standard Model 3, which will be competing against locally-made electric cars in China.

Videos of the Gigafactory 3 site taken on Sunday, May 26, 2019 (credit to Jason Yang for the footage), reveal that the shell of the general assembly building is all but complete. Roofs and walls look almost complete, and the facade of the facility has even been lined with Tesla’s trademark red color. Fewer heavy cranes are also currently deployed on the site, suggesting that work is now shifting towards the interior of Gigafactory 3.

Near the general assembly building, color-coded modular units have been built. Tesla has not announced what these units are, though their construction and design suggest that they might be dormitories, possibly for employees who will be working on the factory. A wide staging area has also been completed near the facility, which seems to be designed for presentations and events.

Gigafactory 3’s progress and eventual Model 3 production could provide Tesla with an unexpected boost this year. So far, Wall St. analysts, particularly those who have downgraded the stock, and TSLA skeptics have largely disregarded Gigafactory 3 in their thesis. If Tesla pulls it off and actually starts producing the Model 3 in Gigafactory 3 this year, the facility could provide the company the help it needs to meet its ambitious, self-imposed production and delivery goals this year. Underestimated and ignored by the company’s skeptics over the past months, Gigafactory 3 could very well become an inconvenient truth for Tesla’s critics.

The upcoming completion of Gigafactory 3 means that Tesla is a step closer towards its goal of producing locally-made Model 3s in China. Tesla is already selling the Model 3 in the country, but the vehicles command a high price due to import tariffs. Producing electric cars in Gigafactory 3 will allow Tesla to tap into the lucrative and ever-growing Chinese EV market with vehicles that are competitive in price compared to offerings from local manufacturers.

Shanghai officials have urged Tesla’s construction partner to complete the first phase of Gigafactory 3’s construction within May, and looking at the pace of the factory’s buildout so far, this target appears to be quite feasible. Seemingly in conjunction with this, Tesla has also released a couple of teasers pointing to an important announcement on May 31. A recent teaser released on Tuesday involved the company introducing a guessing game for the price of locally-made Model 3. This all but suggests that the company’s announcement this Friday would be in one way or another related to Gigafactory 3 and the electric sedan.

The pace of Gigafactory 3’s buildout has bordered on the ridiculous, with China’s workforce adopting a 24/7 schedule in its attempt to meet the Shanghai government’s target completion date. The facility’s construction is progressing so quickly; it is on track to set a record for the fastest factory buildout in China to date. Gigafactory 3, after all, only broke ground last January, and the first pillar was set up in mid-March. This means that over the span of two and a half months, Gigafactory 3 has transformed from leveled ground and one pillar to a nearly complete factory shell.

Watch Gigafactory 3’s flyover last Sunday in the video below.