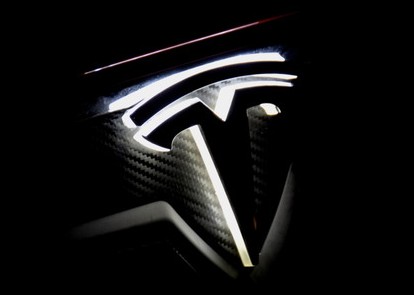 The Tesla Model S Lighted T is a tasteful and unique accessory for any Model S owner who’s looking to add a bit of extra flair. The Model S Lighted T was developed over a period of about 6 months by Rick Hesel, a Model S P85  owner who began developing modifications for his car before it was even delivered (in May 2013). Over a period of several months a number of betas were developed and tested by a group of six Model S owners.  The production version, manufactured in Hong Kong, was developed in collaboration with Oznium Inc, an online retailer specializing in LED accessories.

Rick is developing several other accessories, including a lighted T for the deck lid and a front-rear camera switch, which deploys a Tesla rear camera on the front of the car and enables switching from rear to front views on the touch screen.   These accessories will be made available in April 2014. Installation of the aftermarket Tesla Model S Lighted T can be handled by any savvy do-it-yourself owner or aftermarket shop. Follow these simple step-by-step instructions for a quick and easy install.

UPDATE: EVannex has created an all-ecompasing Lighted T package which contains all necessary components for the installation

Other parts for Oznium controller installs

Other parts for Oznium install with in-dash monitor option

The first step of the process is to remove the Model S nose cone.

Slide dental floss behind the emblems and use a back and forth sawing motion until the emblems are fully detached. Use adhesive remover

to remove all glue residue from the back of the factory Tesla T and arch. Drill 3/16” hole on top right side of indentation for the T and arch and feed the power and ground leads of the Tesla Model S Lighted T through these holes. Crimp a male spade connector on the ends of these black and red leads. Powering on and off the Tesla Lighted T can be achieved through three types of options – on/off with the headlights, with the daytime running lights (DRL) or through a custom dimmer option.

Power On/Off with the Headlights In the exposed area under the liner locate the wire connector plugged in to the back of the headlamp assembly. Locate the red wire with a white stripe. It’s the first wire closest to the nosecone in the lower row. That wire provides 12v power to the headlamps and will be tapped to provide 12v power to the lighted T and arch. Gently pull that wire apart from the surrounding wires. Take a Posi-tap connector of appropriate size. Following the instructions for the Posi-tap (see video: http://www.youtube.com/watch?v=Yiimgl-Rdmw) screw on the tap side to the red wire with white stripe. Attach a 3 foot piece of the red hook-up wire to the connection end of the Posi-tap then screw it back on to the Posi-tap assembly. Next run attach a female spade connector to end of the red lead from the Posi-tap. This will connect to the male connector on the lighted T and arch.

To complete the power and ground connection, crimp a female spade connector on the end of a 2’ long piece of black hook up wire and then crimp a fork spade connector large enough to fit on 10mm bolt on the other end.

Loosen one of the several 10mm bolts connected to the aluminum frame under the frunk plastic piece you removed and attach the U spade connector and tighten down the bolt. This grounds the circuit Place the nose cone near the front of the car just under the crash bar and carefully connect the red female spade connector from the headlight connection to the red male connector on the lighted T and arch. Do the same with the black connection from the ground.

Before snapping the nose cone back into place, turn on the headlights. The Lighted T should light. If not test all of your connections to make sure they are correct and secure.

With testing complete, snap the nosecone back into place on the front of the car, taking care to thread the leads from the T in front of the chrome piece to which the top clip of the nose cone attaches, taking care not to crimp or otherwise stress any of the connections.

Follow the same instructions as powering the lighted T from the headlights, but with one exception – attach the Posi-tap to the orange wire with black stripe in the headlamp wire plug bundle. All other steps are the same as the on/off with headlights procedure.

Power on and off with special effects (dimming, strobe, and heartbeat) using the Oznium controller

Optional dashboard LED monitor of Oznium 12v dimmer This provides a simple way to monitor the status of the lighted T if it’s controlled by the Oznium 12v dimmer and strobe switch. An LED is wired in parallel with the output of the Ozium controller, a resistor is added to the circuit, and the LED is placed in an inconspicuous place on the dash, as shown in the photo below. Here’s how:

[box type=”bio”] Note: The Lighted T and Arch does not fit the early Model S Signature versions due to the unique curvature of the nose cone.