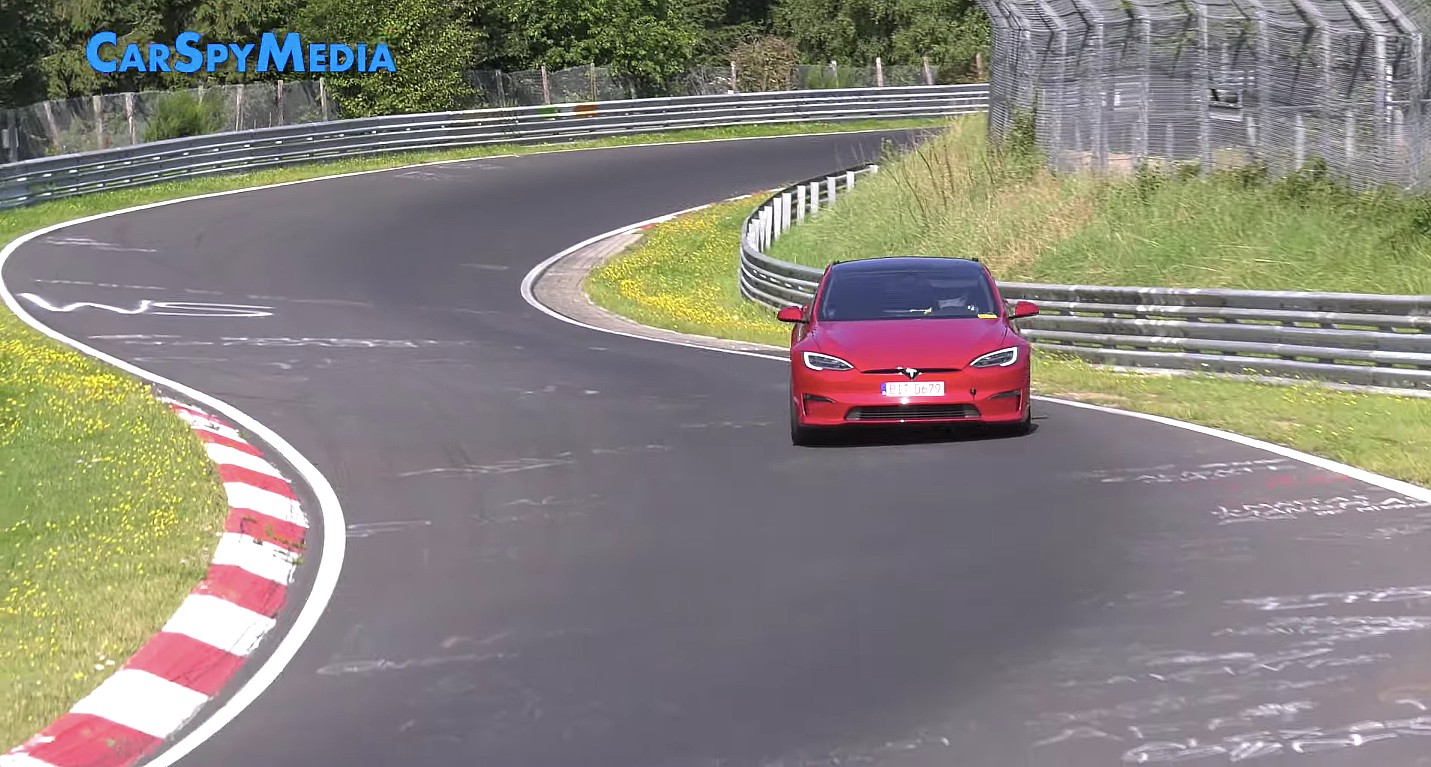 Following an incident last month which involved a crash at the Klostertalkurve section of the Nürburgring, the Tesla Model S Plaid has returned to the iconic 12.94-mile track to push its limits once more. Footage of the large four-door premium sedan ripping through the Nürburgring anew shows that Tesla is determined to set an official lap time for its flagship sedan in the near future.

Fresh footage of the Tesla Model S Plaid’s return to the Nürburgring was shared on YouTube’s CarSpyShots channel, which chronicles vehicle tests at the racetrack. The Model S Plaid was recorded passing through several sections of the Nürburgring such as the Kesselchen, Brünnchen, and Schwalbenschwanz areas. The vehicle could also be seen easily overtaking some German-made electric cars like the BMW i4 and what seemed to be a Mercedes-AMG EQS in camouflage.

The vehicle, however, seemingly wore out its brakes during its recent tests, resulting in the Model S Plaid being towed away. The flagship sedan didn’t seem damaged, however, as it seemed like the driver simply rode against the guard rails until the vehicle came to a stop.

The Tesla Model S Plaid appears to be mostly stock this time around, though speculations suggest that the vehicle was equipped with upgraded brakes, wheels, and tires that would eventually be part of a “Track Pack” that would later be offered for the flagship sedan. If this were indeed the case, the “Track Pack” components seem more than capable of keeping the 1,020-horsepower beast of a car well-planted, at least based on how the Model S Plaid took on the track’s twists and turns.

Interestingly enough, the Model S Plaid had two passengers when it was recently filmed at the 12.94-mile track. This suggested that Tesla is still collecting more data on its flagship vehicle, possibly as part of preparations for an upcoming official lap time attempt. Tesla seems to be conducting a lot of testing in the Nürburgring over the past months, with reports back in July revealing that the company was evaluating the Model S Plaid’s track performance with both a regular steering wheel and a steering yoke.

Watch the Tesla Model S Plaid’s return to the Nürburgring in the video below.