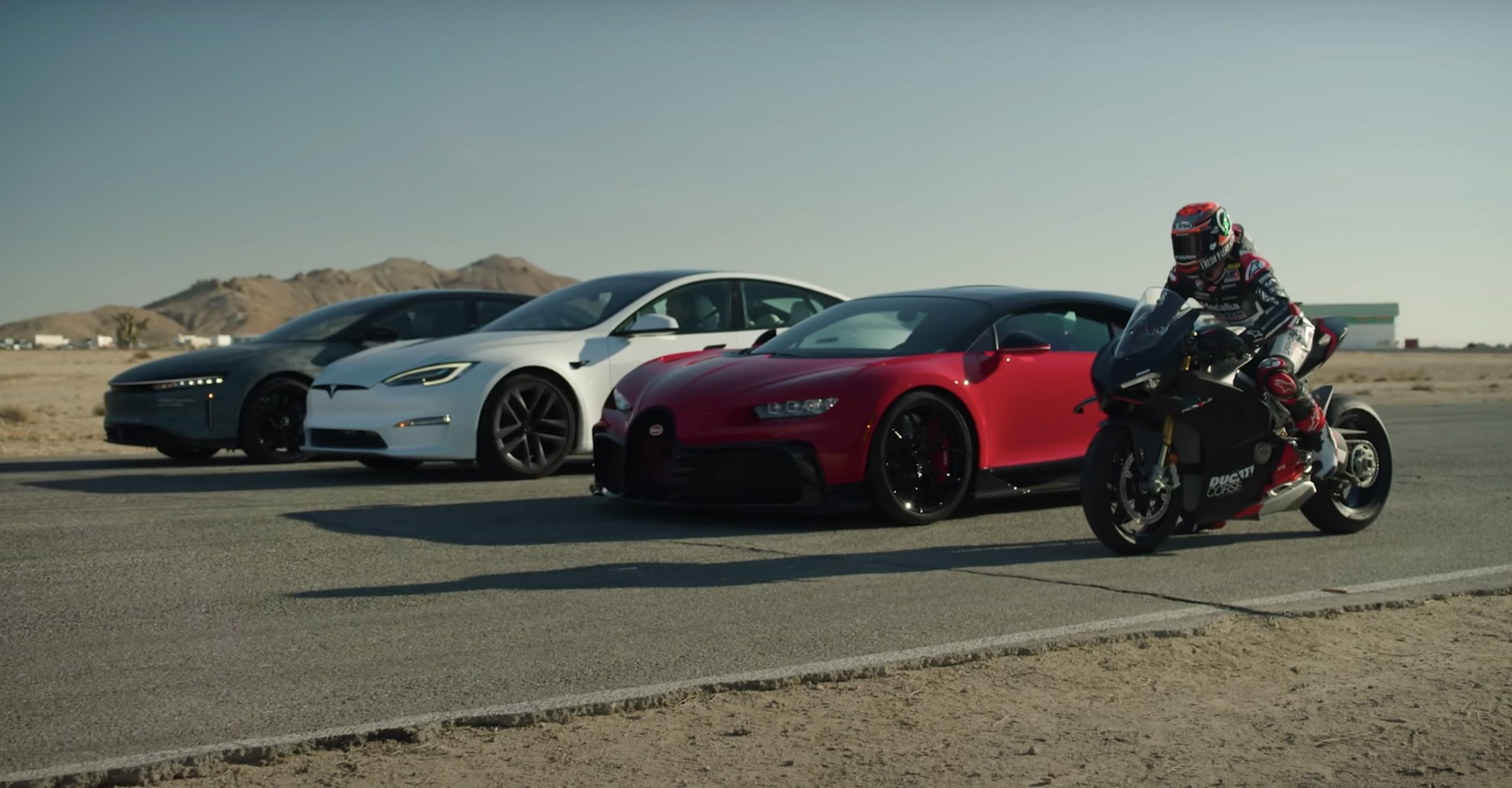 The stakes in the electric vehicle war have just been raised. Following a drag race against a frighteningly quick all-electric champion and the pinnacle of the internal combustion engine — both in four and two wheels — the Lucid Air Sapphire proved that it has what it takes to be at the top of the drag race summit.

YouTube channel Hagerty gathered some of the world’s fastest vehicles in a recent video. Among the vehicles was the Tesla Model S Plaid, the $136,000 supercar killer that has slain countless performance vehicles on the drag strip, including those that were several times its price. Another was the Bugatti Chiron Pur Sport, a limited edition, $4 million, 1500-horsepower, 8-liter, 16-cylinder, four-turbocharged hypercar.

The Lucid Air Sapphire is — similar to the Model S Plaid — fitted with three electric motors. Its horsepower is listed at over 1,200, which is not that far from the Plaid’s 1,020 horsepower. The Sapphire is notably more expensive than its Tesla counterpart, however, with Lucid’s configurator pricing the car at $250,000 to start.

As noted by the motoring channel, the Lucid Air Sapphire was able to complete the quarter mile in an extremely impressive 9.1 seconds at 156 mph. The Bugatti Chiron Pur Sport, despite being left behind by the all-electric duo at the initial stages of the race, ended up completing the run in 9.3 seconds while traveling at 156 mph. The Tesla Model S Plaid, the cheapest car in the race, completed the run in 9.3 seconds at 152 mph. The Ducati Panigale V4 SP2, during its race with the Sapphire, completed the race in 9.3 seconds while traveling at 157 mph.

A Win With an Asterisk

While the Lucid Air Sapphire truly dominated Hagerty‘s tests, it should be noted that the vehicle used in the drag races was not exactly a car that was just pulled from someone’s garage. Instead, it was an engineering prototype expected to be identical to the Lucid Air Sapphire that would eventually be delivered to customers. So far, Lucid’s website notes that the flagship car should start deliveries in the first half of 2023.

Tesla, for its part, would likely not take this loss lying down. While an argument could be made about the race since the Sapphire was an engineering prototype and the Plaid is a notably more affordable car, the fact remains that the fastest Model S in production today lost the race. But Tesla is an incredibly competitive company. One would remember how hard Tesla worked to set a record at the Nurburgring. The Model S Plaid, in its current state, has not been unlocked to its full potential either. As noted by Tesla, the Model S Plaid’s 200 mph top speed would be unlocked later when the company releases the vehicle’s Carbon Ceramic Brake Kit and its highly-anticipated Track Pack.