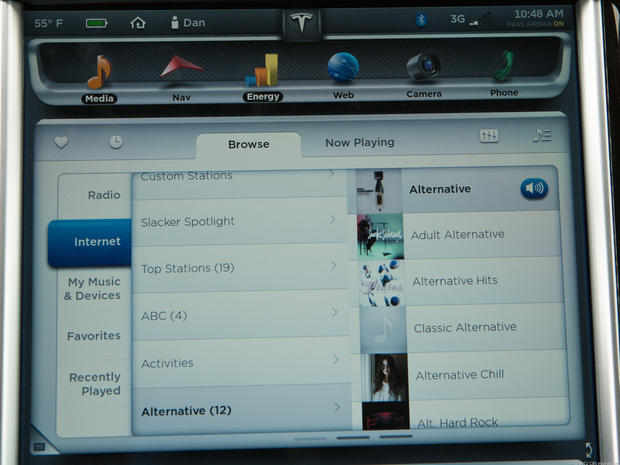 We hear nothing but raves about the performance of the Model S. Instant torque, smooth handling, superior styling and of course, the 17″ touchscreen. These are all formidable attributes that make the driving experience thrilling. One feature of the car that’s often neglected is the sound system. The Model S is a very quiet ride on the outside, but can make a big noise on the inside.

The Evolution of Car Music Systems

When I was growing up it was possible to come across a car that did not have a radio in the dashboard.  Personal classifieds selling cars would frequently advertise that the sedan had a “radio” in hopes of enticing a potential buyer. My father owned 43 cars in his life and we would scour the Sunday paper together for deals. Newspaper classified ads charged by the word so savvy sellers would use code to communicate features. If you saw R + H, it meant the car had a radio and a heater. PS and PB were power steering and power breaks. You get the picture.

My first car had an AM/FM push button radio which meant I could program preset stations and not need to turn the tuning dial. In very short order I replaced it with an in dash 8-Track player. Have I lost any of you? In 1979 Sony invented the Walkman and so my next car had an audio cassette player that allowed me, for the first time, to make my own playlists at home from 12″ vinyl albums and take them on the road in portable plastic slabs with reel to reel tape embedded inside. That was amazing. Cars rarely had rear speakers, so I would install my own by cutting out the cardboard deck behind the back seat and running wires under under the door thresholds to the dash. People love and need music and so automobile sound engineering was born.

Car makers enlisted home system acoustic experts to design sound systems for their cars, adding  an exciting new angle for marketing. This trend has continued and has been improved upon for many years. The top rated systems found in cars are: Bose, Harman/Kardon, Boston Acoustics and more recently Bang & Olufsen. Great brands with quality sound. Home stereo systems were installed in cars to allow customers to personalize their rides even further.

Tesla took a different approach. Instead of hiring established home stereo system makers to design a sound system for the Model S, they hired recording professionals to create an unparalleled music experience inside the cabin. When you configure your Model S for purchase you won’t find claims that the sound system is from Bose, or any other brand. The base price gives you a good 7 speaker array. There is no CD player in the Model S. Instead they provide an interface that allows you to access standard AM/FM/FM-HD radio stations as well as browse Slacker and Tunein Radio, both cloud music sites. You can also log into your XM radio subscription. HD Radio is kind of an unknown music gem. The technology enables stations to broadcast a digital signal over traditional radio frequencies allowing it to have up to 3 additional and unique streams of programming. The sound is crisp and often commercial free. In my book the way to go when ordering your Model S is upgrade to the Ultra High Fidelity Sound package. You get a 12 speaker set-up, including an 8″ subwoofer that have been carefully placed and tuned to deliver sound directly to the people in the cabin. It also includes more powerful amps for a richer sound. If you have a pano roof you get a different set-up than the guy who opts for a solid roof. Brilliant. Unlike many of my Model S comrades, I don’t have a long commute, so I go out of my way to be in my car. When everyone is sound asleep I often steal off to the garage, settle into the napa leather seat and listen to music in my Model S. If it’s cold I can warm the car. In summer the AC is engaged. No fumes means no problem. I have been known to have a glass of wine with me, which is the only time I am in my car with alcohol. It’s not possible to experience sound at that level in that environment with any other car.

As an audiophile I’d love to see Tesla publish more content on how the system was designed, who worked on it, the technical specs of the speakers and processors, the sound design approach, etc. What’s the sound roadmap? What else is in development? The cloud services give you hundreds of options and they’re great for exploring new music. But if you want to listen to your personal library it will need to be in digital format and portable. I have over 13,000 songs in my iTunes library and it continues to grow, which means I need a lot of storage. A great solution is the Kingston 32GB Micro USB  2.0 storage device. I chose Kingston because it has fast transfer times and is extremely small, protruding less than half an inch when inserted in the Model S USB port. Some memory sticks are large and can be broken off if bumped. The profile on the Kingston is so small you don’t have to worry about that.

Transferring songs from your iTunes library to the drive is a cinch. Simply select and drag. The Model S interface will organize them by song, artist, genre, album seamlessly. Playlists are a bit more challenging as iTunes doesn’t make them easy to export. You have to create a folder on your desktop, give it your playlist name then export the individual songs to that folder. From there drag the folder to your memory stick. The playlist will appear in the “By Folder” tab on the Model S media screen when you plug in the device. I recommend creating a playlist in iTunes for your Model S before transferring to your portable media. This will make it easier for you to add or subtract individual songs. Taking the time to organize your playlists before you transfer to a portable device will pay dividends. If you remove your memory stick, reboot your system or receive certain over the air updates the OS will need to re-read your music once you start the car. The read time depends on how many songs in your library.

I’m a stickler for high quality sound. Experimenting with the acoustic adjustments is critical to accomplish ultimate sonic enjoyment. Don’t assume your home stereo settings can simply be transferred to the Model S. You may like a lot of bass at home, but in a car this can be trumped by strong treble and mid range selections. I find the Model S system to be strong on the high end and so I tone them down a bit in the car vs. what I listen to at home. My fade setting favors the rear seats by about 10%. This increases the depth of the music, filling the cabin from behind as much as it does from the front speakers. I also adjust the balance by about 5% to the right since I’m on the left side of the car. Of course these suggestions vary by type of music you listen to. I wish Tesla offered presets for easy toggling when my music mood shifts. More about improvements later on. Always do your adjustments while parked with the windows closed and listening to songs you are very familiar with. The touchscreen is amazing, but it can be distracting. I recommend shifting the Media screen to the top to reduce the time it takes to shift your eyes when making adjustments. Volume, forward and backward are the most common uses. Be sure and do those from your steering wheel controls. Tesla offers a voice command feature. You can say “Play, Beautiful Day, U2,” and you will get a screen of choices. It’s very cool. I use it most frequently when I want to hear the latest release from a favorite artist that I don’t own yet. I do not recommend listening to music streaming through any bluetooth connection. The sound is compressed and the output is severely diminished. It may seem convenient, but spend the time to put your music on a portable device at high quality. Your ears will thank you.

I would love to see Tesla focus more on music than they do today. No firmware update, at least to my knowledge, has addressed anything related to the sound system. Advancing this feature does not trump safety, but continuous sound improvement is one feature that can take full advantage of the over the air updates. Other cars can’t do this. Here’s my wish list.

When the weather is warm and the windows are down, the only sound my Model S makes is whatever song is coming from my playlist.