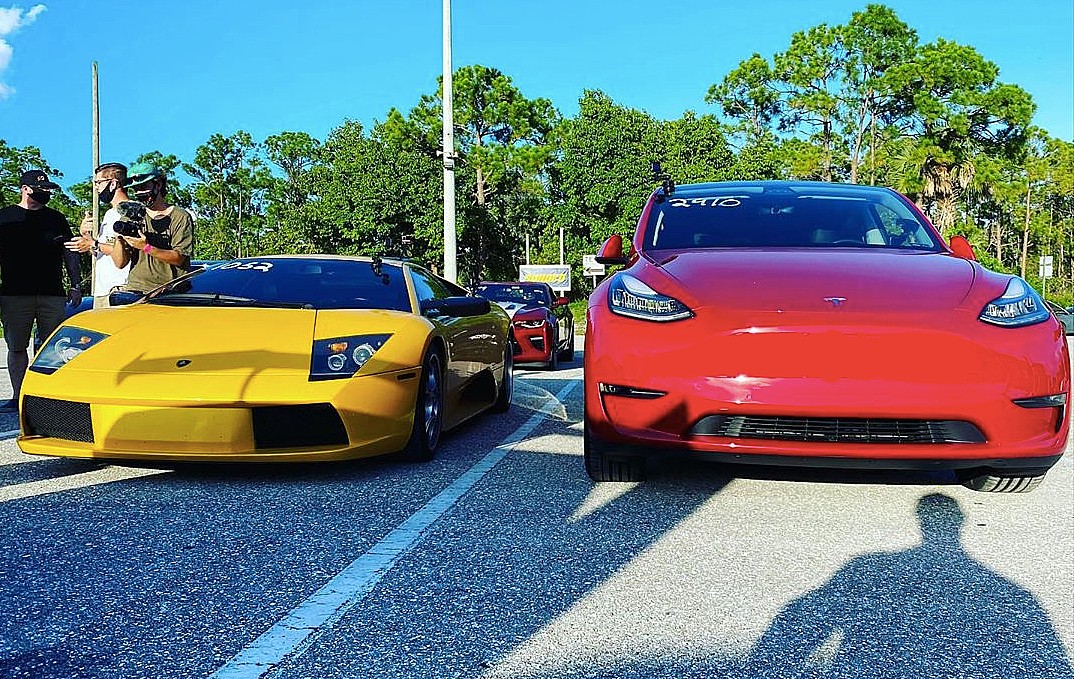 The Tesla Model Y Performance may be the electric car maker’s most conservative “P” branded vehicle in its lineup today, but the all electric crossover is no slouch. With its 0-60 mph time of 3.5 seconds, the top tier Model Y has enough acceleration to battle high performance vehicles on the quarter mile. This was put to the test recently, when the Model Y Performance faced off with a literal supercar, a V12 Lamborghini Murciélago.

If one were to look at the Model Y and the Murciélago side by side, one would likely think that a race between the two vehicles will heavily favor the Italian supercar. The Model Y is a crossover, after all, and it looks very tame compared to the Lamborghini, with its rather heavyset look that is reminiscent of a Model 3 that ate a little bit too much for dinner. But that being said, the Tesla Model Y has the advantage of instant torque from its electric motors, which gives it an advantage in drag races.

Such a race was featured recently on YouTube’s DragTimes channel. Brooks Weisblat, the host of the channel, was behind the wheel of the Model Y Performance, while one of his friends was behind the wheel of the Lamborghini. Specs wise, it seemed like the V12 supercar would have the race in the bag, with its 6.2 liter V12 engine and Flame Tune, which gave the car ~570 hp. The Murciélago commanded a supercar worthy price during its production, with its sticker price of $279,000.

The Model Y, on the other hand, is fitted with two electric motors that make a combined 473 hp. The all electric crossover’s battery also had an 89% state of charge. The Model Y is only a fraction of the V12 Lamborghini’s cost, with its $62,000 price. That’s a premium price for a crossover, but that’s not too bad considering that it’s a vehicle that could potentially give a fight to supercars on the drag strip.

Based on the Model Y Performance and Lamborghini Murciélago’s race, it seems that Tesla’s most conservative “P” branded vehicle could actually give a good fight to a supercar on the drag strip. The Model Y Performance completed the quarter mile in 11.928 seconds, while the V12 Lamborghini finished the race in 14.105 seconds. By the end of the race, the Model Y was traveling at 114.71 mph, while the Lamborghini Murciélago was traveling at 118.78 mph.

Of course, a good part of this result is due to the Weisblat’s excellent reaction time, as well as the fact that the Lamborghini ended up with a less than stellar launch. That being said, it’s still quite impressive to see the Model Y Performance gripping the drag strip with its tires and launching like a silent rocket all the way to the end of the race.

Watch the Tesla Model Y battle the Lamborghini Murciélago in the video below.