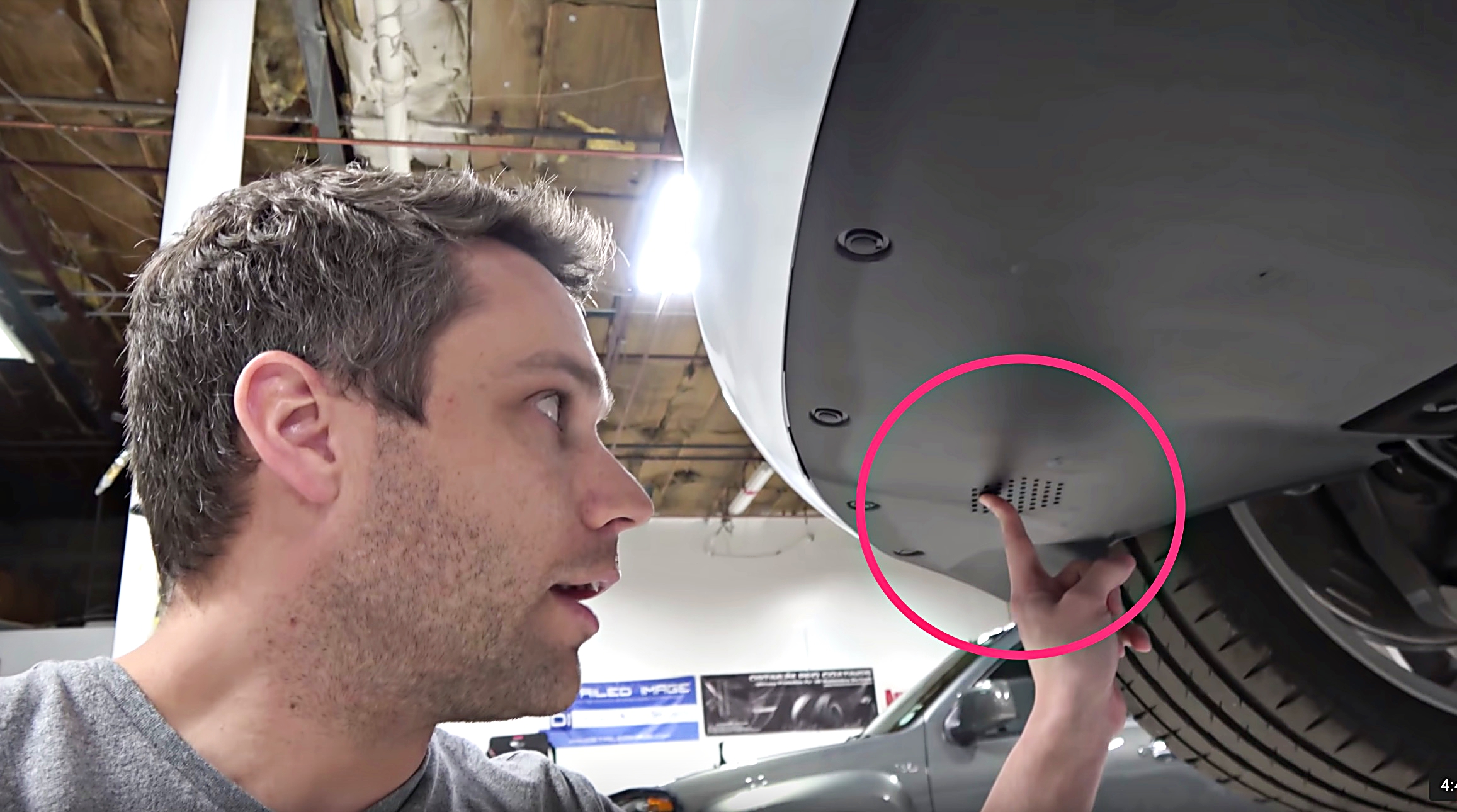 It looks like Tesla may have already begun getting its newer manufactured vehicles ready for compliance with an upcoming National Highway Traffic Safety Administration (NHTSA) requirement for electric and hybrid electric vehicles to make noise when traveling at slow speeds. In a video posted by Tesla community’s resident DIY expert, Erik, or otherwise known as DÆrik from his YouTube channel, the undercarriage panel of his Performance Model 3 has what appears to be a speaker grill – the front paneling is adorned with a series of holes in a hexagonal shape. Once the paneling is removed, three mounting points are revealed to be molded into the same area, hinting at a future device to come.

The video was made in response to inquiries about a photo of the Tesla’s undercarriage posted to Erik’s Instagram account where someone noted the series of holes in the plastic panel below the front bumper. Tesla’s parts catalog doesn’t currently show the grill cutout, but As Erik notes in the video, he found a Model S diagram three years ago showing a layout including a future noise maker labeled “Speaker Pedestrian Noise”.

We’ve reached out to Tesla for comment about the new “speaker grill” found in the underside of the Model 3 and will provide updates as we receive them.

My Performance Model 3 is up @coloradodetail ! Here's a quick look at the undercarriage of a Model 3! #tesla #teslamotors #teslamodel3 #elonmusk

Blind pedestrians rely heavily on auditory clues to anticipate traffic patterns and know a vehicle is near, and that means the quiet nature of electric and hybrid vehicles at low speeds may pose a greater danger to them than traditional internal combustion engine (ICE) vehicles. Bicyclists and other pedestrians also utilize usual car sounds as part of their personal safety awareness, so there’s a population of travelers that could be significantly impacted by the influx of EV/HEV vehicles on the roads. The potential danger has not gone unnoticed by those in charge of public safety.

This concern was elevated to the federal level by the NHTSA, and the eventual result was a 2010 law (Pedestrian Safety Enhancement Act of 2010) requiring electric and hybrid vehicle manufacturers to install devices which emit noise while traveling slower than about 19 mph. Higher speeds have tire and wind noise that’s sufficient for pedestrian needs. The implementation rules were finalized in February last year, and manufacturers have until September 1, 2020, to be fully compliant, with half of the vehicles equipped by September 1, 2019.

While the proposal may not be popular with all parties involved, the NHTSA points to its October 2009 report entitled “Research on Quieter Cars and the Safety of Blind Pedestrians, a Report to Congress” as a primary basis for its rulemaking. In the report, the agency found an increased rate of accidents involving pedestrians with hybrid-electric vehicles compared to ICE vehicles in roadways and zones with low-speed limits, during the type of weather or any time of day. By implementing the rules as passed, the NHTSA expects to prevent 2,400 injuries and reduce the $250-$320 million costs which result annually due to limited ability to detect quiet EVs/HEVs.

Another coming requirement is that the noise emitted must be identifiable as a vehicle, a limitation that will likely only inspire creativity. If manufacturers want to take a fun route with the noise options, i.e, license the Jetson family’s flying car sound from Hanna Barbara as suggested by Erik, they’ll have to make sure it’s consistent among their vehicles – or at least consistent among package options. Also, drivers cannot be allowed to modify the sound themselves.

Manufacturers are free to modify the sounds from the factory end, though, an option Tesla’s CEO Elon Musk has previously capitalized on for other noise-centric features in the electric car company’s vehicles. However, letting drivers determine their car’s noise via app or button push is still in the air. The NHTSA will publish a separate document at a later date to determine whether driver-selectable sounds are a good idea, or at least compliant with the purpose of the law.

Watch the video below to see Erik’s Model 3 inspection: