During Tesla’s third-quarter earnings call, Elon Musk noted that the company continues to make headway on its future vehicles. Musk noted that he had already approved the production of the Model Y prototype, while pointing out that the company is making progress on the next-generation Roadster and the Tesla Semi. Musk reiterated his enthusiasm about the Tesla pickup truck as well, which he admits is a vehicle he is most excited about.

Some of the improvements to the Tesla Semi appear to have been teased in one of the company’s recently-published patent applications. The patent, which was published on October 18, 2018, and titled “Automatic Tire Inflation System with Thru-Hub Air Feed,” outlined a system enabling Tesla’s vehicles to inflate or deflate their tires as necessary. While several vehicles today already have Automatic Tire Inflation Systems, Tesla’s patent application notes that conventional ATIS have much room for improvement.

“These prior solutions had a number of shortcomings. With some prior art techniques, air was fed through hollow drive axles to a fitting located on the end thereof. The fitting was then coupled to the air inlets of the tires. To couple the air into the hollow drive axles, a rotatingly attached fitting coupled air from an air storage to the inside of the hollow axles. This fitting was subject to leakage of contaminants. These contaminants interfered with the operation of the ATIS and eventually caused the ATIS to fail.” 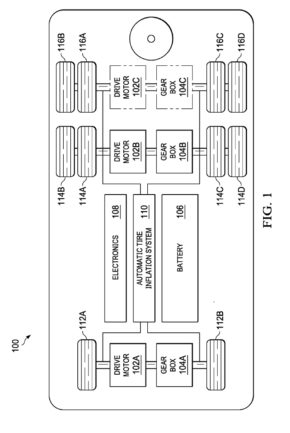 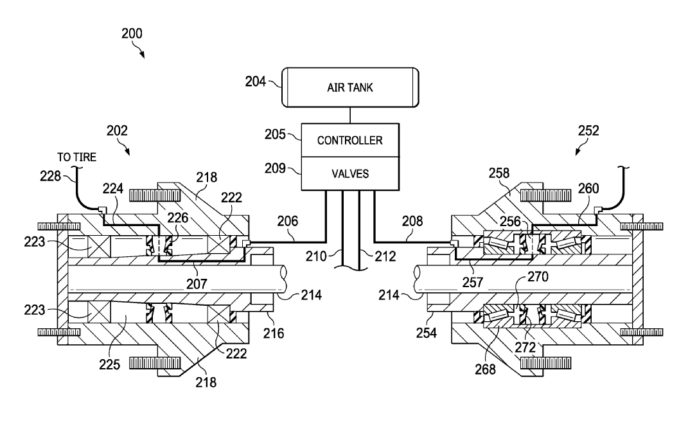 Tesla’s ATIS patent involves a system that features valves, a rotary air seal, and bearings, to avoid contamination. With such a system in place, Tesla notes that the wheels of its vehicles would likely last longer, and tires would require even less maintenance.

“Thus, as compared to the prior ATIS systems, the ATIS of the first embodiment, significantly reduces contamination in the ATIS air stream. Reduction in contamination extends the life of the ATIS, extends spindle life, extends hub life, and extends serviced wheel/tire lives and extends maintenance intervals.”

While the diagrams in the patent application suggest that Tesla’s upcoming ATIS would be used for the Semi, the applications for the automatic tire inflation system for the company’s other, upcoming vehicles are notable. Having the capability to automatically inflate tires depending on the terrain, after all, would allow Tesla to start giving its vehicles some form of off-road capability. Under-inflated tires are key to off-road driving, since they are capable of flexing more, allowing vehicles to “crawl” over rocks and other sharp, irregular terrain. Under-inflated tires also have a wider contact path, allowing vehicles to gain more traction in terrain like deep sand or soft snow.

For now, Tesla’s vehicles are optimized for city and interstate driving, and while there are accounts of the Model X being taken off-road (EV YouTuber Bjorn Nyland’s extreme driving test sessions come to mind), the company’s electric cars are yet to have features that are specifically geared towards off-road driving. With an ATIS system, Tesla’s upcoming vehicles such as the Tesla pickup truck, and even the company’s SUVs like the Model Y and a future iteration of the Model X, could have the ability to explore areas beyond paved roads. Such capabilities would likely be invaluable, considering that legendary vehicles like the Ford F-150 and the Chevy Blazer established their legacies by proving themselves capable in areas where neither asphalt nor concrete is present.

Tesla’s full patent for its Automatic Tire Inflation system could be accessed here.