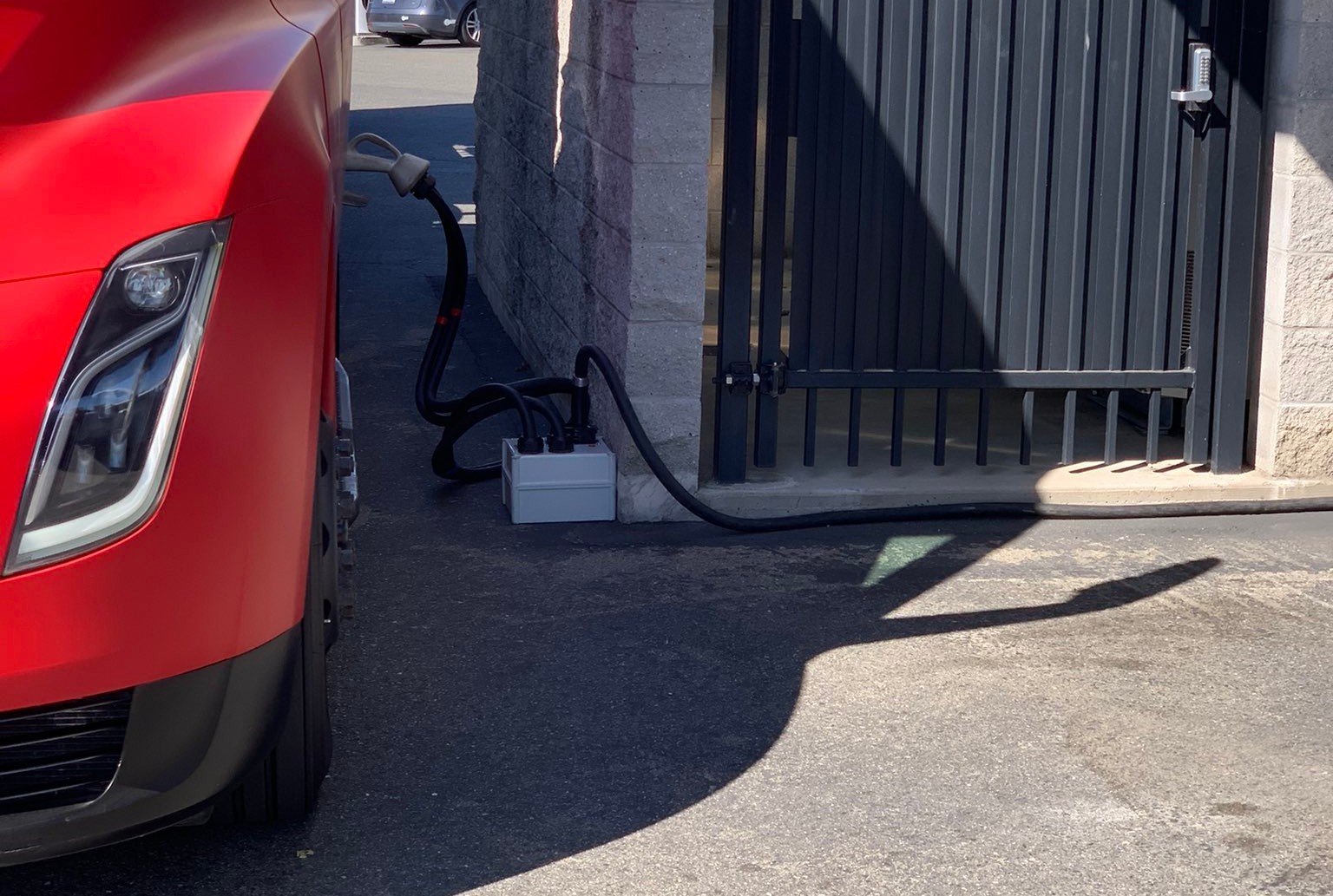 Tesla is currently in the final stages of its end of quarter production and delivery push, and it is all hands on deck. With Elon Musk rallying Tesla staff to manufacture and deliver as many vehicles as possible, even prototypes like the Tesla Semi have been deployed to deliver the Model 3 and Model Y. Sightings of the Class 8 truck have been reported by the Tesla community online, most recently in the Rocklin Supercharger.

The red Tesla Semi prototype, which has also been sighted winter testing, stopped at the charging location while carrying Model 3 and Model Y. During its stop, Tesla owners were able to get up close and personal with the upcoming vehicle, including its ad hoc “Megacharger” setup. As could be seen in photos of the vehicle, the Semi’s prototype’s charging solution today involves the Class 8 truck hooking up to two Supercharger stations.

This is quite an interesting update to the Semi’s ad hoc Megacharger solution. When the Semi prototypes were initially spotted in the wild and in Superchargers following its unveiling in 2017, Tesla community members have observed that the vehicle’s charging unit had to be connected to about four to five Supercharger stalls. These further fueled speculations which suggested that the Tesla Semi would be fitted with a monster battery pack.

Tesla’s battery technology has gone a long way since the Semi’s unveiling. Filings to the City of Fremont point to Tesla ramping its project Roadrunner initiative, which involves the production of the company’s own custom-designed battery cells. These battery cells, whose details are expected to be discussed in the upcoming Battery Day event in September, will likely be the much-rumored million-mile batteries, which outclass the company’s current cells today, bar none.

With the development of Tesla’s next-generation batteries in mind, there is a good chance that the Semi’s updated ad hoc Megacharger setup may be an indication that the Class 8 truck has been installed with a more efficient battery unit. The fact that its charging system today could be supported by two 150 kWh Supercharger V2 stalls, after all, is quite an encouraging sign overall.

When the Semi was initially unveiled, Elon Musk stated that the vehicle will be supported by a network of Megachargers, which would be able to provide 400 miles worth of charge to the Class 8 vehicle in 30 mins. The progress of this Megacharger ramp has been unknown for some time now, save for initial reports that some reservation holders of the truck were installing dedicated charging stations in their warehouses for the Semi.

The Tesla Semi is expected to enter volume production soon, as per a recent message from Elon Musk to Tesla employees. The Semi is expected to be released with two variants: a 300 mile version for short range routes and a 500 mile variant that will be more capable for longer trips.