New images from Giga Nevada suggest that Tesla may be looking to develop a mobile “Megacharger” system for the upcoming Class 8 all-electric Semi. The system seems to be powered by Powerpack batteries.

To clarify, the “Megacharger” is the name of the Semi’s charging infrastructure, as mentioned by CEO Elon Musk during the vehicle’s unveiling in late 2017. Pictures shared with Teslarati show Tesla’s progress with the buildout of Megachargers at Giga Nevada–and maybe a little more. There are a least two Megachargers at the Gigafactory, and Tesla might install more in the future, especially as the Semi’s limited production starts rolling.

However, right behind the Megachargers is a trailer with four Tesla Powerpacks and two urban charger stalls. According to Teslarati’s source, there were two trailers at Giga Nevada, and one of the trailers was fitted with Tesla Powerpacks, which may hint at a potential portable charging system. 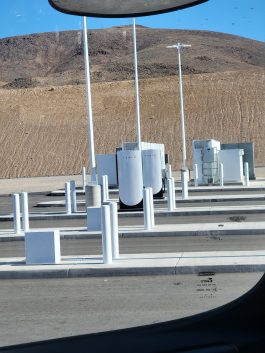 The trailer in the picture recently shared with Teslarati held two urban chargers, suggesting a potentially similar charging setup as the Semi prototype spotted in 2020. As for the use of Powerpacks instead of larger Megapacks, it might be down to cost.

One Megapack has a capacity of 3 MWh and costs about $1.2 million as of July 2021, when Tesla updated the Megapack’s order page. A single Megapack could potentially charge several Semis consecutively, but the costs for such a solution would be substantial. Considering that one Tesla Powerpack has a capacity of up to 232 kWh, four units of the commercial-grade battery would likely have about ~900 kWh of energy capacity. This would likely be enough to top up a couple of Semis at a time, without requiring the full costs of a Megapack-powered system.