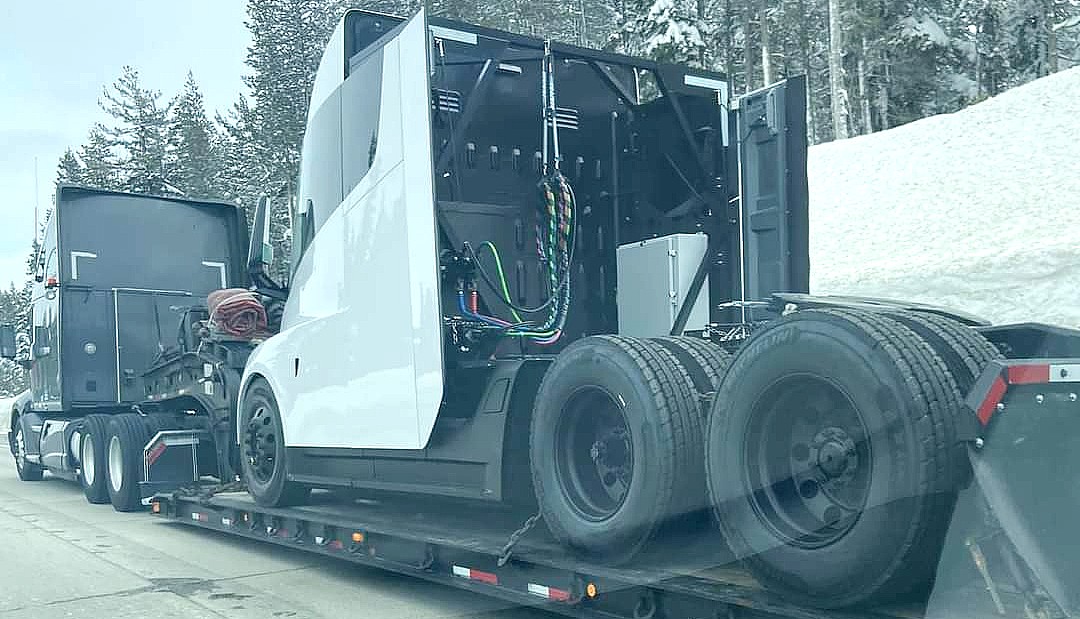 It appears that Tesla has produced another unit of its updated Tesla Semi, with one of the Class 8 trucks recently being spotted in Tahoe, seemingly on its way back to the Bay Area. Like the previous sightings of the updated vehicle, the Semi featured some interesting characteristics, including some unique equipment at its rear that was not present in the other two updated Semis spotted recently.

Late last year, rumors emerged stating that the EV maker is looking to produce four new Tesla Semi units, with two reportedly being used for road testing, one being used for cold-weather testing, and another being used for durability testing. Sure enough, early this month, a white Tesla Semi with updated windows, door handles, and tail lights was sighted in Sacramento. The vehicle looked refined, and it appeared that it was about ready to enter production.

A second, road-weary Semi with updated features was soon sighted in Chicago, IL. While the vehicle was the same color as the Semi in the Sacramento sighting, and while both trucks were equipped with silver wheels, the equipment on their rear and the type of tires they had was different. The Semi spotted in Sacramento featured a rather large, mysterious box connected to several data cables as well, while the vehicle in Chicago featured no such equipment. For its part, the Semi spotted in Tahoe also had some unique characteristics.

Immediately noticeable from the Tesla Semi in Tahoe was the vehicle’s wheels, which were painted back. The vehicle’s rear also featured a completely different setup than the first two, with a hefty box fitted on one side of the truck. Overall, the Semi seemed like it was freshly built, fueling speculations among the electric vehicle community that the truck was the third of the four new prototypes hinted at by reports in late 2020.

Yo @klwtts, look what's on it's way back to Bay Area! Currently in Tahoe 🏔️ pic.twitter.com/xpfJ4vpWrb

Recent reports have pointed to the idea of the Tesla Semi entering limited production this year, with anonymous sources familiar with the electric car maker’s plans suggesting that the company plans to start building release candidates around May 2021. Pilot production of the vehicle is also rumored to begin around July 2021. By the end of the year, Tesla is reportedly looking to produce about 100 Semis per week, allowing the EV maker to end the year with a total of 2,500 units built.