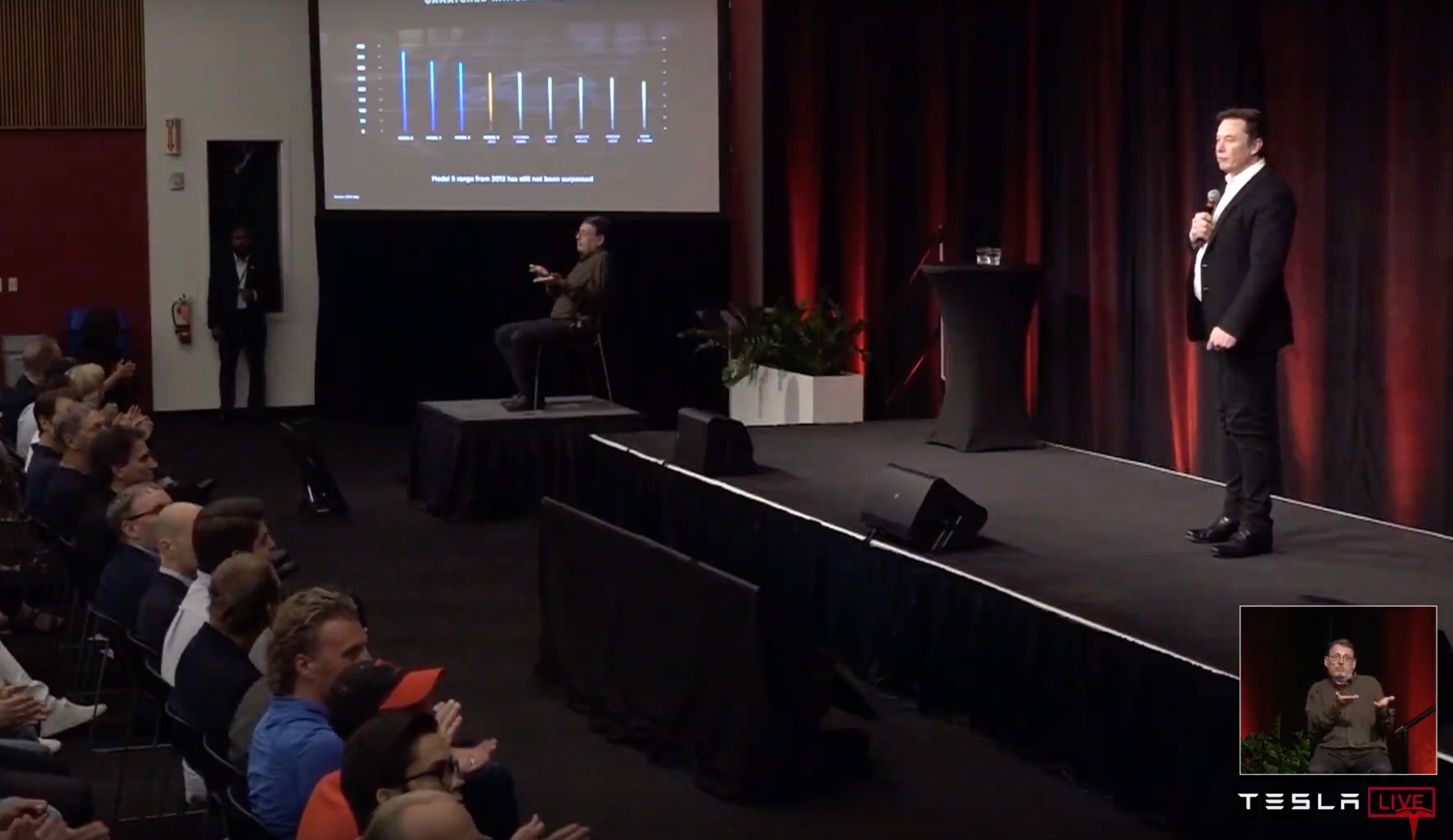 Tesla’s (NASDAQ:TSLA) 2019 annual shareholder meeting comes at a rather historic time for the electric car maker. The past year has proven to be a roller coaster of sorts for Tesla’s investors, with TSLA stock rising as high as $387.46 per share and falling to as low as $176.99 per share. At the center of these wild swings is the Tesla Model 3, which is currently in its international rollout.

The past month was a challenging time for Tesla’s investors. Following the company’s lower-than-expected delivery and production figures in the first quarter, Tesla was hit by a perfect storm that included multiple negative analyst forecasts, pessimistic narratives from the media, and allegations that the demand for the company’s vehicles is waning. These concerns have largely been dispelled in recent weeks, as signs have emerged that Tesla, and particularly the Model 3, might be poised to pleasantly surprise this second quarter.

For the annual shareholder meeting, Elon Musk and Tesla’s executives are expected to address questions from retail investors that could range from the company’s current projects such as the Model 3 ramp to its future endeavors such as the Tesla Pickup Truck. Questions aggregated by investor communication platform Say also point to inquiries about Tesla’s rationale behind the Maxwell acquisition, as well as the company’s plans for its insurance service, among others.

The following are live updates from Tesla’s 2019 annual shareholder meeting. Fellow Teslarati reporter Dacia Ferris and I will be updating this article in real-time, so please keep refreshing the page to view the latest updates on this story.

Simon 16:15 PT: And that’s the 2019 Annual Shareholder Meeting! Elon, JB, and Drew get a standing ovation from the audience. How often does that happen in a shareholder meeting?

Dacia 16:14 PT: Will Tesla build an aquatic car? a shareholder asks. “It’s funny you mention that…,” Elon begins, citing a submarine car design he has. “I think the market for this will be small.”

Dacia 16:12 PT: Elon debates the merits and deficiencies of advertising and educational campaigns…would it draw more attention to issues than is merited? He likes the idea of film challenges.

Simon 16:10 PT: On a question about advertising, Elon notes that such strategies are not necessary right now, especially since Tesla sells all the cars that it can produce. Elon also expresses his reservations about advertising, particularly the level of trickery that goes with it. “We could have advertising for information to refute the misinformation,” Elon says.

Simon 16:09 PT: Responding to a question from PETA about leather being used for the steering wheels of Tesla’s electric cars, Elon notes that the Model Y, and the Model 3 will be vegan.

Simon 16:06 PT: Elon, JB, the board, and the company get a vote of support for Tesla from an investor in India. Elon raises his fist in a show of appreciation. Epic.

Dacia 16:05 PT: “What do you ask a team that has put a Roadster in freaking space?” a shareholder and fan of Elon exclaims in lieu of a question. He also laments Nikola Tesla’s lack of funding to pursue his experiments.

Dacia 15:59 PT: “I love horses,” Elon clarifies, ducking on a question about the specific Tesla truck towing capacity. “If the F-150 can tow it, the Tesla truck can do it.”

Simon 15:58 PT: Elon also recognizes the shift of other companies to renewable transportation. This relates to carmakers such as Porsche, which as abandoned diesel in favor of electric and electrified vehicles.

Dacia 15:57 PT: Awww… JB and Elon are reminiscing about the veeery early days of the company. Elon reminds us that he totally thought they’d fail. (10% chance of success)

Simon 15:54 PT: JB notes that while electric cars are prevalent now, there is still a lot of work to be done. “We can’t pat ourselves in the back yet,” JB notes.

Dacia 15:52 PT: “Incredibly, there have been a lot of negative articles (about Tesla) in Bloomberg,” Elon observes in response to a shareholder’s concern about the myths and disinformation spread about Tesla. Elon seems to consider a mythbusting site to battle all the negativity.

Dacia 15:49 PT: “Customer testimony and referrals are the key to our sales,” Elon says about the company’s success.

Simon 15:47 PT: Shareholder question on what Tesla plans to do with the misinformation surrounding the company. Elon notes that the misconceptions are distressing, but even if Tesla provides explanations to mainstream media, these get buried in articles. Musk admits that he is at a little bit of a loss when it comes to changing the negative narrative about the company. Elon, Drew, and JB thank shareholders for being Tesla’s line of defense against the misinformation campaign.

Dacia 15:46 PT: On Tesla fires…Elon points out how rare Tesla incidents are, especially compared to gasoline-powered cars. “Internal…combustion…engine…it’s in the name,” he jokes. “Would you rather have a gasoline powered phone or a battery powered phone?” He also points out how ridiculous the disinformation campaign has been about Tesla fires.

Dacia 15:40 PT: Shareholder question on China’s EV growth – 500,000 units per year from Gigafactory 3 seems a little low? Why was the target set at that? Elon says he thinks that long-term G3 will do more, that’s more of an interim goal. He sees more factories in other parts of China.

Dacia 15:32 PT: “This might make sense…we will probably do something like this,” Elon agrees that a mobile ride sharing service should be make available prior to the Tesla Network/robo taxi release.

Simon 15:30 PT: As for Starlink tech being used for Tesla’s electric cars, Elon states that the company will need to design an updated antenna for the vehicles. Musk also notes that Starlink is not really for high-density areas as much. Instead, it’s designed to provide connectivity to the poorly served areas of the globe.

Dacia 15:28 PT: Elon says the Starlink antennae will be about the size of a small pizza. Like, are we talking Brooklyn style? What about pepperoni?

Simon 15:26 PT: Tesla insurance is coming soon, after a “small acquisition” is completed. Some software also needs to be written for the service.

Dacia 15:26 PT: “I’m often too optimistic about time frames,” Elon admits, referring to a submitted question about Enhanced Summon. It was predicted to be coming ‘soon’ a few times already. “There’s a lot of complexity in parking lots, turns out.”

Simon 15:23 PT: As for Maxwell tech, Elon says Tesla will save that for a “battery and powertrain investor day.” Sign us up!

Dacia 15:24 PT: “We’re not sitting idly by…we’re making all the moves to be the masters of our own destinies,” Drew adds to the battery/scaling challenges.

Dacia 15:23 PT: “We might get into the mining busines…maybe a little bit,” Elon teases, referring to battery scaling – Tesla’s biggest challenge right now. “Battery cells and full self-driving. Those are the two things that are most important,” Elon summarizes.

Simon 15:20 PT: Elon discusses Tesla’s “Cyberpunk” pickup truck. He notes that it is arguably the coolest vehicle he has seen so far. Seems like it is certain at this point that the Tesla Truck will not look like a conventional pickup.

Dacia 15:18 PT: “When you buy a car, you’re buying freedom. Freedom to travel,” Elon remarks, referring to all the inputs that go into Tesla ownership.

Dacia 15:13 PT: It’s all love for this Tesla leadership crew… nevermind Drew wasn’t introduced for a bit there. 🙂

Simon 15:11 PT: Can’t help but notice how relaxed Elon is today. Same thing with JB. They do, if any, exude confidence in today’s meeting.

Simon 15:08 PT: Elon shares the idea of having a Gigafactory on every continent. He also notes that the Solar Roof is now on “version 3.”

Dacia 15:08 PT: Version 3 of the Solar Roof…Elon predicts cost being equal to a shingle roof plus electric utility bill. Cheaper roof, better economics… Elon has “banged the table” over making this happen. “It can be done!” Drew chimes in.

Dacia 15:07 PT: Musk jokes that Gigafactory 3 needs air traffic control due to all the drones flying over and taking update pics. (we are guilty of indulging)

Simon 15:05 PT: JB and Elon express their thanks to everyone who helped create Gigafactory 1.

Simon 15:03 PT: Well look who we have here. JB Straubel’s in the house. There goes another bear thesis, I guess. JB also discusses the conceptualization and creation of Gigafactory 1.

Simon 15:02 PT: Model Y could have a lower drag coefficient than the Model 3. That is pretty darn impressive.

Dacia 15:00 PT: Buying any car besides a Tesla is like…”riding a horse and using a flip phone,” Elon says. Um, OK. Let’s roll with that visual. Memes…..go!

Dacia 14:56 PT: Musk speaks to all the factors lowering the cost of ownership of a Tesla over gas-powered competitors. Also…it’s designed to have the most fun with gems like the fart app. (er, he means emissions testing)

Simon 14:55 PT: Elon also highlights the cheaper maintenance costs of electric cars. It’s kinda like an Accord, he says, only better. It also has “gems” like the Fart App, “which is my personal favorite,” Elon added.

Dacia 14:53 PT: “No electric car has exceeded the range that we came out with on the first Model S in 2012,” Musk says smiling…still struggling not to tease competitors.

Simon 14:53 PT: Elon also notes that there is no “demand problem.” There goes the death throes of that bear thesis.

Dacia 14:52 PT: “E-tron…there’s room for improvement,” Musk says. He also is trying(?) not to pick on the brand who’s had some troubles lately.

Dacia 14:50 PT: “It’s remarkable that an electric car is the highest revenue car in the country,” Elon touts, and rightly so.

Simon 14:49 PT: Elon states that while the past year has been challenging, there are a lot of good news about Tesla. Starting off, the “Model 3 is outselling all of its competitors in the US,” says Elon Musk. He also thanks the hard work of the Tesla team.

Simon 14:40 PT: And now the votation starts. For background on this, please refer to our article on the agenda for today’s meeting.

Dacia 14:37 PT: “You need to have a certain amount of intestinal fortitude as an investor…and you have that in spades,” Denholm says. That’s for darn sure.

Simon 14:24 PT: Now all we need to know is if the red Model Y is separate from the blue one. Pretty cool if Tesla has two working prototypes right now.

Simon 14:10 PT: Kinda wondering if that red Y is just a wrapped version of the blue prototype from the unveiling. Sure looks like a working model imo. But that OEM chrome delete though.