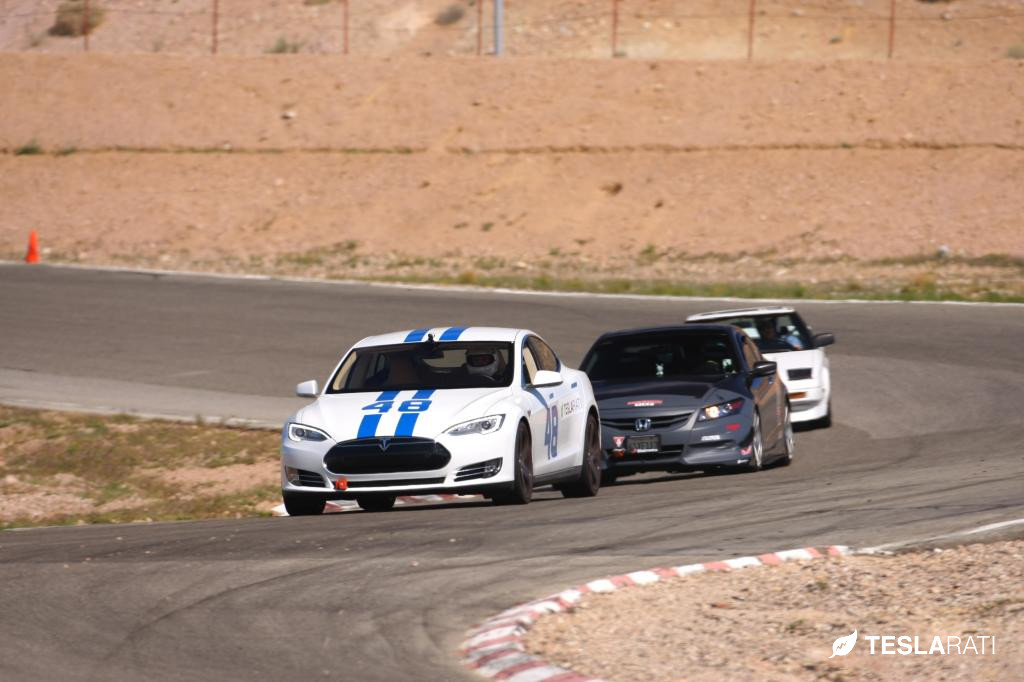 Willow Springs, also known as Big Willow, is a 2.5 mile long track in Rosamond, California touted as one of the fastest tracks on the west coast. The track has only 9 turns and really encourages triple digit speeds. The Model S is made for this track! We were the hit of the track and managed to grab the attention of the eGarage folks.  See their interview of TESLARATI here.

The 48 Tesla did exceptionally well, as the track allows for high enough speeds and has wide enough turns to perfectly fit the driving characteristics of the car. You can top it out at over 125 mph on the front stretch, leverage the car’s awesome acceleration capabilities while passing other cars, and also practice through several on and off camber turns. Power limitation kicks in within two laps, but because there is less overall speed changes compared to other tracks with frequent turns, power limitation effect is not as severe.

The track has plenty of opportunity for passing, and it’s a lot of fun. It has a good mix of high speed stretches and technical turns, and we liked almost every single segment of this track. Our G-Force Rival tires allowed for a slight degree of drift around the wide turns, which makes it for an extremely satisfying driving experience. While the track has no walls, there is a lot of gravel on the shoulders, and uneven shoulders in some area with small banks. The potential to damage the bottom of the Tesla is present especially if you happen to go off track at a high rate of speed.

The track consumed about 1030 wh/mile on average, which translates into about 4 rated miles for 1 actual mile driven, or approximately 10 rated miles per lap. The track has two 240V 50 amp outlets behind the garage building and they’re even kind enough to let you use them for free.

Tejon Ranch SuperCharger is 60 miles away and Hawthorne Supercharge is 95 miles away.
Our previous strategy of running half of the session before charging is working out well and lets us to compete in most sessions throughout the day.