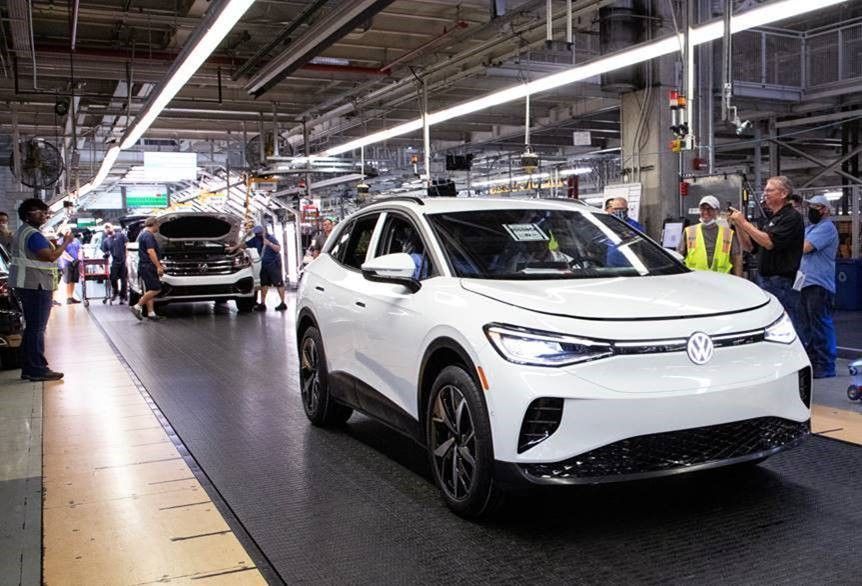 Volkswagen has launched pre-production of the new, all-electric ID.4 at its Chattanooga, Tennessee factory in the United States.

In 2020, Volkswagen officially launched the production of the ID.4 at its Zwickau, Germany plant, bringing in a new era of German automotive manufacturing for the electric crossover. Succeeding the ID.3 before it, the ID.4 was Volkswagen’s answer to the Tesla Model Y, the electric crossover that has become the Silicon Valley-based company’s most popular vehicle in a matter of 17 months.

Eventually available in China, Europe, and the United States, the ID.4 production lines in the U.S. have come alive as the German car company with a rich history of automotive spectacles narrows in on the first deliveries of the crossover, according to a recent LinkedIn post from VW America’s President and CEO Scott Keogh.

“While I was there to tour our electric vehicle expansion at the plant, I had the pleasure of watching a pre-production version of the VW ID.4 come down the line,” Keogh said. Broadening his experience, he said that the pre-production units would help eliminate future bottlenecks in the production process, especially as fully assembled U.S.-built ID.4 units will be ready for production in 2022. “This early model is a way for us to validate the build process, components, and procedures in advance of full assembly, which is scheduled to begin next year. Just as important, it represents our $800 million investment in EV assembly for the region – and our commitment to the high-tech jobs that will keep this facility humming,” he added.

The ID.4 has tremendous shoes to fill, especially if the goal of the vehicle is to compete with other all-electric crossovers that have become so widely popular in the U.S. automotive market. The Model Y and Ford’s Mustang Mach-E are performing extremely well and have very few complaints from owners. Ford started deliveries of its Mach-E GT Performance yesterday, rounding out its lineup of the electric Mustang less than a year after initial deliveries.