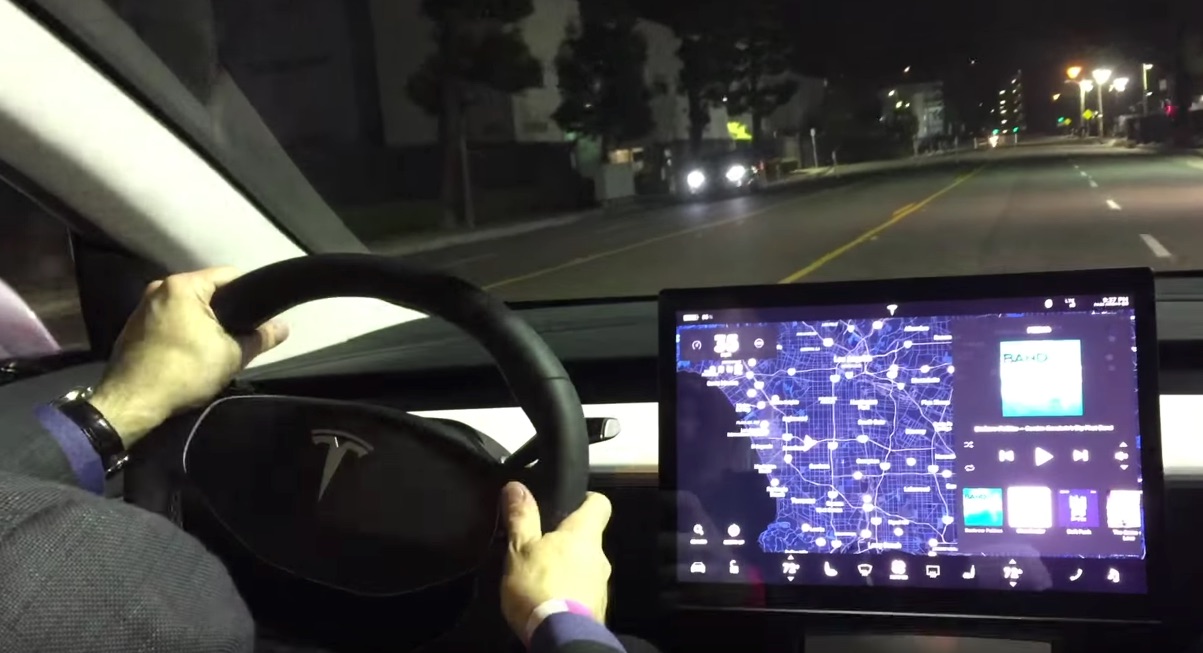 Why does the Model 3 have no instrument cluster? Maybe because the car is intended to be the fully autonomous self driving production vehicle.

The blogosphere is still buzzing about the Model 3 days after it was officially revealed to the public. A lot of that buzz is focused on the car’s interior, which features a dashboard with nothing attached except a 15″ horizontally mounted touchscreen. Is Tesla planning to add an instrument cluster similar to the ones found in the Model S and Model X before production begins?

Apparently not. Chris Zeigler, who covered the unveiling ceremony for The Verge, writes, “I was told by a Tesla staffer at last night’s event that the dash is essentially production-ready in its current state. In other words, the details may change, but the overall concept isn’t likely to change much; I would be shocked if a traditional instrument cluster magically sprouted between now and late 2017.”

What conclusion should we draw from the minimalist dashboard in the Model 3? It actually looks more like the inside of a Google bubble car than any conventional car you can think of. And that may be the biggest clue of all. Reddit user Red-Watcher may have figured it out first. He posted, “The Model 3’s lack of instrument cluster is a clear indication that the Model 3 itself was not necessarily designed to be driven, but rather designed for Tesla’s Autopilot technology to take the wheel.” He goes on to say, “I think the near complete absence of operator control displays is a logical move from Tesla because they fully anticipate their Autopilot technology to dominant the means of Model 3 operation by the car’s late 2017 rollout date. Elon Musk has repeatedly said that full autonomy is 2 years away, and that doesn’t seem to far fetched to me after seeing the progress made with the Model S and X Autopilot tech.”

Chris Zeigler agrees. “The remaining explanation, I believe, is the biggest one: the Model 3 is a self-driving car. [B]y completely dispensing of the driver-centric cockpit in the Model 3, Tesla is signaling that it wants you to sit back and ride.” Keep in mind that Elon said during the reveal that the Model 3 would have a full compliment of Autopilot sensors.

It was just a few months ago that Elon Musk was tweeting that Tesla was seeking software engineers to develop autonomous driving systems, calling it a “super high priority.”  At best, the first Model 3’s won’t be rolling off the assembly line until 18 months from now. That’s plenty of time for the company to further improve its autonomous driving capabilities.

By then, Tesla’s Autopilot equipped cars will have racked up a hundred million miles or more of near-autonomous driving, giving it perhaps the most advanced database of any manufacturer in the world. Why shouldn’t the Model 3 be the first self-driving production car?

There will need to be a lot of changes to existing state and federal laws before that prospect can become a reality. But Musk has said repeatedly that soon self driving cars will be as common as automatic elevators. Most of us just didn’t realize that “soon” would arrive this early.