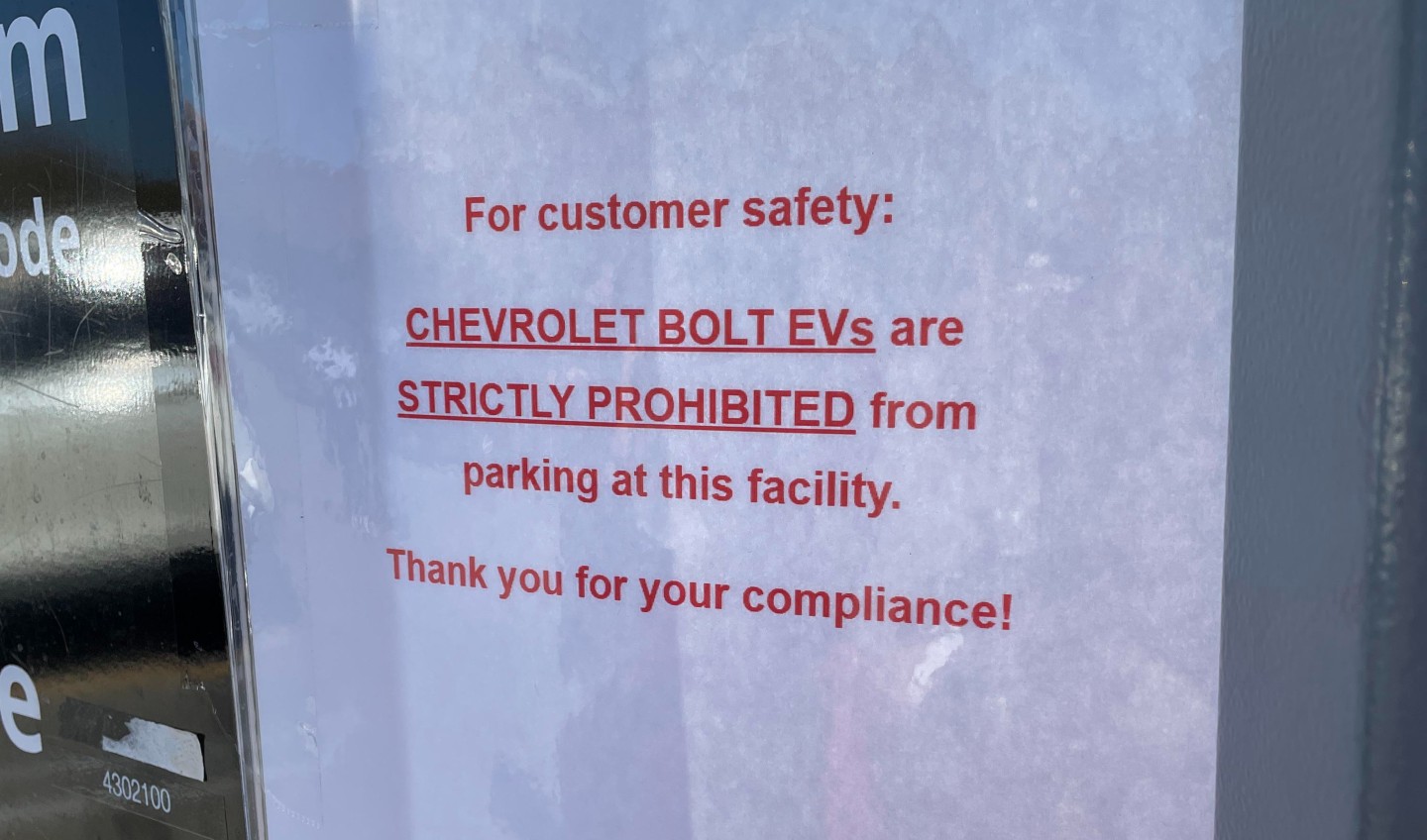 Chevrolet Bolt EVs have been in the news quite frequently as of late due to their extensive recall from General Motors due to battery cell malfunctions that could cause fires. However, a parking lot is taking precautions to an extreme measure by banning Bolt EVs from their facility due to the recalls, which have been heavily covered in the past few weeks.

The Bolt EV has had recalls three times over the past year due to battery issues. The first was in November 2020, with the second and third coming within the last several months after battery malfunctions in cells provided by LG Energy Solutions could have “the simultaneous presence of two rare manufacturing defects in the same battery cell.” GM’s second recall covered 69,000 vehicles total. Still, the company then decided to extend the recall by spending an additional billion dollars on other vehicles that were not listed in the initial recalls “out of an abundance of caution.” So far, GM has spent $1.8 billion on the recall since Q2.

GM encouraged owners to limit their state of charge to 90% and avoid depleting their battery below 70 miles of remaining range when possible. Additionally, owners were encouraged to park their vehicles outside after charging and not charge their cars overnight as a precaution.

Because of the mass amount of media attention the Bolt EV recall has received, some entities are now banning the vehicle’s presence on its premises. A parking lot in San Francisco is one example.

A sign was seen at the lot by Reddit user u/scarls13, who took a picture of the warning that read:

CHEVROLET BOLT EVs are STRICTLY PROHIBITED from parking at this facility.

Thank you for your compliance!”

The owner of the lot likely was taking a necessary and understandable precaution, but this sort of message could be detrimental to the development of electric vehicles. Just as media coverage fixates on instances of Tesla Autopilot irresponsibilities, EV fires, and commonly spread misinformation regarding EVs in general, the Bolt EV story has become a mainstay of fear for those who are still skeptical of the EV movement. It is important to remember that GM, Chevrolet, and LG Energy Solutions have taken drastic steps to fix the issue, even recalling non-effected vehicles to have battery packs replaced to prevent further events of combustion.

Statistically, EV fires are not a common occurrence. FEMA stated that 171,500 vehicle fires occurred annually on average between 2014 and 2016. Only 10 of these fires were Bolts, and ICE vehicles made up a vast majority of the vehicles that caught fire. The 269 million vehicles on the road in the U.S. in 2016 and one in 1,569 fossil fuel-powered vehicles caught fire during that time. Furthermore, there were 1.2 million EVs in China in 2018, but one in 30,000 vehicles caught fire. This effectively means that an ICE vehicle was twenty-times more likely to catch fire than an EV, according to Forbes.

Of course, it is understandable to be preventative and safe, but the Bolt EV fires are still a statistically rare occurrence. GM admitting its wrongs and pushing toward full replacements of battery cells to prevent future instances of fires should begin to take control of signs like the ones above, but lot owners are within their rights to refuse service to anyone for any reason.