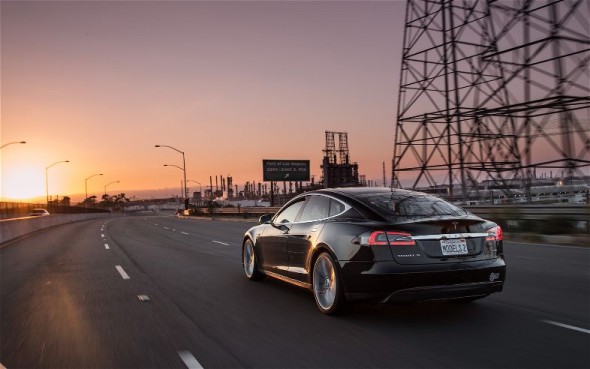 Built from the ground up as an EV, this car’s overall balance benefits from mounting the battery under the floor and in the lowest part of the body. That gives the car a rock-bottom center of gravity that enables excellent handling, a comfortable ride, and lots of room inside. Plus, it has a front trunk where other cars’ gasoline engines would be, in addition to its large rear cargo space. This big luxury hatchback even seats seven, with its optional third-row jump seat.

Inside, the car looks like something Marty McFly might have brought “back from the future” in place of his iconic fusion-powered DeLorean. A giant 17-inch touch screen glows in the center of the dashboard, controlling everything from high-res Google Earth maps to opening the sunroof, setting the responsiveness of the regenerative brakes, and adjusting the suspension ride height. In all, the Model S worked better than we expected—especially being the first home-grown model from a brand-new car company.

The Tesla Model S – the electric car that shatters every myth.

The electric motor delivers impressive power, right now, and it is impressively efficient. The Model S uses about half the energy of a Toyota Prius every mile, and it has more than twice the range—about 200 miles—of any other electric car we’ve driven. Still, you’ll have to plan ahead for longer trips; you won’t be taking it on a spontaneous jaunt from, say, New York to Cleveland any time soon. You won’t make it. Even with Tesla’s optional High Power Wall Connector, it takes about five hours to charge. On a standard 240-volt electric-car charger, it would take about 12 hours.

Tesla does provide some ability to make long trips in the Model S- as long as they’re the right trips. Up and down California, from Los Angeles to Las Vegas, and between Boston and Washington, D.C., the company has set up a network of Supercharging stations—with free electricity—that can refill the battery halfway in a half hour. (To charge more than that at such speed takes longer and would damage the battery.)

All this comes at a price. We paid $89,650 for our Model S, with the biggest available battery, the most seats available, and the fastest available optional chargers. Then we still had to pay another $1,200 for Tesla’s High Power Wall Connector. But operating costs are a little more than half that of a frugal Prius.

So is the Tesla Model S the best car ever? We wrestled with that question long and hard. It comes close. And if your needs are confined to the Tesla’s driving range, it just may be. But for many people, the very thing that makes cars great is the ability to jump in and drive wherever you want on the map at a moment’s notice. And on that measure the Tesla has its limitations. So the Model S may not satisfy every conceivable need, but as we’ve learned through our testing and living with it, the Model S is truly a remarkable car.

We couldn’t resist having some fun in the luxury electric sedan. In the process, we answered the seminal question: Will it drift? Drifting can be a measure of a car’s great-handling chops, as well as its available power.And boy, can the Tesla drift as you can see in our video.

Read our complete road test for more details, and check the Ratings to see how it compares to other luxury cars and electric cars.