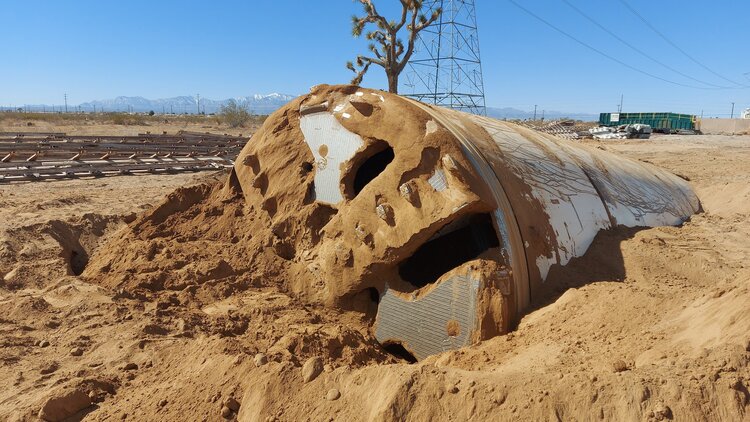 TBC enthusiast @BoringPrufrock shared photos of the tunneling company’s newest TBM setup in a construction site north of the Las Vegas Convention Center (LVCC) Loop’s Station 3. This site included new TBM that is quite different from Godot+, which was used for the LVCC Loop.

Earlier this year, The Boring Company revamped its website. The update revealed some new details about the tunneling company, including its new flagship boring machine.

There is one distinct difference between TBC’s previous tunneling machine, Godot+, and the new TBM. Prufrock was designed to “porpoise,” allowing it to launch directly from the surface and right out of the ground.

Prufrock breaks through the surface ground at an angle, as shown in the graphic below. One of the photos recently shared of a Boring Company TBM shows the machine pointed at an angle, hinting that it is a Prufrock machine in the picture.

“Prufrock is designed to tunnel at a speed greater than 1 mile per week, which is 6 times faster than The Boring Company’s previous generation TBM (Godot+). This is still 4-5 times slower than a garden snail…but Prufrock is catching up!” noted TBC on its website.

Prufrock would be an instrumental piece of machinery for TBC’s Vegas Loop, the tunneling company’s second—more extensive—underground transit system in Las Vegas. The Vegas Loop will be connected to the LVCC Loop. It will include stops in notable places in the city, including The Strip, Allegiant Stadium, McCarran International Airport, as well as some resorts and casinos.