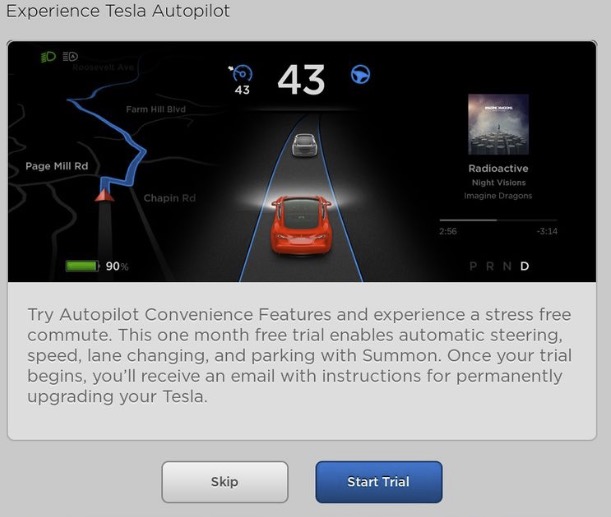 When Tesla revealed that Model S 70 owners with the 70 kWh battery could in fact unlock an extra 5 kWh for a fee bringing it to a total of 75 kWh, it sent the rest of the auto industry a loud and clear message that the company can and will continue to streamline ways to continuously improve upon its vehicles via over the air updates. It wasn’t the first time Tesla has done this and it certainly won’t be the last. Let’s look at what some of these ‘unlockable’ features are. There have been some debates online about whether or not it makes sense to do the upgrade.

Some argue that they can “use” the bigger battery to offset long term battery degradation and enjoy the benefit at no extra cost. While it’s probably true that the larger battery will degrade even less, Tesla’s battery degradation over time is very slight. At over 60,000 miles I’ve only lost 5% of battery range which is roughly 13 miles of rated range – a negligible amount for me. Sure it would be nice to 5 kWh of extra battery, but at the end of the day the increase in range from the upgrade is relatively immaterial.

Tesla has priced this upgrade after delivery at $3,250 US, and $3,000 if you select the larger battery at the time of ordering the car. This means the battery upgrade is being priced at $650/kWh.

The base Model 70D has a range of 240 miles. The Model 75D has a range of 259 miles, 19 miles or 8% extra range from the upgrade. Another way of looking at the price is that it costs $171/mile of range. Here again I’d make the argument that most people will find an extra 19 miles pretty insignificant. There of course will be a few owners that absolutely must have the extra 19 miles, but for most the upgrade won’t make sense. Note that the 70D and 75D both Supercharge slower than the 85D and 90D cars — if you also got a boost in charging speed from the upgrade perhaps it would be more valuable.

So, why am I a fan of Tesla offering unlockable software features like this? The reason is that it allows Tesla to simplify their manufacturing and production process by creating a single version of the vehicle, while allowing the company to also roll out better functionality over time through over-the-air updates initiated by in-car purchases. Tesla is essentially creating micro-transactions with each of its upgradeable features.

I feel that the transition from 70D to 75D was was nicely executed, and it’s evident that Tesla continues to lay the foundation for a future where new hardware and new features can be gracefully introduced, while keeping recent buyers happy that they didn’t “miss out” on the latest and greatest.

Even before the 75D battery upgrade was introduced, Tesla had already begun including Autopilot hardware on all Model S even before the Autopilot suite of functionality was even available.

Today you can buy a Tesla with or without autopilot functionality (the feature is $2,500 when you buy the car, but $3,000 as a retrofit after delivery), however all cars from September 2014 and onwards have the hardware for Autopilot.

Tesla recently offered a free 30 day trial of Autopilot to owners that opted out of purchasing the optional feature as a way to encourage them to experience the new technology. But ultimately it hopes that these owners will pay to upgrade. Here again Tesla is fronting the costs of Autopilot hardware and making the bet that most owners will purchase the feature once they had a chance to experience it.

One such Model S owner describes his first experience with Autopilot through the trial offer. Back in the early days when the Model S was first introduced, Supercharging wasn’t enabled on all vehicles. Owners had to pay extra to receive Supercharging hardware either at the time of ordering their car or as a retrofit later on. Even to this day older Tesla Model S 60 models can enable Supercharging through the company’s online store. Tesla also offered a 40kWh battery version of the Model S to help Tesla make good on a promise that the base price would start at $50,000. With “only” 160 miles of rated range, the 40kWh version wasn’t very popular. To improve production efficiencies, Tesla in reality built 60 kWh versions of the car and software limited it to 40kWh. The price to upgrade from 40 kWh to a 60 kWh back then was a whopping $11,000 upgrade. But even at that price the cost per kWh was $550/kWh making it $100 lower per kWh than what they’re currently on the 70D to 75D upgrade.

I fully support Tesla’s strategy of reducing the number of permutations its manufacturing line has to deal with. I also like the idea of encouraging secondary transactions and allowing people to upgrade their cars after they take delivery. Their whole approach gives Tesla a lot of flexibility with improving the vehicle over time, and allows buyers – whether money constrained, or they just don’t need an option – to delay the purchase of features until a later time when it suits their needs.

I wonder why some features like Premium Sound and XM radio haven’t gone the same route as I have to imagine the incremental costs of the hardware for those options are a lot smaller than those for autopilot or Supercharging.

I do believe, however, that the after-delivery pricing of some of these options may come down over time. Tesla has sunk costs in the hardware. If the owners don’t upgrade in year 1, why shouldn’t Tesla lower the price in year 2? Tesla stands to make no money back on their investment in the individual cars if they can’t get people to upgrade, so why not lower prices over time? While it may seem like they’re devaluing the feature, there is a strong motivation for the owner to pay sooner rather than later in order to get more years of enjoyment and use of the feature. Just as the car’s value declines over time, so should that of the features.