Google Maps has updated its system recently to determine the best route of travel for electric vehicles, a worthy addition to the app as EVs become more popular.

According to Ars Technica, a recent Google Maps update will allow EV drivers to find the most efficient route wherever they want to go. The feature was not previously available because of the differences in efficiency calculations between gas and electric vehicles. The program incorporates algorithms designed with help from the National Renewable Energy Lab and can help drivers minimize their environmental impact.

For over a year now, Google Maps has offered drivers the ability to find the most efficient route to travel to save gas (and only gas). After plugging in a destination, the app would place a leaf icon next to a route that represents the most fuel-efficient way to travel. According to Google’s help desk, the software uses factors such as average fuel consumption in given regions, steepness and regularity of hills, stop-and-go traffic patterns, and types of roadways to find the most efficient path. However, gas and electric vehicles are far different in when and how they are efficient. 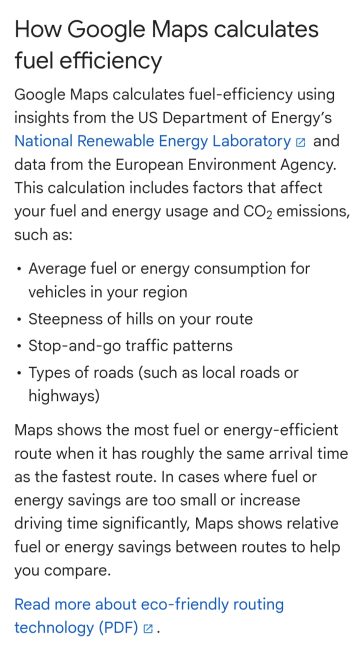 Gas vehicles are more efficient at highway speeds than at lower stop-and-go speeds. This concerns the nature of internal combustion engines, their heat efficiency, and the fact that slower speeds generally mean more stops and starts that require the vehicle to use far more gas than continuously stable speeds. Electric vehicles operate the opposite way; the faster they go, the more energy they use. This difference has previously prevented EVs from receiving accurate, efficient route calculations.

However, the program will now account for these differences via a recent Google Maps update and find the most efficient path for electric vehicles.

When you open the app, tap your account picture in the top right, settings, then navigation settings. As you scroll down, you will be given the option to “prefer efficient routes” and select your engine type, under which you can pick from gas/diesel, hybrid, or electric. 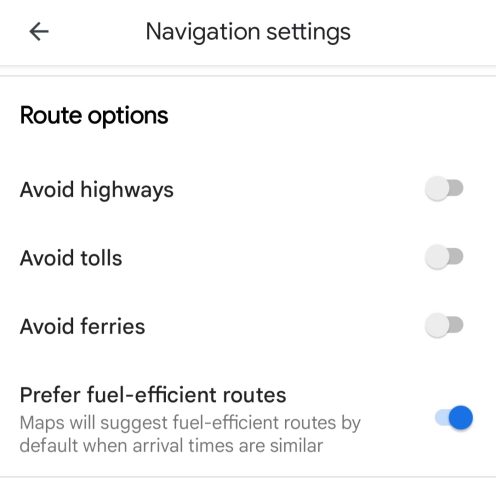 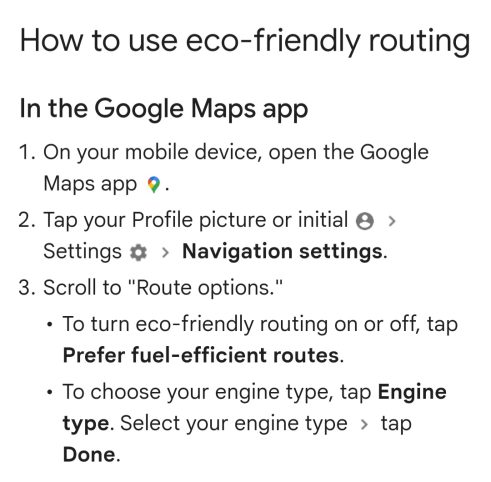 After making the necessary selections, when you select your next destination, you will see a green leaf label next to the most efficient route. If you tap to see more details about your route at the bottom of the screen, you can see how much more efficient the app believes your route will be.

For the more tech-savvy, many have already heard of “A Better Route Planner.” While their technology of allowing you to select your specific vehicle still beats out Google’s offering, Google Maps isn’t far from the routes I tested and generally offered a more polished experience and a more extensive feature set.

This update will be fantastic for those who are just getting their first electric vehicle and would like to maximize their range quickly and easily, and even those who want a no-fuss solution to EV route planning. But hopefully, this indicates that more EV functionality will soon be coming to Google Maps.