While the massive dust storm currently enveloping Mars continues to force the 14-year-old Opportunity Rover into silence, NASA’s other Martian missions are watching the spectacle at the Red Planet’s surface unfold from a distance.

NASA’s Opportunity Rover was situated on the slopes of Perseverance Valley when it the dust storm hit last June. As the storm broke out, NASA decided to keep the rover’s arm deployed on its rock target, dubbed as La Joya. As of mid-June, the dust storm covered 15.8 million square miles (41 million square kilometers), and it was so intense that it became impossible for Opportunity to recharge its batteries through its solar panels. The last power reading from Opportunity was recorded on Sol 5111 (June 10, 2018), when the veteran rover collected a measly 22 Wh of solar energy from the Sun. Since then, Opportunity has been silent.

NASA believes that Opportunity has put itself in hibernation, with the rover shutting down all of its systems except its mission clock. In a later statement, Dr. James Rice, co-investigator and geology team leader on NASA projects including Opportunity, noted that the timing of the Martian dust storm could actually work in Opportunity’s favor. The current storm on the Red Planet formed during the Martian Spring, which would likely help keep the rover’s electronics from becoming too cold during nights. Earlier this month, NASA Mars Exploration Program director Jim Watzin stated that the massive dust storm was already peaking. Nevertheless, according to a statement from NASA officials last Wednesday, it could take a long time before the dust in the Red Planet’s air clears properly. 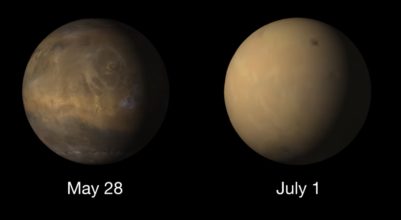 Before and after images of the Mars dust storm (Photo: NASA/JPL)

“Based on the longevity of a 2001 global storm, NASA scientists estimate it may be early September before the haze has cleared enough for Opportunity to power up and call home,” NASA officials wrote.

As Opportunity’s team continues to wait for the dust to settle, other Martian missions are on overdrive studying the remarkable dust storm from a distance. The nuclear-powered Curiosity Rover, for one, is currently analyzing how the dust storm evolves over time from Mars’ surface. Ashwin Vasavada, a scientist from NASA’s Jet Propulsion Laboratory (JPL) in Pasadena, California, who currently works with the Curiosity mission, stated that they are working “double-duty.”

“We’re working double-duty right now. Our newly recommissioned drill is acquiring a fresh rock sample. But we are also using instruments to study how the dust storm evolves,” the scientist said.

From above, NASA’s orbiters are intently studying the storm. Researchers are now utilizing the THEMIS (Thermal Emission Imaging System) instrument aboard NASA’s Mars Odyssey to monitor the temperatures on the surface and the atmosphere on the planet. The orbiter is also studying the dust loads in the air. The Mars Reconnaissance Orbiter (MRO), which was the first orbiter to spot the storm last June, is tracking the evolution of the storm and how it affects the planet’s atmospheric pressures. Furthermore, the Mars Atmosphere and Volatile Evolution orbiter (MAVEN) is analyzing dust storm particles from higher up, right at the point where Mars’ air meets space. MAVEN’s analysis could potentially provide clues as to how Mars seemingly lost its once-thick atmosphere.

In a way, all the instruments pointed at the dust storm on Mars’ surface today are almost poetic. While Opportunity continues to fight for its survival in the darkness of the storm, its siblings, both on the ground and in orbit, are giving the impression that the 14-year veteran rover is not really alone.