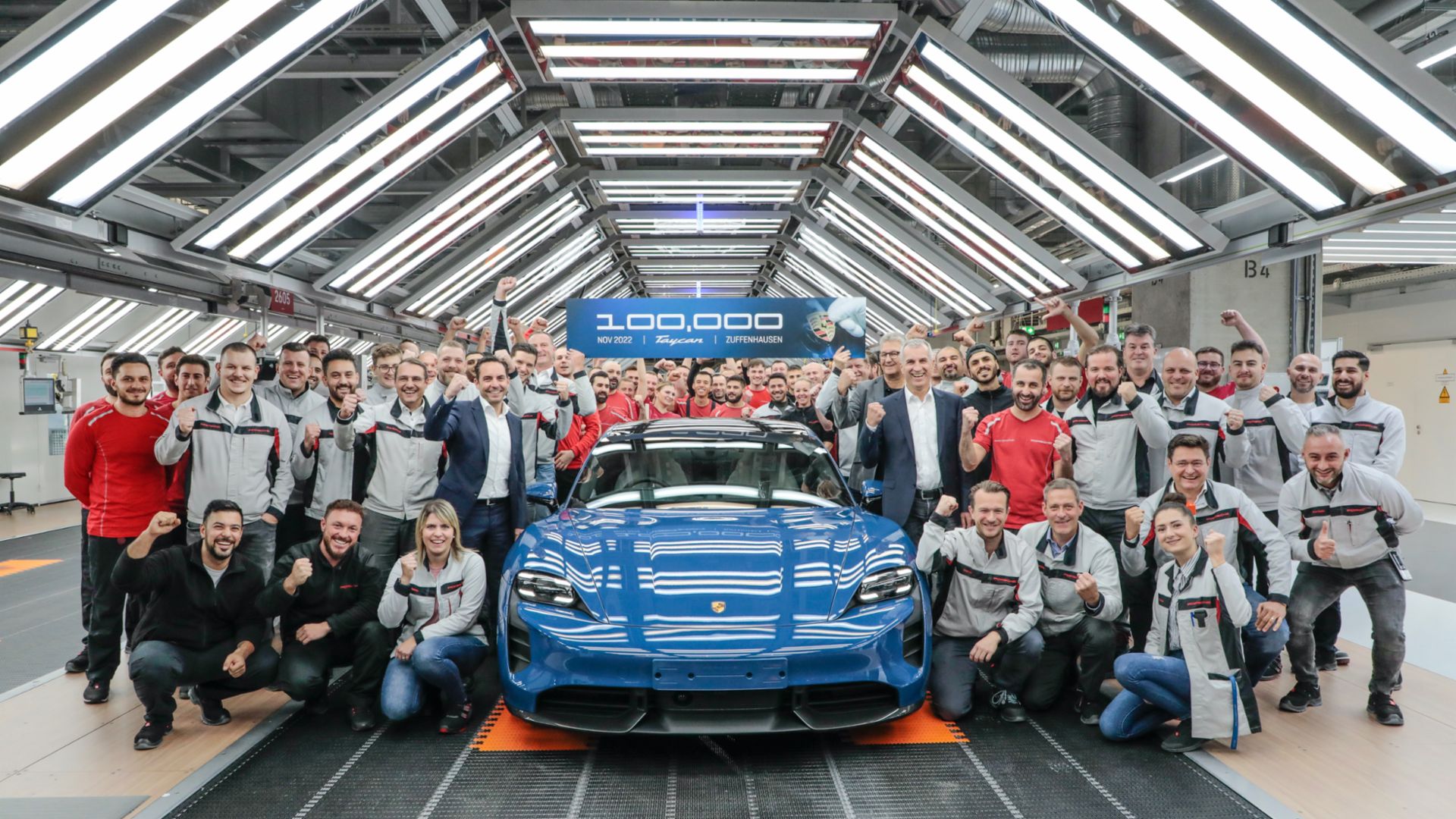 Porsche announced today that the company has produced its 100,000th Porsche Taycan since the vehicle’s launch.

The 100,000th Porsche Taycan, a Neptune Blue Taycan Turbo S headed to the U.K., marks a significant achievement in manufacturing for the vehicle and a dramatic shift in Porsche’s philosophy. The Taycan has shown that even the most motorsport and enthusiast-focused brand on the planet, Porsche, can create an electric vehicle that its diehard fans have come to embrace and enjoy.

Porsche Taycan production began in 2019 at Porsche’s Zuffenhausen plant, a facility that continues to be the primary source of Taycans. And for a luxury vehicle, the 100,000-unit landmark is significant, especially with a line as diverse as the Taycan. Porsche has expanded their Taycan offerings with three body styles; the Sport Sedan, the Sport Turismo (hatchback), and the Cross Tourismo (hatchback). The Taycan also has five drivetrain options, further expanding customer options.

Fans did not initially embrace the Porsche Taycan. Some were hesitant to even consider an electric sportscar, especially from a brand that has been so dedicated to automotive enthusiasm; was the Taycan an abandonment of those ideals? It turns out that this is far from the case. Porsche has pushed their first electric vehicle to peak performance, even going as far as to battle with the Tesla Model S Plaid for the fastest EV on the Nurburgring. With this dedication to the new platform, Porsche has shown fans that electric vehicles can not only be the “eco-friendly” option, but they can be the choice for enthusiasts as well.

Porsche highlighted the enthusiasm from fans in their press release, speaking with owners now nearing 200,000 kilometers in under two years of ownership. The reaction from owners was universal; they loved the vehicle’s refinement, reliability, and performance, regardless of its electric drivetrain.

Porsche’s press release is optimistic, but it leads to an essential question for the brand; what’s next? Will the iconic brand continue to grow its electric vehicle offerings? If recent photography is to be believed, Porsche will likely be introducing yet another Taycan trim (perhaps a GT/GT4), but the brand has other products in the works as well. The German sports car titan has shown off prototype track vehicles based on the 911 at Goodwood, and countless rumors have circulated regarding an electric Macan offering. Here’s to hoping for more exciting electric Porsche offerings sooner rather than later.