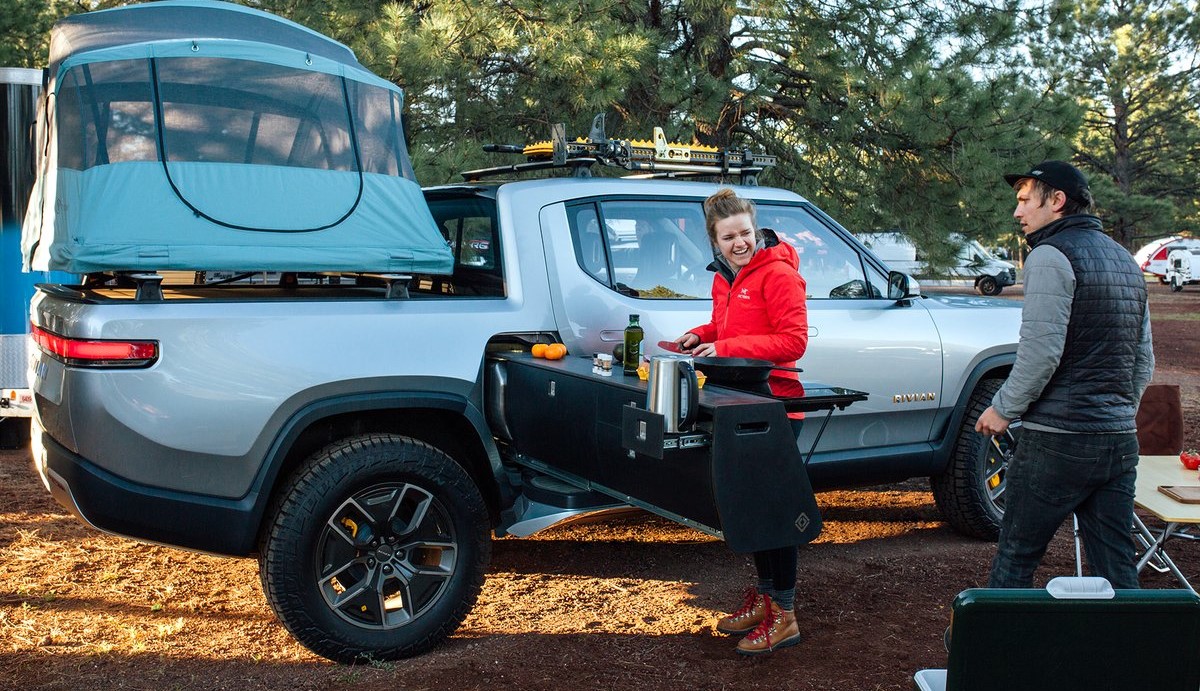 Rivian has been on the move with publicity efforts surrounding a specialized kitchen set designed for their R1T truck’s gear tunnel that was unveiled at this year’s Overland Expo West in Flagstaff, Arizona. Several posts focused on the accessory have been published online recently to help jog potential customers’ imaginations and perhaps inspire a trip or two of their own with food at the forefront. It’s not just an idea being used as a photo prop, either. Rivian has confirmed the kitchen set will be available for sale when its R1T truck and R1S SUV are also hitting the market.

Shortly following the kitchen prototype’s debut, Rivian sent two company team members out on a Memorial Day overland trip to Sedona with the R1T wherein the portable dining station was put to use in the real world. Photos from the journey were subsequently shared via Rivian’s official social media, complete with Arizona’s red dirt and incredible mountain landscape in view. It’s probably safe to say the promo was successful in convincing audiences that the gear tunnel kitchen is a pretty cool accessory to have.

The R1T’s retractable kitchen includes two induction burners, cookware, utensils, and a sink with 5 gallons of water storage to both prep meals with and wash dishes. As demonstrated by Rivian’s Memorial Day road trippers, a ready-made way to cook up onions and peppers to enjoy with avocado and a desert sunrise definitely looks to be a scene that most of Rivian’s primary audience would enjoy. Overall, it’s a creative and convenient way to really tap into all the extra space Rivian’s flagship truck has to offer.

The debut of the kitchen accessory at an event like the Overland Expo makes sense for Rivian’s brand as well as an overland trip with the set itself. After all, overlanders are a creative bunch that embrace all the vehicle-supported living concepts they can imagine to get the most out of their travel experiences, and Rivian is promoting an electric adventure lifestyle in its product development and marketing. The company has also noted that the Overland Expo inspired its vehicle designs, and team members have attended prior expos to help fine tune their products to what future owners would be looking for.

Rivian’s gear tunnel itself gets a lot of coverage these days, and rightly so. Since the R1T doesn’t need to make room for all the extra parts needed for gas and diesel-powered engines, there’s tons of extra space for cargo, and a storage area separate from the truck bed provides the best of both traditional worlds for backend vehicle storage. The bed is great for hauling, as expected, and the gear tunnel is great as a “regular” trunk for things that are better suited to a more contained environment. The added convenience of using the gear tunnel’s door as a seat or stool is a bonus, and a significant one at that.

With the debut of the portable kitchen set, it looks like the Michigan-based startup has decided to tap into gear tunnel enthusiasm in the form of an add-on available direct from the factory. Albeit, with as creative as Rivian’s designs seem to be already, the aftermarket will probably fill up with numerous crazy and/or useful concepts that might be difficult to even imagine right now.

As Rivian’s brand expands, so will its loyalty and audience seeking custom parts and accessories, something that other auto makers with similar marketing focuses like Jeep have fostered over the years. Considering the highly visual and product-centric marketing efforts Rivian has already undertaken, a bright future of inspired utilization definitely looks to be ahead.