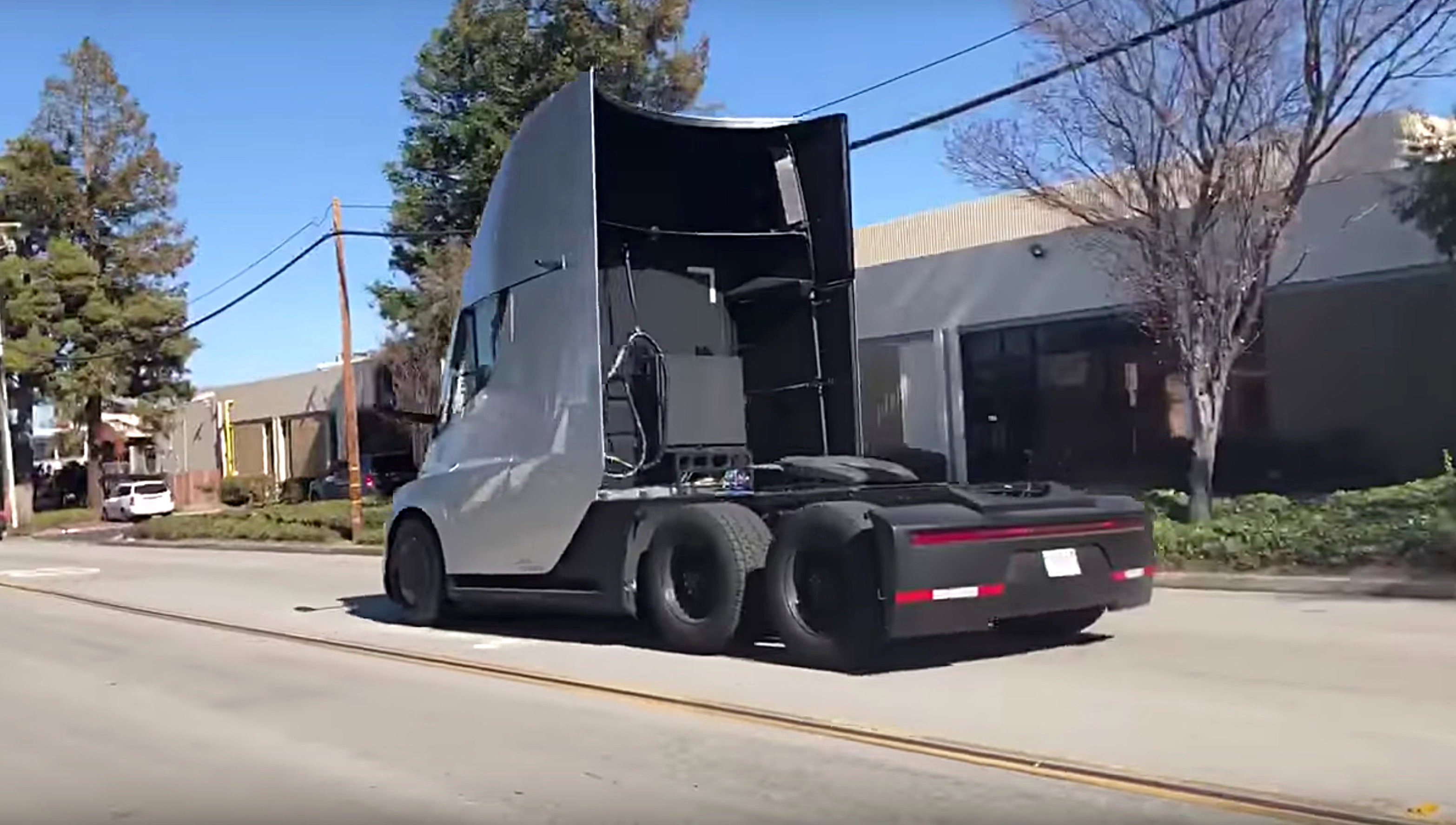 A silver Tesla Semi prototype was recently filmed showing off its impressive acceleration on a public road. While the clip featuring the all-electric truck only lasted for a few seconds, the sound and acceleration of the Semi truck’s four electric motors were unmistakable.

The recent Tesla Semi sighting was uploaded by Richard Fielder, who was able to capture the electric truck cruising  From what could be seen in the YouTube video, the vehicle in question appeared to be the 500-mile-range Tesla Semi prototype with a higher roof configuration featured in last year’s event. Just like the matte black Tesla Semi, with a 300-mile range, that was spotted last month, the long-range Semi was equipped with a standard set of side mirrors — mandated accessories which were absent on the long-hauler during its unveiling last year.

Inasmuch as the recent Semi sighting in itself was remarkable, however, what truly stood out in the brief clip was the acceleration of the massive electric truck. During the first seconds of the clip, the Tesla Semi appeared to be cruising at a steady speed. A few seconds after that, however, the driver of the electric truck appeared like he floored the accelerator, launching the massive truck forward at a speed that is reminiscent of the Ludicrous Mode launches of its smaller siblings, the Model S and X. The unmistakable, electric whine of the vehicle’s four Model 3-derived electric motors was also very audible.

The exact location where the sighting took place was not shared by Fielder, although it appears to be in the same commercial area between Tesla’s Palo Alto headquarters and the Fremont factory where the matte black Tesla Semi that was also recently spotted.

The Tesla Semi is Tesla’s largest offering in its current lineup of vehicles. Being a Class 8 semi-trailer, the electric truck is capable of towing up to 80,000 pounds of cargo without compromising its speed and performance. With four electric motors that operate independently, the Tesla Semi is capable of accelerating from 0-60 mph in just 5 seconds without cargo. With a full load, the Semi is still capable of hitting 60 mph in 20 seconds, several factors quicker than any diesel semi-trailer on the market.

Ahead of Tesla Semi’s 2019 slated production timeline, Tesla enthusiasts now have a chance to experience the Semi’s power firsthand. As we stated in a previous report, Tesla’s updated Referral Program has a new incentive for Model S and Model X owners, with the person who can get the most number of friends to sign up for the company’s newsletter getting an opportunity to race the Semi around the company’s test track in Fremont.

Here’s the Tesla Semi in action: