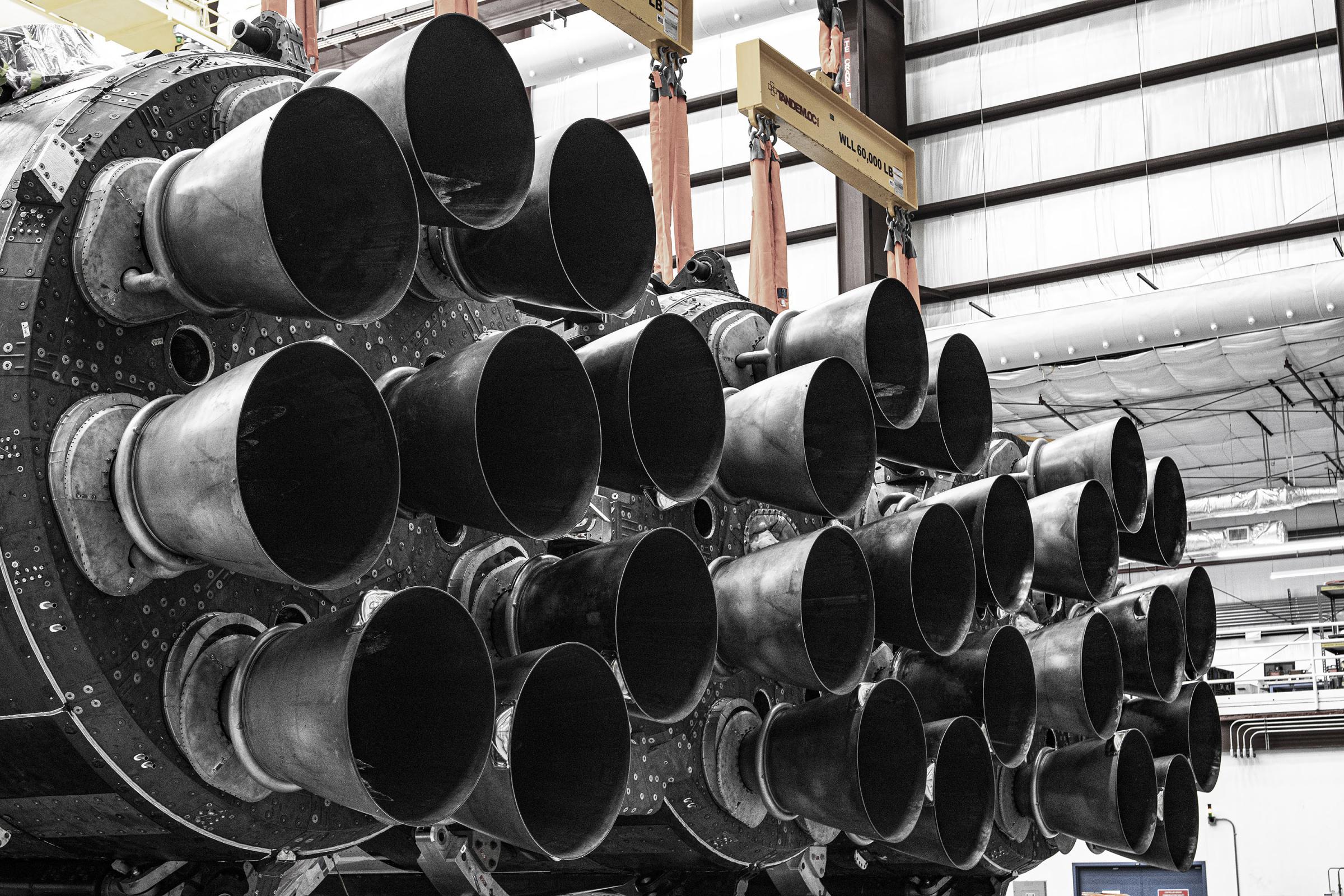 SpaceX has assembled the fourth Falcon Heavy for the rocket’s first launch in 40 months.

A photo shared by SpaceX on October 23rd shows that it has mated Falcon Heavy’s three first stage boosters together while preparing for prelaunch testing. Simultaneously, workers have completed the equally important task of converting 39A’s transporter/erector (T/E), which has been configured for single-core Falcon 9 rockets for over three years.

The transporter/erectors SpaceX use for all Falcon launches are a bit like a mobile backbone and launch tower combined. Their first purpose is to transport horizontal Falcon rockets to and from their integration hangars and launch pads. They’re also tasked with raising Falcon rockets vertical and lowering them back down for transport or worker access. Most importantly, they connect to a pad’s ground systems and distribute propellant, gases, power, and communications to Falcon 9 and Falcon Heavy through multiple umbilicals and quick-disconnect ports.

Falcon Heavy, which can only be launched out of LC-39A, has three times as many boosters as Falcon 9 and necessitates significant modifications to the pad’s T/E when switching between the two. The process is much harder when moving from F9 to FH, and waiting almost three and a half years between Falcon Heavy launches likely hasn’t made the conversion any easier. But on October 23rd, after numerous tests and weeks of work, the Pad 39A T/E picked up the ‘reaction frame’ that attaches to the bottom of Falcon rockets and was brought horizontal.

Thanks to the nature of Falcon Heavy and Pad 39A’s infrastructure, what happens next is more or less guaranteed. During normal Falcon 9 operations, 39A’s integration hangar is large enough for two or three unrelated Falcon boosters to remain while the T/E rolls inside to pick up a full Falcon 9. More importantly, Falcon 9’s booster and upper stage can technically be integrated off to the side and craned onto the T/E when ready. But with Falcon Heavy, which has a first stage akin to three Falcon 9 boosters sitting side by side, there isn’t enough room inside the hangar to integrate the rocket with the T/E inside.

For Falcon Heavy, the T/E can thus only roll back into the hangar once the rocket’s three boosters and upper stage have been fully assembled and are suspended in mid-air. SpaceX’s October 23rd photo shows that three of the four cranes required for that lift appear to already be in position, further confirming that T/E rollback is imminent. Once the T/E rolls back to the hangar and Falcon Heavy is attached, the rocket will eventually be transported to the pad and brought vertical for wet dress rehearsal (WDR) and static fire testing.

The US Space Force’s USSF-44 payload – a mysterious pair of satellites that are more than two years behind schedule – will almost certainly not be installed on Falcon Heavy during prelaunch testing, so the rocket will need to roll back to the hangar at least one more time after testing to have its payload fairing attached.

Combined, that prelaunch process could easily take a week or more. Multiple sources report that Falcon Heavy is scheduled to launch no earlier than (NET) 9:44 am EDT (13:44 UTC) on Halloween, October 31st. But even if the rocket rolls out today (Oct 24), the odds are stacked against Falcon Heavy sailing through its first integrated prelaunch tests in 40 months, and delays are likely.

For Falcon Heavy’s fourth launch, all three of the rocket’s boosters – B1064, B1065, and B1066 – are new, as are its upper stage and payload fairing. An FCC permit for the launch has confirmed that SpaceX will intentionally expend the rocket’s new center core while its twin side boosters will attempt a near-simultaneous landing back at Cape Canaveral. USSF-44 will be SpaceX’s first attempted launch directly to geostationary orbit (GEO), an exceptionally challenging mission that requires the rocket’s upper stage to coast in space for around 4-6 hours between two major burns.

If successful, Falcon Heavy will insert the USSF-44’s mystery satellites into a circular orbit ~35,600 kilometers (~22,150 mi) above Earth’s surface. At that altitude, orbital velocity matches Earth’s rotation and spacecraft can effectively hover – indefinitely – above their region of choice.

Falcon Heavy is the most powerful operational rocket in the world. At liftoff, it weighs around 1420 tons (~3.1M lb) and can produce more than 2300 tons (~5.1M lbf) of thrust. In a fully expendable configuration, Falcon Heavy can launch 26.7 tons (59,000 lb) to an elliptical geostationary transfer orbit and 63.8 tons (141,000 lb) to low Earth orbit. SpaceX doesn’t advertise its direct-to-GEO capabilities.