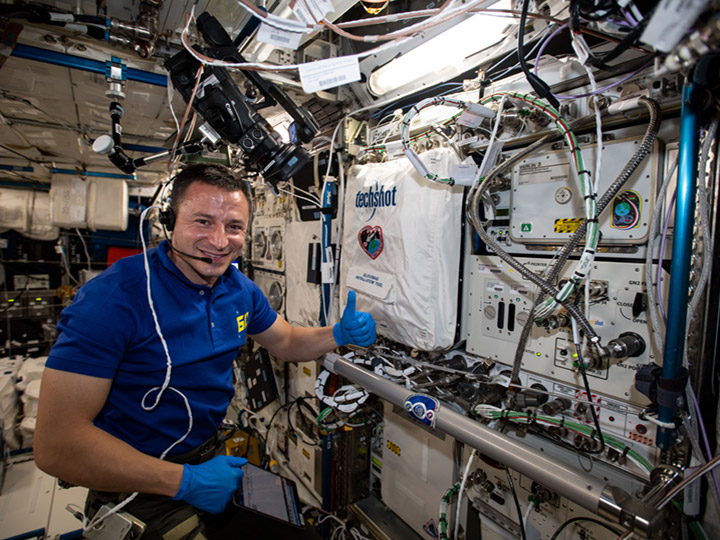 NASA astronaut Drew Morgan set up the bioprinter on the ISS. Credit: NASA

Two high-tech companies have teamed up to take 3D printing in space to the next level. A new 3D printer, sent to the space station on a SpaceX cargo resupply mission last July, is now officially open for business. It’s goal: to print human tissue in space.

Formally known as the 3D BioFabrication Facility (or BFF), the printer will use adult human cells (like stem cells) as its feedstock.  The BFF is just the first step to a much larger goal of printing human organs — such as hearts or lungs — in space.

“The initial phase for BFF, which could last about two years, will involve creating test prints of cardiac-like tissue of increasing thickness,” Techshot representatives said in a statement. (Techshot is collaborating on the project with nScrypt, a 3D bioprinter and electronic printer manufacturer.)

If all goes according to plan, the company would then graduate to printing heart patches in space. Once printed, they would be shipped back to Earth and tested in small animals (such as rats) to see how they do. The next step after that could be entire organs.

“Ultimately, long-term success of BFF could lead to reducing the current shortage of donor organs and eliminate the requirement that someone must first die in order for another person to receive a new heart, other organ or tissue,” Techshot said.

Imagine needing a organ and instead of having to wait on the transplant list for an one that could never come, using a bit of your own DNA, a new organ could be printed for you in space.

Researchers on Earth have celebrated some success with the 3D printing of bones and cartilage, but when it comes to soft tissues, they haven’t had the same luck.

Tissues collapse under their own weight due to gravity. This results in not much more than a puddle of biomaterial. But when these sames components are used in space, they retain their shape.

However, without additional conditioning, once these new tissues return to Earth, they’d collapse just like there terrestrial counterparts. Here’s where BFF comes in.

In addition to launching a bioprinter, Techshot has also developed a means of curing the newly printed tissues. This way they will remain solid even after returning to Earth. The company says that the actual printing process will take less than a day, the strengthening process will take an estimated 12-45 days. It all depends on the tissue.

This could lead to less people dying as they wait on transplant lists, and it could also mean less dependency on anti-rejection medications. Assembling a whole human organ (such as a heart or lung) was once strictly science fiction. While it’s still a few years away, it is now a possibility.