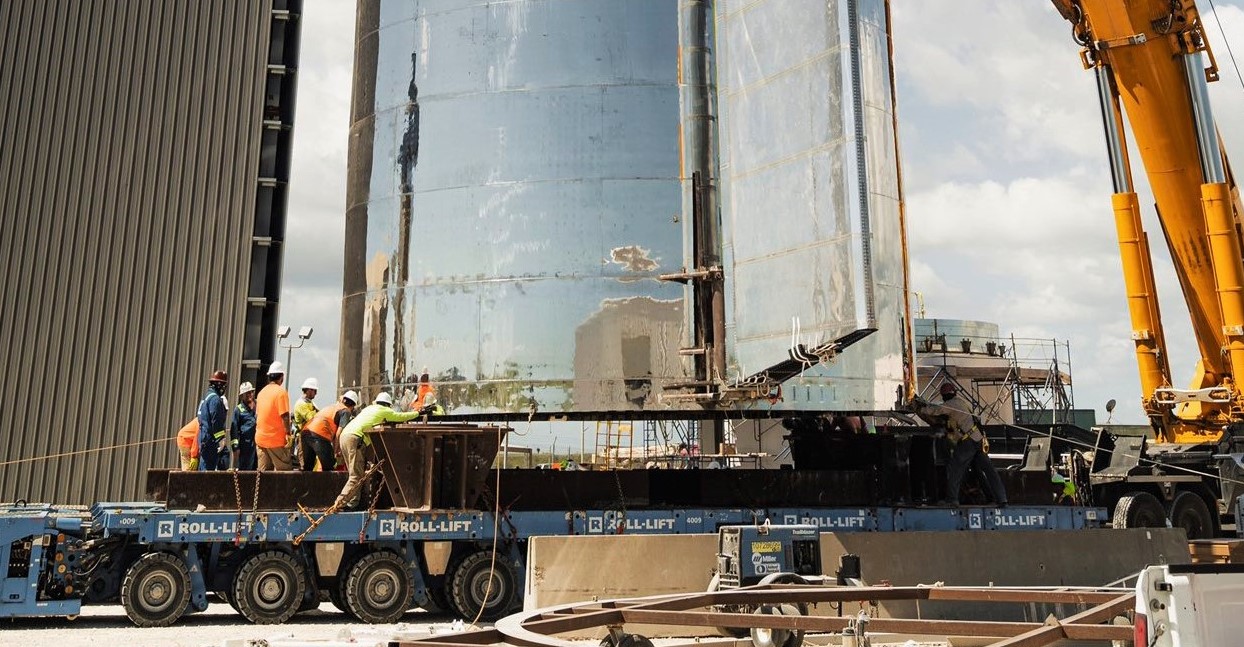 SpaceX CEO Elon Musk has teased new details and posted several new photos of Starship Mk1, taken on September 25th as employees worked to lift the spacecraft’s lower half onto a mobile transporter. Up next: stacking the rocket’s two halves to reach its final 50m (160 ft) height.

The company is currently working around the clock to complete Starship Mk1’s assembly and integration ahead of Elon Musk’s planned September 28th presentation, meant to provide a detailed update on the state of the next-generation rocket’s design and development. A huge amount of work clearly remains but SpaceX is making major, visible progress almost every single day along the path to Starship’s first flight tests.

Taken yesterday afternoon, Musk’s photos show scenes before and after technicians placed Starship Mk1’s lower half – its tank and propulsion section – on a ‘Roll-Lift’, a small transporter. It’s unclear why exactly this was done, but SpaceX moved the spacecraft prototype about 100m and then removed it from the transporter.

The most recent movement happened just a few hours ago – technicians used a crane delivered on September 24th to lift the half-Starship onto what looked like half a dozen steel blocks on the ground, all captured live on LabPadre’s 24/7 livestream. In order to install Starship Mk1’s separate landing legs, believed to attach somewhere inside the vehicle’s aft circumference, SpaceX likely needed to lift the aft section off the concrete mount that had been its home for the past several months.

Elon Musk also confirmed that Starship Mk1 will have six landing legs, another strong indicator that the ongoing Thursday morning work is focused on preparing Starship Mk1 for leg installation. According to Musk, Starship Mk1 will weigh as much as 200 metric tons (440,000 lb) empty, which is probably why the rocket prototype’s aft – and heaviest – half had to be loaded onto a Roll-Lift and could not simply be moved by the crane itself.

Starship’s updated design remains a bit of a mystery just two days before Elon Musk is scheduled to present an update, likely including new renders from SpaceX itself. It remains to be seen if Starship’s six landing legs will be fixed (versus retractable) or if the legs on the windward side of the ship will jut out into the airstream. To ensure stability when landing on unprepared terrain, as Musk described, six legs are certainly better than three, but the actual span of those legs is a more relevant determinant of stability. Wide, Falcon 9-style legs would be optimal, indicating that the final ship will likely lean towards legs that can be retracted or at least angled behind Starship’s reentry ‘shadow’.

Still a prototype (and possibly meant solely for suborbital operation), Starship Mk1 (and Mk2) may feature simplified legs and mechanisms to speed things along, serving as more of a rough draft while Starhopper was akin to a Starship abstract or prospectus. At this rate, we won’t have to wait very long at all to find out.