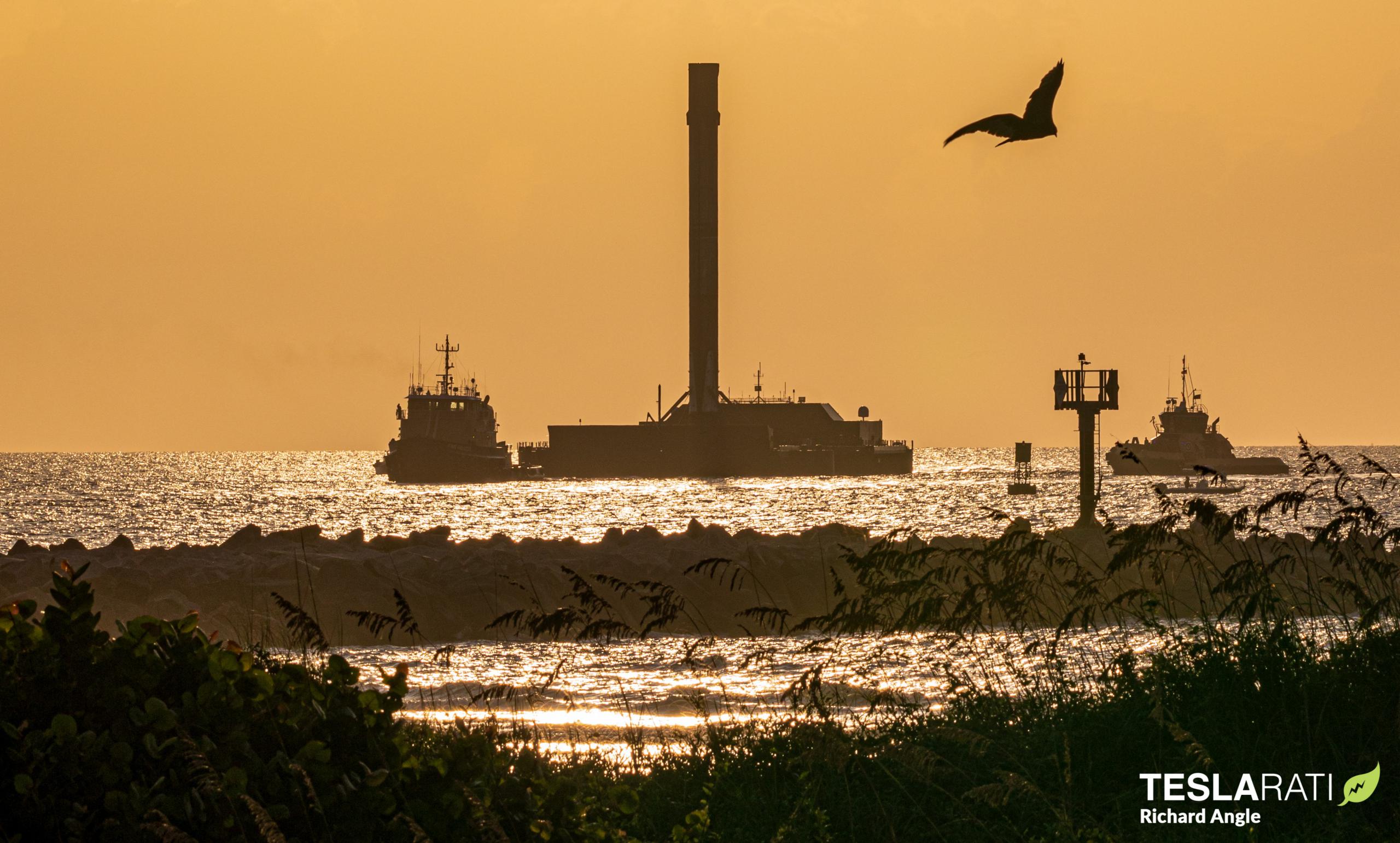 In a pleasant coincidence, the brand new drone ship was greeted by an even newer member of SpaceX’s rocket recovery fleet, which had arrived just hours before after bidding farewell to the Louisiana port it was upgraded at the week prior. Named after Doug Hurley and Bob Behnken, the NASA astronauts that helmed Crew Dragon on its crewed orbital launch debut, Doug was the first to arrive and reached its Port Canaveral berth around 9pm EDT on August 30th. Returning to port with a rocket on board for the first time, drone ship ASOG berthed beside Doug just 12 hours later.

Side by side, ASOG and Doug effectively represent the next evolution of at-sea recovery for SpaceX, a company famous for continuously striving for improvement and optimization.

Notably, confirmed unequivocally by a SpaceX engineer during NASA’s CRS-23 pre-launch briefing, a mission that was also ASOG’s very first, the drone ship has been designed to navigate to the correct position, precisely station-keep during landing, secure the landed booster, and transport that booster back to port “completely autonomously.” Up to now, every one of SpaceX’s 76 at-sea landing attempts to date has required a tugboat to tow the drone ship to the recovery zone and a second ship (usually GO Quest or NRC Quest) to support the crew of SpaceX technicians that maintain the drone ship, fix problems, and secure landed boosters.

In 2017, SpaceX improved those procedures to a degree and debuted a robot known as Octagrabber on drone ship Of Course I Still Love You (OCISLY). Designed to remotely grab the same Falcon booster ‘hold-down’ hardpoints used by the launch pad, Octagrabber allows SpaceX’s recovery team to remain safe aboard their support ship, avoiding the undeniable danger of working in close proximity to a sliding 25 ton (~50,000 lb) object in all but the worst conditions.

While Octagrabber has undeniably been a boon for the recovery crew, all SpaceX ocean recoveries since have still required tugboats and a crew support ship. Now, thanks to unspecified upgrades, SpaceX believes that A Shortfall of Gravitas will be able to recover Falcon boosters with zero human intervention. It’s likely that SpaceX will still need to arrange a tugboat and pilot to take ASOG to and from the mouth of Port Canaveral and humans will certainly still be involved in the process of retracting landing legs and lifting boosters off the drone ship, but what SpaceX proposes would still be a major upgrade.

However, perhaps the biggest hurdle for SpaceX to operate truly autonomous drone ships will be securing regulatory approval to do so. Perhaps anticipating that gap between technical and legal readiness, SpaceX has bought two new support ships – Bob and Doug – outright. Set to be the largest traditional ships in SpaceX’s fleet, Bob and Doug appear to be designed to do it all. Each outfitted with a large crane and winch, both ships should be able to recover Falcon fairings, tow drone ships, and host crews of technicians (if needed). Additionally, they appear to have space for a helipad and could potentially be modified to triple as Dragon recovery assets.

In other words, even if it takes a while before ASOG and Just Read The Instructions (JRTI) are able to operate autonomously, Bob and Doug should feasibly allow SpaceX to save money on recovery operations by combining fairing recovery, tugboat, and crew support roles into one vessel.