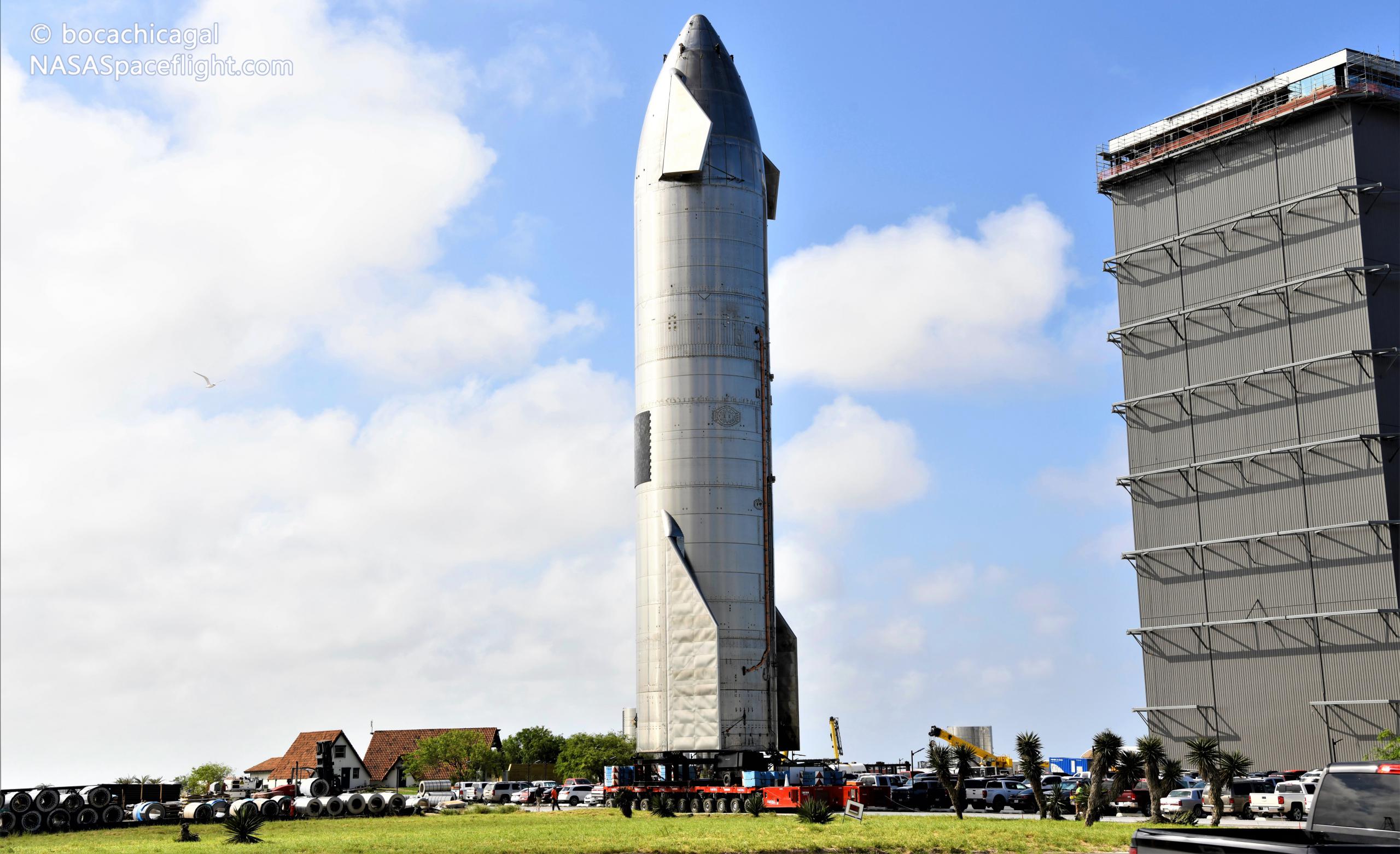 SpaceX has moved Starship SN15 to a lot near its Texas factory's scrapyard, hinting at a likely retirement for the historic rocket. (NASASpaceflight - bocachicagal)

While SpaceX has spent the better part of three weeks inspecting the first flight-proven Starship to survive a high-altitude launch and landing, the company appears to have decided to retire the rocket instead of flying it again.

On May 25th, four days after Starship serial number 15 (SN15) was reinstalled on one of SpaceX’s two suborbital launch mounts, a crane was attached to its nose and a transporter staged beside it. One day later, the historic Starship prototype was lifted off of Mount B, installed on that transporter, and rolled away from the launch pad and back towards SpaceX’s Boca Chica, Texas Starship factory.

The day after Starship SN15 was reinstalled on a launch mount, giving SpaceX unrestricted access to its aft, all three of the rocket’s flight-proven Raptor engines – the first of their kind to survive the flight profile intact – were removed. Given the significant value of tearing down and inspecting the first flight-proven high-altitude Raptors, that removal was likely guaranteed regardless of the future of SN15, though it certainly left the Starship at a crossroads.

Having already had its six used landing legs removed, Starship SN15 was left more or less declawed on the launch mount as fans watched with bated breath to see if new legs or engines would be installed. For better or worse, while CEO Elon Musk did indicate that SpaceX “might try to refly SN15 soon” less than two days after its historic landing, it quickly became clear that the company had decided against reuse.

To a degree, especially if SN15’s flight-proven Raptor engines were rendered unusable – as they appear to have been – by exposure to water immediately after touchdown, “reusing” the Starship would be more symbolic than anything. With a thorough inspection, it would be easy enough to determine that the Starship’s structures and mechanical/hydraulic systems would be up for a second launch, but the slow ~10 km (6.2 mi) flight profile ships SN8 through SN11 and SN15 completed was already only relevant for testing Starship’s exotic, unproven method of landing.

In that sense, another fully successful ~10-km launch and landing would only benefit Starship development insofar as it would increase confidence in the landing profile by proving that the first success wasn’t a fluke – however incredibly unlikely that might be. Of note, SpaceX also has not plans to recover the first space-proven Starship, instead (nominally) performing a soft-landing in the Pacific Ocean if the prototype makes it through its inaugural spaceflight without issue.

If that “Orbital Test Flight” is a perfect success, SpaceX will likely have enough confidence – and regulators enough data – to proceed to the first attempt to recover an orbital Starship on land. In the meantime, with orbital launch site buildup now moving at a breakneck pace and tens of millions of dollars of custom pad hardware, giant cranes, and months of work sitting a few hundred feet away from the landing pad, attempting to push the envelope with SN15 likely just isn’t worth the risk.

SN15 is also a historic piece of hardware after its successful landing and there are signs – namely the location SpaceX has moved the rocket to – that the Starship will be put on permanent display beside the factory that built it. There’s a limited possibility that Starship SN16 – all but finished – could be sent to the launch site instead of heading straight to the scrapyard, but any testing would necessarily delay orbital pad construction and any flight activity would likely have to expend SN16 in the ocean rather than risk a land landing.

Ultimately, it’s looking more and more likely that SpaceX would rather go all-in on Starship’s inaugural orbital launch attempt, even if that means little to no ground or flight test availability for a few months.