SpaceX’s iconic Falcon 9 payload fairing recovery ship, known as Mr Steven, has been spotted in California’s Port of San Pedro having new arms installed with two cranes and a crew of SpaceX technicians. Aside from the sudden addition of dramatically different arm design, a large inflatable structure also took shape – seemingly overnight – right behind Mr Steven, the purpose of which is entirely unclear.

Incredibly, these massive new arms and their new equally large support struts and base plates have begun installation barely two weeks after Mr Steven took roost and had his old arms removed at SpaceX’s Berth 240 property. While the timeline of the arm and net upgrades – mentioned by CEO Elon Musk several weeks ago – was previously uncertain, the incredibly quick turnaround from old arm removal to new arm install suggests that SpaceX may, in fact, be aiming to have Mr Steven ready for recovery operations as early as Iridium-7, scheduled for launch on July 20th. In all likelihood, the fairing recovery vessel will be held up till the subsequent Vandenberg Air Force Base launch while a net with an area perhaps four times larger is custom-built for SpaceX.

A massive inflatable structure appeared out of nowhere at Berth 240 roughly four days after Teslarati photographer Pauline Acalin had last checked up on the facility. (Pauline Acalin)

Nevertheless, SpaceX’s speed rarely fails to surprise, and it’s entirely possible that a new, larger net was already ordered some time ago in preparation for the eventuality that Mr Steven’s first recovery mechanism was unsuccessful. Given the fact that at least two main arms and perhaps eight white, cylindrical struts have apparently been completed and are awaiting installation at Berth 240, it’s probable that the lead time on this new recovery mechanism stretches back at least several months, likely at least a month before Musk mentioned that Mr Steven would have its usable catching area grown “by a factor of [four]” in early June.

Yup, we are extending the net area by a factor of 4

With four times the net available to catch wayward Falcon 9 payload fairings, SpaceX may be able to finally close the gap between Mr Steven and the successful and routine recovery and reuse of the second of three main Falcon 9 (and Heavy) components. At roughly 10% of the total cost (not price) of a single-booster Falcon 9, the considerable effort being put into the recovery of carbon-composite payload fairings is in a way motivated more by manufacturing bottlenecks than by the money it will save SpaceX (somewhat less than $3m per half). 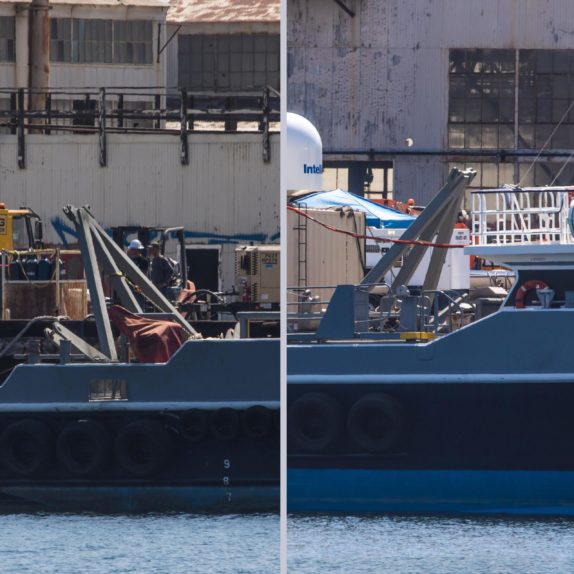 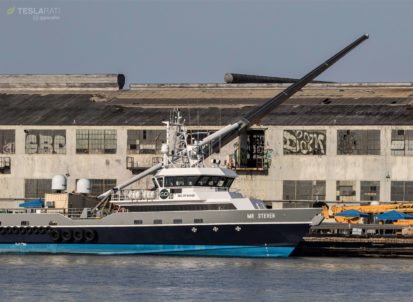 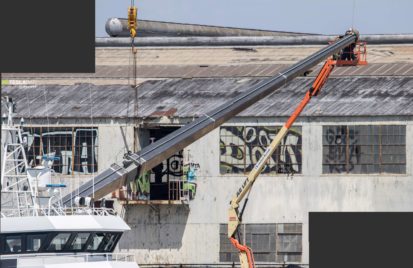 SpaceX’s team of composite technicians and engineers will need to reliably fabricate as many as ~50 payload fairing halves in 2018, effectively one half each week

By recovering payload fairings before they touch the ocean surface, the company may – in one fell swoop – be able to dramatically reduce the operational expenditure required to sustain the annual production of dozens of Falcon fairings, each of which requires an inescapable and tediously slow stint in a massive autoclave, only a few of which can be squeeze into the company’s Hawthorne factory. As an example, SpaceX’s team of roughly 150 dedicated composite technicians and engineers will need to reliably fabricate as many as ~50 payload fairing halves – nearly a full half each week – to sustain SpaceX’s anticipated 2018 manifest of 24-28 launches, excluding three Cargo Dragon resupply missions that don’t need fairings.

While both Crew and Cargo Dragon spacecraft and trunks contain a large proportion of carbon fiber-composite structures, every composite Falcon 9 interstage that rolled off of the assembly line since February 2018 is part of a Block 5 booster and is thus expected to support a bare minimum of several missions on its own, functionally multiplying the useful output of any given production line even while the amount of work (and thus work-hours) is reduced. While Falcon 9 boosters – making up roughly 70% of the cost of the entire rocket – have been successfully upgraded to support several reuses each, SpaceX still has to produce a new payload fairing and upper stage for each launch. A spectacular Block 4 farewell earlier this month – complete with a recoverable booster expended to make way for Block 5 – simply served to emphasize the company’s desire to mitigate the expandability of both (currently) unreusable segments of Falcon 9.

Meanwhile, the purpose of this massive inflatable ring is almost entirely unclear, as it would appear to be redundant with the initial installation of Mr Steven’s new recovery mechanism. (Pauline Acalin) 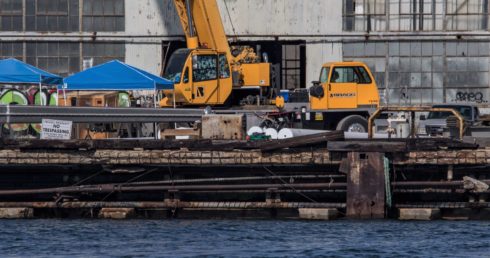 Arm installation will presumably continue over the course of the week, hopefully reaching completion in time to recovery Iridium-7’s payload fairing. (Pauline Acalin)

If Mr Steven can recover even a small fraction – say 25% – of SpaceX payload fairings launched annually, the exact same level of effort (and thus capital) could support 25% more launches annually or reduce the work hours spent on fairing production by 25%. As it happens, SpaceX’s next-generation rocket (BFR) happens to be built (theoretically) almost entirely out of carbon-composites, from the propellant tanks to the spaceship’s delta wing.

Originally meant to focus on the wholly unexpected appearance of a giant inflatable structure at Berth 240, SpaceX’s breakneck pace of action abruptly recentered it on the equally unexpected installation of one the vessel’s first upgraded arms, meant to support a net that could be as much as four times larger than its predecessor. That symbolism on its own is a worthy representation of some of the best aspects of SpaceX’s world-class team of engineers and technicians, acting as a slightly more on-topic corollary to the equally rapid design, prototyping, fabrication, and testing of ad-hoc ‘submarines’ intended to help a number of Thai children currently trapped in a cave near the country’s border with Myanmar/Burma.