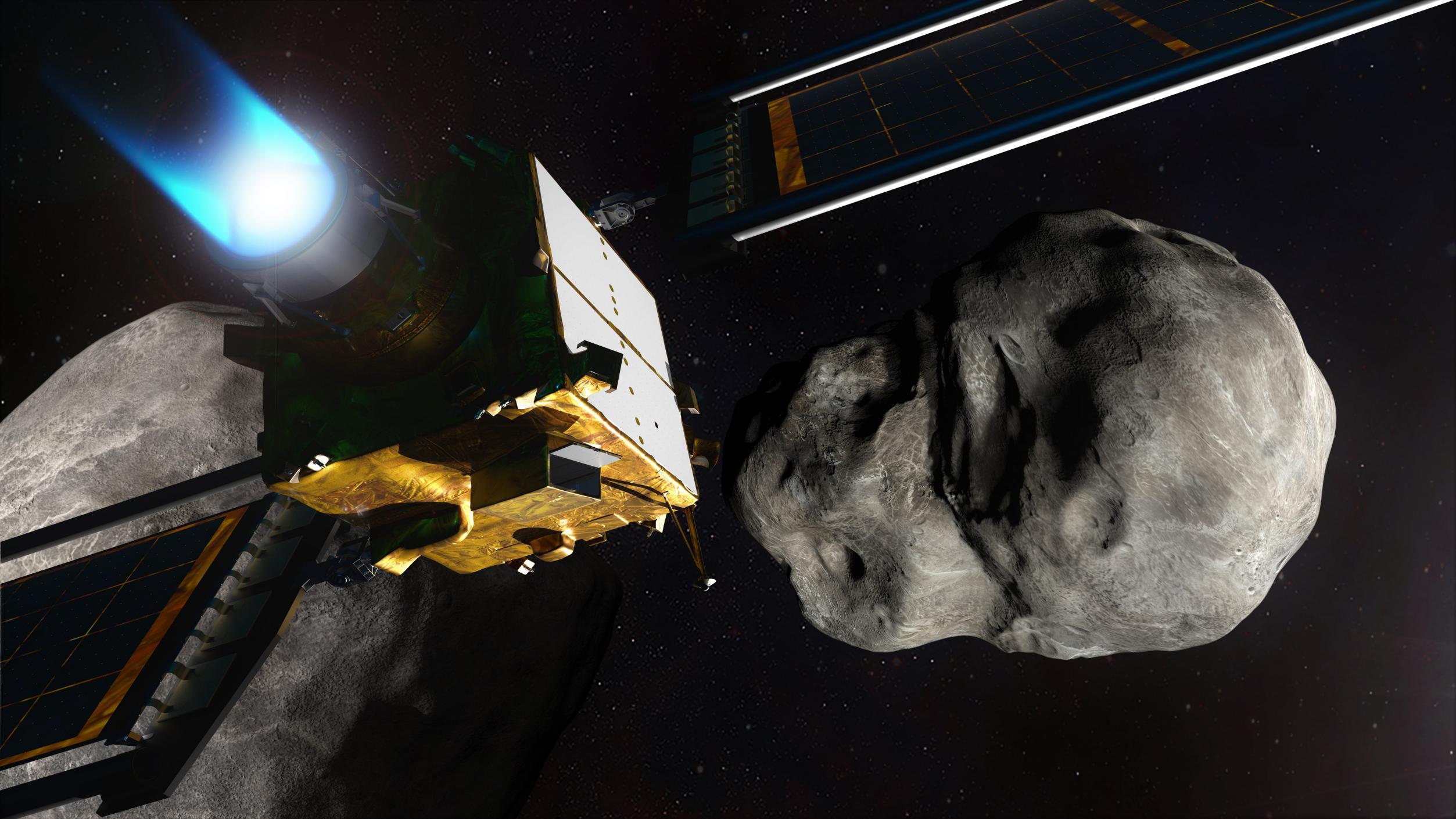 Update: The NASA official quoted saying that the DART spacecraft had arrived at Vandenberg on September 27th appears to have been incorrect and may have accidentally confused the arrival of an “advance team” with the arrival of the spacecraft itself.

Science communicator and author David Brown was reportedly on-site on September 29th to watch as the DART spacecraft was carefully packaged for the journey from Maryland’s Johns Hopkins University to its California launch site, obviously making a VSFB arrival two days prior impossible. Nevertheless, now stowed inside an environmentally-controlled shipping container, DART should still arrive at Vandenberg within the next week or two.

Revealed as a side note during live coverage of the space agency’s successful Landsat-9 launch, NASA says that the Double Asteroid Redirect Test (DART) spacecraft has arrived at Vandenberg Space Force Base (VSFB) ahead of a SpaceX Falcon 9 launch less than two months from now.

Weighing around 690 kg (~1500 lb) at liftoff, NASA confirmed that the DART spacecraft and its Italian-built LICIACube smallsat companion are on track to launch out of SpaceX’s VSFB SLC-4E pad on a Falcon 9 rocket no earlier than (NET) November 23rd, 2021. Carrying its small passenger, DART will then make a beeline for binary asteroid pair Didymos and Dimorphos. Respectively measuring around 800 and 170 meters across, DART will ultimately target the smaller of the pair and accelerate to an impact velocity of ~6.6 km/s (4 mi/s or Mach 19).

DART will then rely on a built-in telescope and closed-loop targeting software to home in on and smash into Dimorphos, ultimately using the tiny asteroid system as a sort of sandbox to test theories of asteroid redirection that might one day help humans prevent catastrophic impacts with Earth.

Originally targeted to launch in June 2021 when NASA awarded SpaceX the $69M launch contract (now up to $73M after two small changes) in April 2019, DART has slipped approximately five months in the 2.5 years since when a few minor technical issues arose late in development. Impressively, almost none of those delays appear to have been caused by the COVID-19 pandemic, which cannot be said for a number of other NASA, US military, and commercial satellites and launches.

Set to cost a total of ~$250M including launch services, DART’s main purpose is to determine how exactly an asteroid behaves when impacted by a high-velocity spacecraft. Whereas depictions of asteroid “redirection” in popular science fiction tend to lean towards the “send an arsenal of nuclear bombs” approach, the reality is that bombing most asteroids and comets large enough to threaten the surface of Earth would add uncertainty more than it would mitigate the threat.

Given how little is actually known about the physical characteristics of asteroids, attacking one with a bomb could simply separate a killer asteroid into any number of smaller, still-deadly asteroids – now spread into a shotgun-like pattern of undetectable fragments instead of one large, visible object. Instead, most modern science on the matter now believes that the best route to redirection is a combination of early detection and a (relatively) low-energy impact. A bit like the concept of the butterfly effect, a relatively gentle impact (still akin to 2.5 tons of TNT with DART) years or decades in advance could drastically change the trajectory of the threatening asteroid or comet, causing it to miss Earth. DART won’t directly prevent an asteroid from impacting Earth but hitting the asteroid moon of a larger asteroid should effectively magnify the effect the tiny impact has on its orbital characteristics.

DART will also serve as a technology demonstration, debuting both satellite-class roll-out solar arrays and NASA’s self-developed NEXT-C electric propulsion system. With any luck, it will also help scientifically prove that humans could use a similar approach to save ourselves from a catastrophic space impact event years or decades from now.