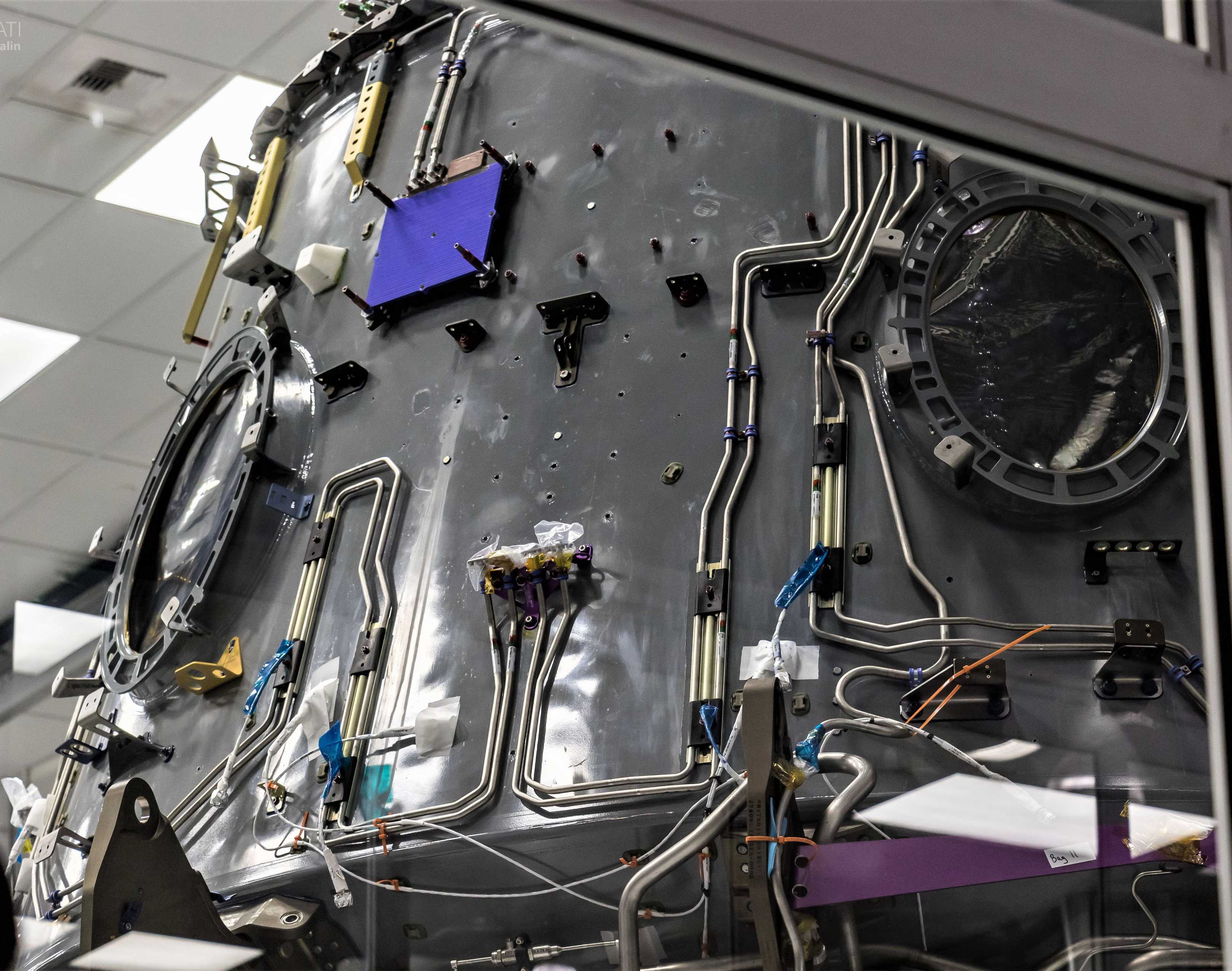 According to program manager Kathy Lueders, SpaceX has chosen against reusing its upgraded Crew Dragon spaceships on NASA Commerical Crew Program (CCP) launches, even though NASA itself explicitly provided both CCP providers (Boeing and SpaceX) the option to propose reflights of crew capsules.

In fact, Boeing did just that with their CST-100 Starliner spacecraft, proposing to land Starliners on land (using airbags) and reuse the capsules repeatedly, up to 10 times each. While there is next to no official information on the matter, the question of what SpaceX is planning to do with its flight-proven Crew Dragon spacecraft is well worth puzzling over.

The Crew Dragon capsule for the SpaceX DM-1 mission will be launch ready by the end of September. pic.twitter.com/xsGw9fWkUG

The future of flight-proven Dragon 2s

Speaking at the most recent (August 27) NASA Advisory Council meeting, Lueders specifically stated that SpaceX had proposed “a new vehicle every time for [NASA]”, although NASA specifically provided the option for either new or reflown hardware, similar to Commercial Cargo where SpaceX already routinely reflies both Falcon 9s and Cargo Dragons on official NASA resupply missions.

The fact that SpaceX already routinely reuses Cargo Dragons – and even does so atop flight-proven Falcon 9 rocket boosters – adds additional intrigue to this seemingly odd decision. However, in the context of other near-term plans for other Dragon-related activities, SpaceX’s choice to not (at least in the near-term) refly Crew Dragon capsules for crewed NASA launches makes more than a little sense. 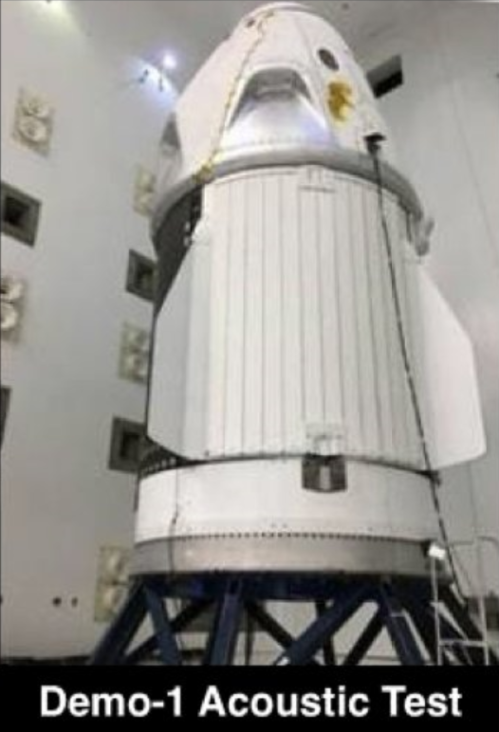 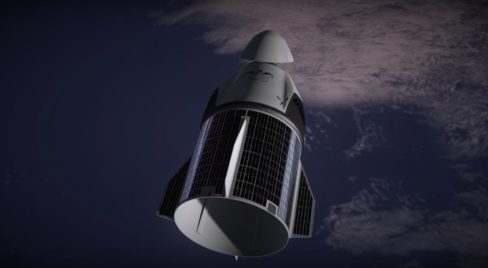 The single most obvious explanation can be found in SpaceX’s next Commercial Resupply Services contract (CRS-2), a similar follow-up to the CRS-1 contract SpaceX is currently launching Cargo Dragons under. Although SpaceX offered its Dragon 1 (already flying) as an option, NASA sided with Dragon 2 thanks to a number of unique and valuable capabilities offered by the upgraded craft. While no official detail has been released by NASA on the gritty specifics of those CRS-2 contracts, an April 2018 report from the Office of the Inspector General (OIG) offers a bit more insight into SpaceX’s plans.

Although the OIG report in question never specifically states it, some of the language used to describe Dragon 2’s cargo configuration does seem to imply that Cargo Dragon 2s will predominately (if not exclusively) be derived as slightly-modified Crew Dragon capsules, seemingly indicating that SpaceX’s CRS-2 missions may only ever launch flight-proven Crew Dragon capsules. Depending on the extent of the disassembly required to remove the components described below, all other “modifications” are essentially one-and-done after the software and additional designs are completed. As such, it should be relatively straightforward to modify the vehicles between Crew and Cargo configurations. 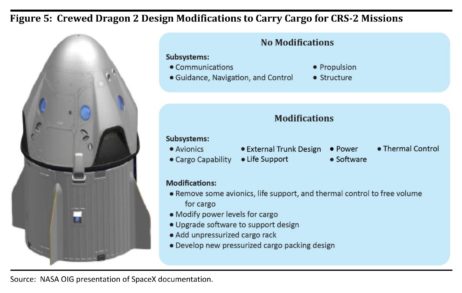 An overview of the expected modifications needed to turn a Crew Dragon into a Cargo Dragon 2. (NASA OIG) 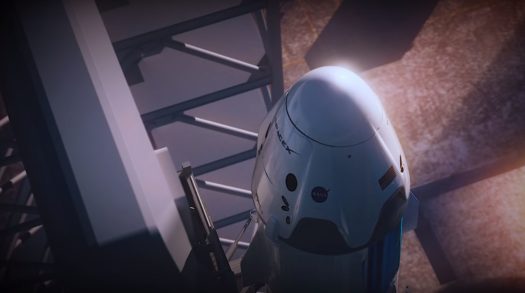 This strategy would make a lot of sense: by using its Commercial Crew contract as a means to fund the construction of brand new Crew Dragon capsules and Falcon 9 rockets and then using those once flight-proven rockets and spacecraft for other NASA cargo launches, general commercial missions, and maybe even low Earth orbit tourism, SpaceX can likely extract as much value and utility as possible from that hardware.

Despite the fact that NASA in this situation would effectively be carrying a significant portion of SpaceX’s non-BFR production-related capital expenditure, the company’s CRS-2 and Commercial Crew contracts place its cargo and crew launch costs far below those of competitors Boeing, Orbital ATK (now Northrop Grumman Innovation Systems), and Sierra Nevada. Overall, SpaceX’s launch costs to NASA range anywhere from 40-75% less than its three competitors’ best offerings, essentially invalidating any nitpicking over slight cost increases from CRS-1 to CRS-2.

Even if SpaceX never ends up reusing Crew Dragons on crewed NASA launches, NASA is still likely to benefit from lower costs derived by the partial modification and reuse of those same capsules and Falcon 9 boosters on CRS-2 cargo resupply missions.